Arrival of the Normans

Conquest of Amalfi and Salerno

First Norman invasion of the Balkans

Second Norman invasion of the Balkans

Third Norman invasion of the Balkans

The Norman conquest of southern Italy, also known as The Kingdom In The Sun, lasted from 999 to 1139, involving many battles and independent conquerors. In 1130, the territories in southern Italy united as the Kingdom of Sicily, which included the island of Sicily, the southern third of the Italian Peninsula (except Benevento, which was briefly held twice), the archipelago of Malta, and parts of North Africa.

Arrival of the Normans

The earliest reported date of the arrival of Norman knights in southern Italy is 999, although it may be assumed that they had visited before then. In that Year, according to some traditional sources of uncertain origin, Norman pilgrims returning from the Holy Sepulchre in Jerusalem via Apulia stayed with Prince Guaimar III in Salerno. The city and its environs were attacked by Saracens from Africa demanding payment of an overdue annual tribute. While Guaimar began to collect the tribute, the Normans ridiculed him and his Lombard subjects for cowardice, and they assaulted their besiegers. The Saracens fled, booty was confiscated and a grateful Guaimar asked the Normans to stay.

In 1024, Norman mercenaries under Ranulf Drengot were in the service of Guaimar III when he and Pandulf IV besieged Pandulf V in Capua. In 1026, after an 18-month siege, Capua surrendered and Pandulf IV was reinstated as prince. During the next few years Ranulf would attach himself to Pandulf, but in 1029 he joined Sergius IV of Naples (whom Pandulf expelled from Naples in 1027, probably with Ranulf's assistance).
Source:Wikipedia Link
1029 Jan 1

Ranulf and Sergius recaptured Naples. In early 1030 Sergius gave Ranulf the County of Aversa as a fief, the first Norman lordship in southern Italy. Norman reinforcements and local miscreants, who found a welcome in Ranulf's camp with no questions asked, swelled Ranulf's numbers. In 1035, the same Year William the Conqueror would become Duke of Normandy, Tancred of Hauteville's three eldest sons (William "Iron Arm", Drogo and Humphrey) arrived in Aversa from Normandy.

In 1038 Byzantine Emperor Michael IV launched a military campaign into Muslim Sicily, with General George Maniaches leading the Christian army against the Saracens. The future king of Norway, Harald Hardrada, commanded the Varangian Guard in the expedition and Michael called on Guaimar IV of Salerno and other Lombard lords to provide additional troops for the campaign.

The Normans in Italy, led by William Iron Arm, succeeded in defeating the Byzantians in the Battles of Olivento and Montemaggiore.1041
Source:Wikipedia Link
1053 Jun 18

The Battle of Civitate was fought on 18 June 1053 in southern Italy, between the Normans, led by the Count of Apulia Humphrey of Hauteville, and a Swabian-Italian-Lombard army, organised by Pope Leo IX and led on the battlefield by Gerard, Duke of Lorraine, and Rudolf, Prince of Benevento. The Norman victory over the allied papal army marked the climax of a conflict between the Norman mercenaries who came to southern Italy in the eleventh century, the de Hauteville family, and the local Lombard princes.
Source:Wikipedia Link
1059 Jan 1

The Norman explorer, Robert Guiscard had conquered much of Italy and was invested by Pope Nicholas II as duke of Apulia, Calabria and Sicily.
Source:Wikipedia Link
1061 Jan 1

After 250 years of Arab control, Sicily was inhabited by a mix of Christians, Arab Muslims, and Muslim converts at the time of its conquest by the Normans. Arab Sicily had a thriving trade network with the Mediterranean world, and was known in the Arab world as a luxurious and decadent place. It had originally been under the rule of the Aghlabids and then the Fatimids, but in 948 the Kalbids wrested control of the island and held it until 1053. During the 1010s and 1020s, a series of succession crises paved the way for interference by the Zirids of Ifriqiya. Sicily was racked by turmoil as petty fiefdoms battled each other for supremacy. Into this, the Normans under Robert Guiscard and his younger brother Roger Bosso came intending to conquer; the pope had conferred on Robert the title of "Duke of Sicily", encouraging him to seize Sicily from the Saracens.

Cerami, Italy
Roger I of Sicily at the Battle of Cerami

The Battle of Cerami was fought in June 1063 and was one of the most significant battles in the Norman conquest of Sicily, 1060–1091. The battle was fought between a Norman expeditionary force and a Muslim alliance of Sicilian and Zirid troops. The Normans fought under the command of Roger de Hauteville, the youngest son of Tancred of Hauteville and brother of Robert Guiscard. The Muslim alliance consisted of the native Sicilian Muslims under the Kalbid ruling class of Palermo, led by Ibn al-Hawas, and Zirid reinforcements from North Africa led by the two princes, Ayyub and 'Ali.The battle was a resounding Norman victory that utterly routed the opposing force, causing divisions amongst the Muslim aristocracy which ultimately paved the way for the eventual capture of the Sicilian capital, Palermo, by the Normans and subsequently the rest of the island.
Source:Wikipedia Link
1073 Jan 1

Conquest of Amalfi and Salerno

The fall of Amalfi and Salerno to Robert Guiscard were influenced by his wife, Sichelgaita. Amalfi probably surrendered as a result of her negotiations, and Salerno fell when she stopped petitioning her husband on behalf of her brother (the prince of Salerno). The Amalfitans unsuccessfully subjected themselves to Prince Gisulf to avoid Norman suzerainty, but the states (whose histories had been joined since the 9th century) ultimately came under Norman control.
Source:Wikipedia Link
1081 Jan 1

First Norman invasion of the Balkans

Led by the formidable Robert Guiscard and his son Bohemund of Taranto (later, Bohemund I of Antioch), Norman forces took Dyrrhachium and Corfu, and laid siege to Larissa in Thessaly (see Battle of Dyrrhachium)
Source:Wikipedia Link
1086 Mar 1

In 1085, he was finally able to undertake a systematic campaign. On 22 May Roger approached Syracuse by sea, while Jordan led a small cavalry detachment 15 miles (24 km) north of the city. On 25 May, the navies of the count and the emir engaged in the harbour—where the latter was killed—while Jordan's forces besieged the city. The siege lasted throughout the summer, but when the city capitulated in March 1086 only Noto was still under Saracen dominion. In February 1091 Noto yielded as well, and the conquest of Sicily was complete.
Source:Wikipedia Link
1091 Jun 1

The Norman invasion of Malta was an attack on the island of Malta, then inhabited predominantly by Muslims, by forces of the Norman County of Sicily led by Roger I in 1091.
Source:Wikipedia Link
1104 Jan 1

During the time of the First Crusade, the Byzantines were able to utilize, to some extent, Norman mercenaries to defeat the Seljuk Turks in numerous battles. These Norman mercenaries were instrumental in the capture of multiple cities. It is speculated that, in exchange for an oath of loyalty, Alexios promised land around the city of Antioch to Bohemond in order to create a buffer vassal state and simultaneously keep Bohemond away from Italy. However, when Antioch fell the Normans refused to hand it over, although in time Byzantine domination was established

Second Norman invasion of the Balkans

In 1147 the Byzantine empire under Manuel I Comnenus was faced with war by Roger II of Sicily, whose fleet had captured the Byzantine island of Corfu and plundered Thebes and Corinth. However, despite being distracted by a Cuman attack in the Balkans, in 1148 Manuel enlisted the alliance of Conrad III of Germany, and the help of the Venetians, who quickly defeated Roger with their powerful fleet

Third Norman invasion of the Balkans

Although the last invasions and last large scale conflict between the two powers lasted less than two years, the third Norman invasions came closer still to taking Constantinople. Then Byzantine Emperor Andronicos Komnenos had allowed the Normans to go relatively unchecked towards the Tessalonica. While David Komnenos had made some preparations in anticipation of the encroaching Normans, such as ordering reinforcement of the cities walls' and assigning four divisions to the cities' defense, these precautions proved insufficient. Only one of the four divisions actually engaged the Normans, resulting in the city being captured with relative ease by Norman forces. Upon gaining control of the city Norman forces sacked Thessalonica. The following panic resulted in a revolt placing Isaac Angelus on the throne. In the aftermath of the fall of Andronicus, a reinforced Byzantine field army under Alexios Branas decisively defeated the Normans at the Battle of Demetritzes. Following this battle Thessalonica was speedily recovered and the Normans were pushed back to Italy.
Source:Wikipedia Link
1185 Nov 7

The Battle of Demetritzes in 1185 was fought between the Byzantine army and the Normans of the Kingdom of Sicily, who had recently sacked the Byzantine Empire's second city, Thessalonica. It was a decisive Byzantine victory, which ended the Norman threat to the Empire.
Source:Wikipedia Link
1195 Jan 1

Unlike the Norman conquest of England (1066), which took a few years after one decisive battle, the conquest of southern Italy was the product of decades and a number of battles, few decisive. Many territories were conquered independently, and only later were unified into a single state. Compared to the conquest of England, it was unplanned and disorganised, but equally complete.

Institutionally, the Normans combined the administrative machinery of the Byzantines, Arabs, and Lombards with their own conceptions of feudal law and order to forge a unique government. Under this state, there was great religious freedom, and alongside the Norman nobles existed a meritocratic bureaucracy of Jews, Muslims and Christians, both Catholic and Eastern Orthodox. The Kingdom of Sicily thus became characterized by Norman, Byzantine, Greek, Arab, Lombard and "native" Sicilian populations living in harmony, and its Norman rulers fostered plans of establishing an empire that would have encompassed Fatimid Egypt as well as the crusader states in the Levant.

The Norman conquest of southern Italy began an infusion of Romanesque (specifically Norman) architecture. Some castles were expanded on existing Lombard, Byzantine or Arab structures, while others were original constructions. Latin cathedrals were built in lands recently converted from Byzantine Christianity or Islam, in a Romanesque style influenced by Byzantine and Islamic designs. Public buildings, such as palaces, were common in larger cities (notably Palermo); these structures, in particular, demonstrate the influence of Siculo-Norman culture.

Roger I of Sicily

Bohemond I of Antioch 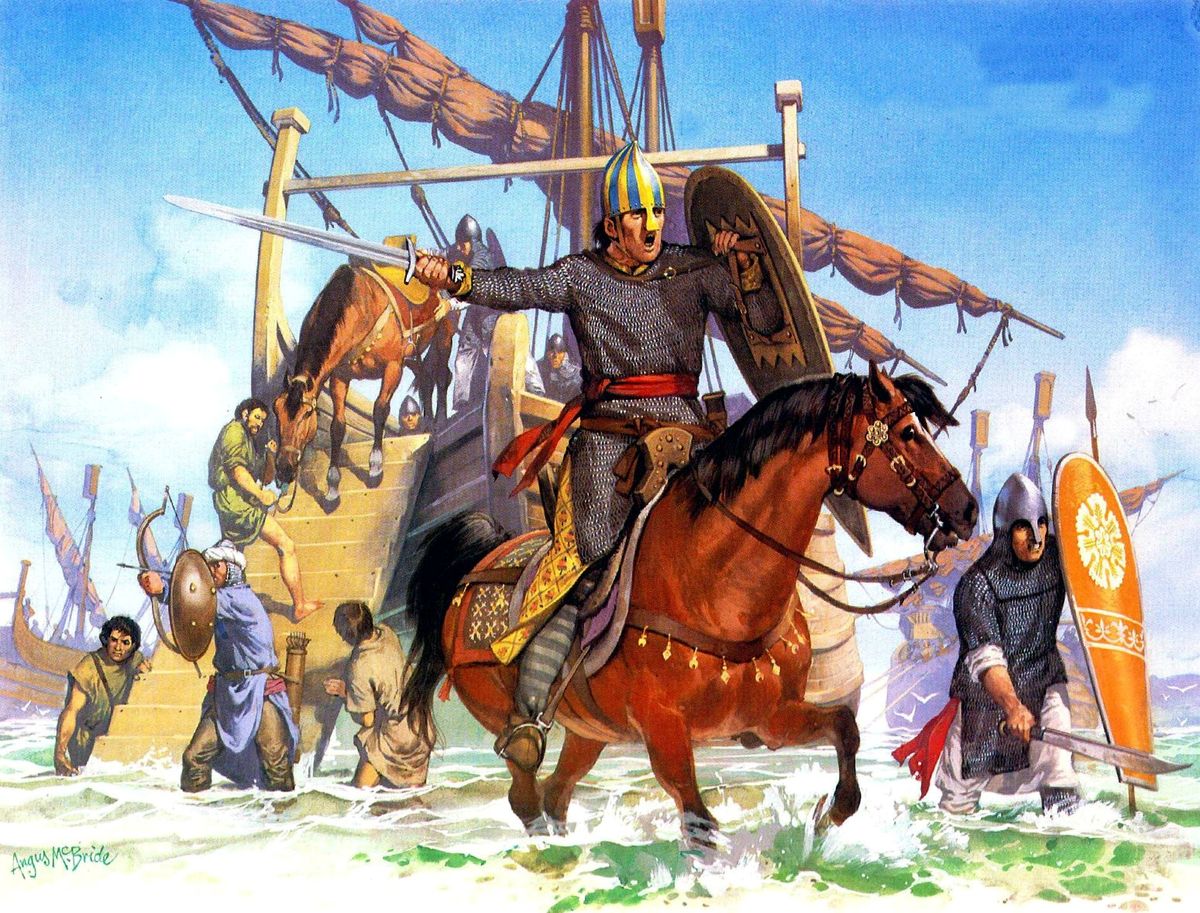 How well do you know the Norman Conquest of Southern Italy?
Play Timelines