Rumelia: Colonization of the Martiza Valley

Bulgarians become vassals to the Ottomans

History of the Ottoman Empire: Murad I

Murad I (مراد اول‎) was the Ottoman Sultan from 1362 to 1389. He was a son of Orhan Gazi and Nilüfer Hatun. Murad I came into the throne after his elder brother Süleyman Pasha's death.

Following the capture of Gallipoli by the Ottomans in 1354, Turkish expansion in the southern Balkans was rapid. The main target of the advance was Adrianople, which was the third most important Byzantine city (after Constantinople and Thessalonica). The date of Adrianople's fall to the Turks has been disputed among scholars due to the differing accounts in the source material. After the conquest, the city was renamed Edirne.The conquest of Adrianople was a turning point in the history of the Ottomans in Europe. Instead, the transformation of Adrianople into the new Ottoman capital of Edirne signalled to the local populace that the Ottomans intended to settle permanently in Europe.

Rumelia: Colonization of the Martiza Valley

Orhan and Murad settled numerous turks and muslims in Edirne in the Maritza Valley. This is when we start hearing of the term 'timars' and 'timariots'. (see appendix) The timar system guaranteed a source for Turkish cavalry for the sultan's army. This colonization resulted around Southeastern Europe, which would eventually be known as Rumelia. Rumelia would become a second heartland and central to the Ottoman state. In some ways, it became more important than Anatolia. The mineral and timber resources from this new land gave later Ottomans sultans the means to conquer the rest of Anatolia.
Source:Wikipedia Link
1365 Jan 1 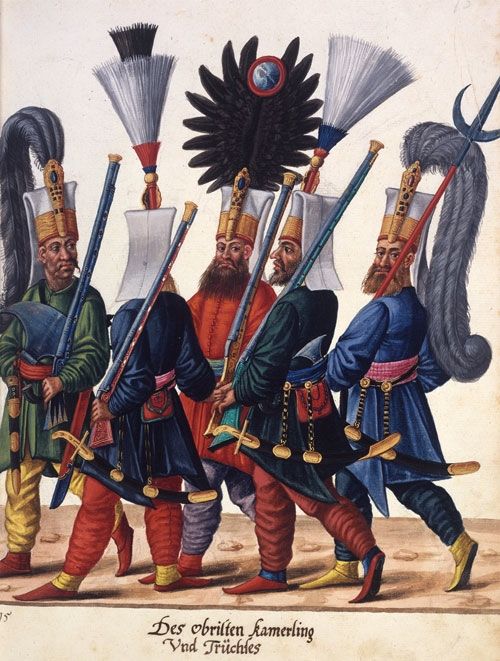 The formation of the Janissaries has been dated to the reign of Murad I. The Ottomans instituted a tax of one-fifth on all slaves taken in war, and it was from this pool of manpower that the sultans first constructed the Janissary corps as a personal army loyal only to the sultan. From the 1380s to 1648, the Janissaries were gathered through the devşirme system, which was abolished in 1638. This was the taking (enslaving) of non-Muslim boys, notably Anatolian and Balkan Christians. Later, those from the territories what is now Albania, Bosnia, and Bulgaria were preferred.

Thrace
Fresco on the walls of a hall in the episcopal palace at Colle Val d'Elsa, depicting the departure of barons on a crusade.

By 1370 Murad controlled most of Thrace, bringing him into direct contact with Bulgaria and the southeastern Serbian lands ruled by Uglješa. Uglješa, the most powerful Serb regional ruler, unsuccessfully attempted to forge an anti-Ottoman alliance of Balkan states in 1371. Byzantium, vulnerable to the Turks because of its food supply situation, refused to cooperate. Bulgaria, following Ivan Aleksandar's death early that Year, lay officially divided into the "Empire" of Vidin, ruled by Stratsimir (1370–96), and Aleksandar's direct successor Tsar Ivan Shishman (1371–95), who ruled central Bulgaria from Turnovo. Young, his hold on the throne unsteady, threatened by Stratsimir, and probably pressured by the Turks, Shishman could not afford to participate in Uglješa's scheme. Of the regional Serb bojars, only Vukašin, protector of Uroš and Uglješa's brother, joined in the effort. The others either failed to recognize the Ottoman danger or refused to participate lest competitors attacked while they were in the field.

The Savoyard crusade was a crusading expedition to the Balkans in 1366–67. It was born out of the same planning that led to the Alexandrian Crusade and was the brainchild of Pope Urban V. It was led by Count Amadeus VI of Savoy and directed against the growing Ottoman Empire in eastern Europe. Although intended as a collaboration with the Kingdom of Hungary and the Byzantine Empire, the crusade was diverted from its main purpose to attack the Second Bulgarian Empire. There the crusaders made small gains that they handed over to the Byzantines. It did take back some territory the Ottomans in the vicinity of Constantinople and on Gallipoli. 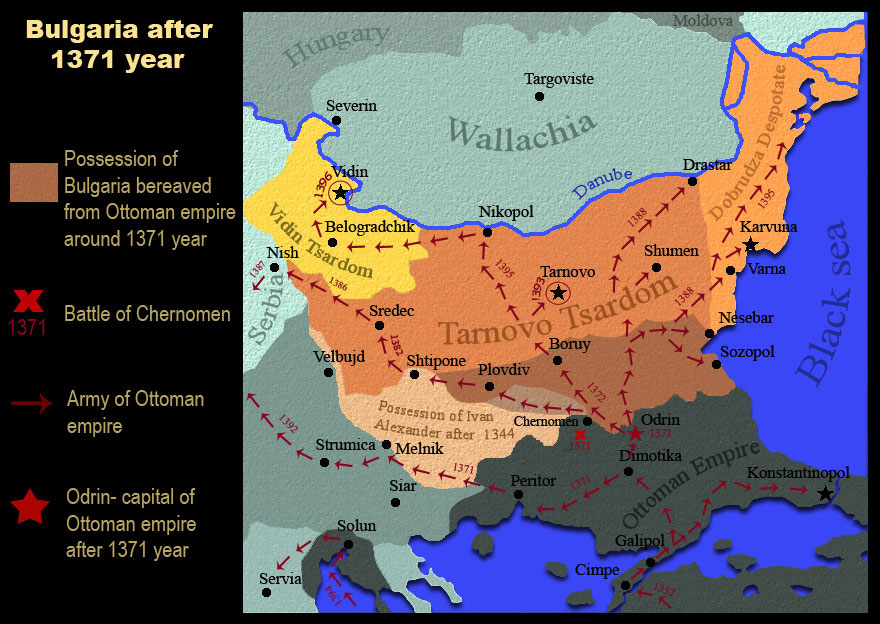 Ugljesa, a Serbian despot realized the danger posed by the Ottoman turks who were getting close to his lands and tried to create a coalition against them. His idea was to drive them out of Europe instead of trying to defend fortresses and cities. The Serbian army numbered 50,000 –70,000 men. Despot Uglješa wanted to make a surprise attack on the Ottomans in their capital city, Edirne, while Murad I was in Asia Minor. The Ottoman army was much smaller, Byzantine Greek scholar Laonikos Chalkokondyles and different sources give the number of 800 up to 4,000 men, but due to superior tactics, by conducting a night raid on the Serbian camp, Şâhin Paşa was able to defeat the Serbian army and kill King Vukašin and despot Uglješa. Thousands of Serbs were killed, and thousands drowned in the Maritsa river when they tried to flee. After the battle, the Maritsa ran scarlet with blood.

Bulgarians become vassals to the Ottomans

Bulgaria
Christian-born Devşirme, would later serve in the elite Jannisary.

In 1373 Ivan Shishman, the Bulgarian Emperror was forced to negotiate a humiliating peace treaty: he became an Ottoman vassal strengthening the union with a marriage between Murad and Shishman's sister Kera Tamara. To compensate, the Ottomans returned some of the conquered lands, including Ihtiman and Samokov.
Source:Wikipedia Link
1380 Jun 1

By the mid-1380s Murad's attention once again focused on the Balkans. With his Bulgarian vassal Shishman preoccupied by a war with Wallachian Voievod Dan I of Wallachia (ca. 1383-86), in 1385 Murad took Sofia, the last remaining Bulgarian possession south of the Balkan Mountains, opening the way toward strategically located Niš, the northern terminus of the important Vardar-Morava highway. The Battle of Dubravnica was the first historical mention of any Ottoman movements into Prince Lazar's territory. The Serbian army emerged victorious, although details of the battle itself are scarce. After this battle the Turks didn't venture into Serbia until 1386, when their armies were routed near Pločnik.
Source:Wikipedia Link
1382 Jan 1

In the beginning of the 1380s, despite the peace of 1373, the Ottomans resumed their campaigns and besieged the important city of Sofia which controlled major communication routes to Serbia and Macedonia. A Bulgarian renegate managed to lure the city governor ban Yanuka out of the fortress to hunt and the Turks captured him. Leaderless, the Bulgarians surrendered.The city walls were destroyed and an Ottoman garrison was installed.
Source:Wikipedia Link
1385 Jan 1

After a 25-day-long siege the city fell to the Ottomans.

Murad captured Niš in 1386, perhaps forcing Lazar of Serbia to accept Ottoman vassalage soon afterward. While he pushed deeper into the north—central Balkans, Murad also had forces moving west along the ‘’Via Ingatia’’ into Macedonia, forcing vassal status on regional rulers who until that time had escaped that fate. One contingent reached the Albanian Adriatic coast in 1385. Another took and occupied Thessaloniki in 1387. The danger to the continued independence of the Balkan Christian states grew alarmingly apparent. When Anatolian affairs forced Murad to leave the Balkans in 1387, his Serbian and Bulgarian vassals attempted to sever their ties to him. Lazar formed a coalition with Tvrtko I of Bosnia and Stratsimir of Vidin. After he refused an Ottoman demand that he live up to his vassal obligations, troops were dispatched against him. Lazar and Tvrtko met the Turks and defeated them at Plocnik, west of Niš. The victory by his fellow Christian princes encouraged Shishman to shed Ottoman vassalage and reassert Bulgarian independence.
Source:Wikipedia Link
1388 Jan 1

In 1388 a 30,000 strong army commanded by Ali Pasha passed through the eastern Balkan Mountains and struck deep into Bulgaria's north. The Bulgarians were completely surprised and the invaders seized Ovech, Shumen, Madara and other towns. Due to the surprise campaign at first the towns and the castles were unable to organize proper defence but after the initial shock the Bulgarians took precautions. When the army of Ali Pasha besieged Varna, the defenders stiffly resisted and the Turks were forced to abandon the siege and march northwards. As a result of the campaign the Turks took most of eastern Bulgaria including several key towns.
Source:Wikipedia Link
1388 Aug 26

Murad returned from Anatolia in 1388 and launched a lightning campaign against the Bulgarian rulers Shishman and Sratsimir, who swiftly were forced into vassal submission. He then demanded that Lazar proclaim his vassalage and pay tribute. Confident because of the victory at Plocnik, the Serbian prince refused and turned to Tvrtko of Bosnia and Vuk Brankovic, his son-in-law and independent ruler of northern Macedonia and Kosovo, for aid against the certain Ottoman retaliatory offensive. The Battle of Bileća was fought in August 1388 between the forces of the Kingdom of Bosnia led by Grand Duke Vlatko Vuković, and the Ottoman Empire under the leadership of Lala Şahin Pasha. The Ottoman army broke into Hum, the kingdom's southern region. After days of looting, the invaders clashed with the defending force near the town of Bileća, north-east of Dubrovnik. The battle ended with an Ottoman defeat.
Source:Wikipedia Link
1389 Jun 15 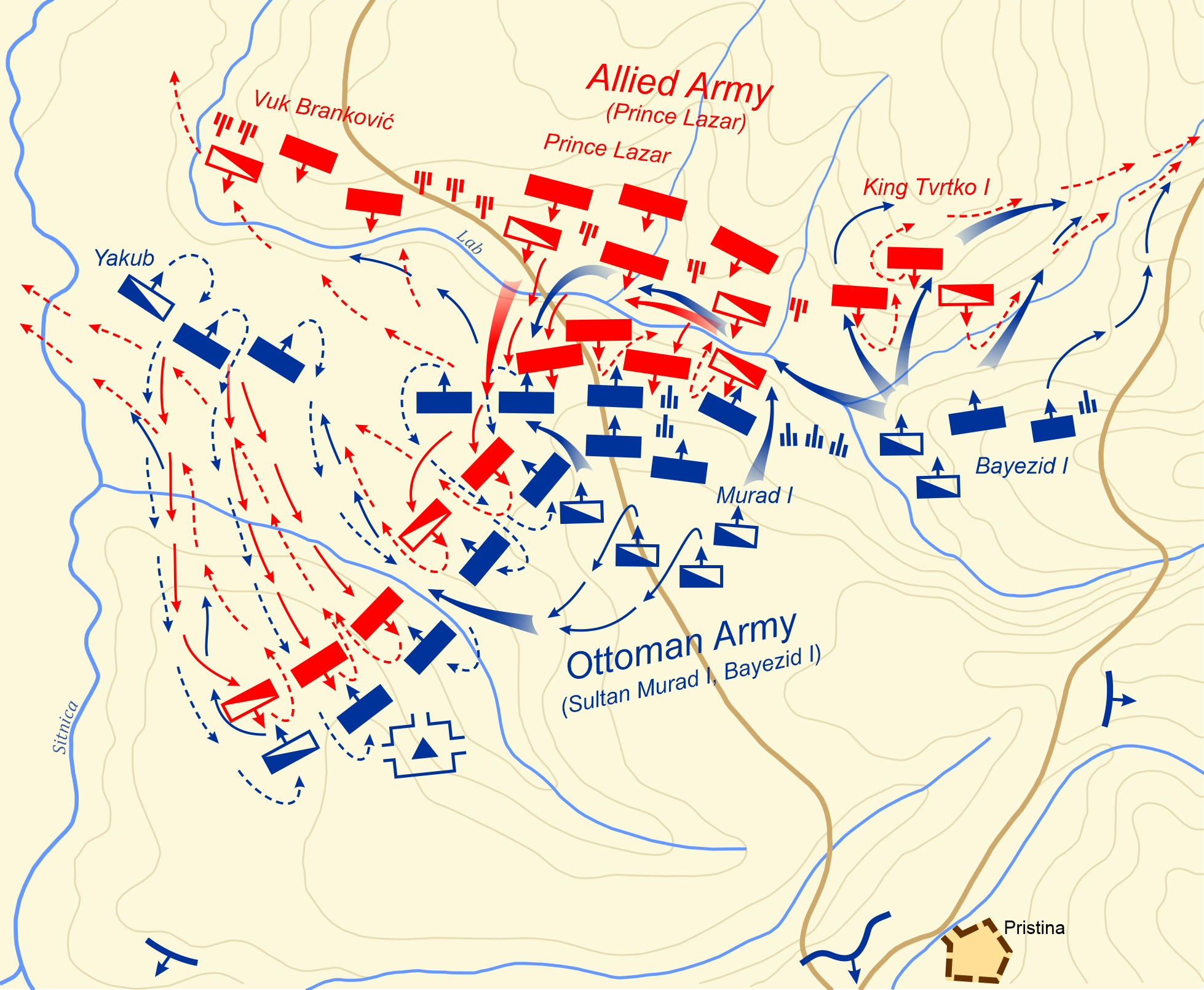 The Battle of Kosovo took place on 15 June 1389 between an army led by the Serbian Prince Lazar Hrebeljanović and an invading army of the Ottoman Empire under the command of Sultan Murad Hüdavendigâr. The army under Prince Lazar consisted of his own troops, a contingent led by Branković, and a contingent sent from Bosnia by King Tvrtko I, commanded by Vlatko Vuković. Prince Lazar was the ruler of Moravian Serbia and the most powerful among the Serbian regional lords of the time, while Branković ruled the District of Branković and other areas, recognizing Lazar as his overlord. There are different accounts from different sources about when and how Murad I was assassinated. The contemporary sources mainly noted that the battle took place and that both Prince Lazar and the Sultan lost their lives in the battle. One noteworthy detail of the battle is the first appearance of the Janissaries, who will feature in many more battles in the rise of the Ottoman Empire.

Murad established the sultanate by building up a society and government in the newly conquered city of Adrianople (Edirne in Turkish) and by expanding the realm in Europe, bringing most of the Balkans under Ottoman rule and forcing the Byzantine emperor to pay him tribute. It was Murad who established the former Osmanli tribe into an sultanate. He established the title of sultan in 1363 and the corps of the janissaries and the devşirme recruiting system. He also organised the government of the Divan, the system of timars and timar-holders (timariots) and the military judge, the kazasker. He also established the two provinces of Anadolu (Anatolia) and Rumeli (Europe).

Key Figures for Murad I

Book Recommenations for Murad I

How well do you know the History of the Ottoman Empire: Murad I?
Play Timelines