Harald to the Balkans

Back to Kievan Rus

Harald Sigurdsson, also known as Harald of Norway and given the epithet Hardrada in the sagas, was King of Norway from 1046 to 1066. In addition, he unsuccessfully claimed both the Danish throne until 1064 and the English throne in 1066.

Harald was born in Ringerike, Norway in 1015to Åsta Gudbrandsdatter and her second husband Sigurd Syr. Sigurd was a petty king of Ringerike, and among the strongest and wealthiest chieftains in the Uplands. Through his mother Åsta, Harald was the youngest of King Olaf II of Norway / Olaf Haraldsson's (later Saint Olaf) three half-brothers. In his youth, Harald displayed traits of a typical rebel with big ambitions, and admired Olaf as his role model. He thus differed from his two older brothers, who were more similar to their father, down-to-earth and mostly concerned with maintaining the farm.

Following a revolt in 1028, Harald's brother Olaf was forced into exile until he returned to Norway in early 1030. On hearing news of Olaf's planned return, Harald gathered 600 men from the Uplands to meet Olaf and his men upon their arrival in the east of Norway. After a friendly welcome, Olaf went on to gather an army and eventually fight in the Battle of Stiklestad on 29 July 1030, in which Harald took part on his brother's side. The battle was part of an attempt to restore Olaf to the Norwegian throne, which had been captured by the Danish king Cnut the Great (Canute). The battle resulted in defeat for the brothers at the hands of those Norwegians who were loyal to Cnut, and Olaf was killed while Harald was badly wounded. Harald was nonetheless remarked to have shown considerable military talent during the battle.
Source:Wikipedia Link
1031 Mar 1

After the defeat at the Battle of Stiklestad, Harald managed to escape with the aid of Rögnvald Brusason (later Earl of Orkney) to a remote farm in Eastern Norway. He stayed there for some time to heal his wounds, and thereafter (possibly up to a month later) journeyed north over the mountains to Sweden. A Year after the Battle of Stiklestad, Harald arrived in Kievan Rus' (referred to in the sagas as Garðaríki or Svíþjóð hin mikla). He likely spent at least part of his time in the town of Staraya Ladoga (Aldeigjuborg), arriving there in the first half of 1031. Harald and his men were welcomed by Grand Prince Yaroslav the Wise, whose wife Ingegerd was a distant relative of Harald. Badly in need of military leaders, Yaroslav recognised a military potential in Harald and made him a captain of his forces. Harald's brother Olaf Haraldsson had previously been in exile to Yaroslav following the revolt in 1028, and Morkinskinna says that Yaroslav embraced Harald first and foremost because he was the brother of Olaf. Harald took part in Yaroslav's campaign against the Poles in 1031, and possibly also fought against other 1030s Kievan enemies and rivals such as the Chudes in Estonia, the Byzantines, as well as the Pechenegs and other steppe nomad people.

After a few years in Kievan Rus', Harald and his force of around 500 men moved on south to Constantinople (Miklagard), the capital of the Eastern Roman Empire where they joined the Varangian Guard. While the Varangian Guard was primarily meant to function as the emperor's bodyguard, Harald was found fighting on "nearly every frontier" of the empire. He first saw action in campaigns against Arab pirates in the Mediterranean Sea, and then in inland towns in Asia Minor / Anatolia that had supported the pirates. By this time, he had according to Snorri Sturluson become the "leader over all the Varangians".

By 1035, the Byzantines had pushed the Arabs out of Asia Minor to the east and southeast, and Harald took part in campaigns that went as far east as the Tigris River and Euphrates River in Mesopotamia, where according to his skald (poet) Þjóðólfr Arnórsson (recounted in the sagas) he participated in the capture of eighty Arab strongholds, a number which historians Sigfus Blöndal and Benedikt Benedikz see no particular reason to question.

In 1038, Harald joined the Byzantines in their expedition to Sicily, in George Maniakes's (the sagas' "Gyrge") attempt to reconquer the island from the Muslim Saracens, who had established the Emirate of Sicily on the island. During the campaign, Harald fought alongside Norman mercenaries such as William Iron Arm.

In 1041, when the Byzantine expedition to Sicily was over, a Lombard-Norman revolt erupted in southern Italy, and Harald led the Varangian Guard in multiple battles. Harald fought with the Catepan of Italy, Michael Dokeianos with initial success, but the Normans, led by their former ally William Iron Arm, defeated the Byzantines in the Battle of Olivento in March, and in the Battle of Montemaggiore in May.

Harald to the Balkans

After the defeat, Harald and the Varangian Guard were called back to Constantinople, following Maniakes' imprisonment by the emperor and the onset of other more pressing issues. Harald and the Varangians were thereafter sent to fight in the southeastern European frontier as the Balkan peninsula in Bulgaria, where they arrived in late 1041. There, he fought in the army of Emperor Michael IV in the Battle of Ostrovo of the 1041 campaign against the Bulgarian uprising led by Peter Delyan, which later gained Harald the nickname the "Bulgar-burner" (Bolgara brennir) by his skald.

Harald's favour at the imperial court quickly declined after the death of Michael IV in December 1041, which was followed by conflicts between the new emperor Michael V and the powerful empress Zoe.

During the turmoil, Harald was arrested and imprisoned, but the sources disagree on the grounds. The sources also disagree on how Harald got out of prison, but he may have been helped by someone outside to escape in the midst of the revolt that had begun against the new emperor.

Harthacnut, King of England died. Although Harthacnut had promised the English throne to Harald’s nephew Magnus, Edward the Confessor, son of Aethelred the Unready, became King.

Back to Kievan Rus

After Zoe had been restored to the throne in June 1042 together with Constantine IX, Harald requested to be allowed to return to Norway. Although Zoe refused to allow this, Harald managed to escape into the Bosphorus with two ships and some loyal followers. During his second stay there, he married Elisabeth (referred to in Scandinavian sources as Ellisif), daughter of Yaroslav the Wise and granddaughter of the Swedish king Olof Skötkonung.
Source:Wikipedia Link
1045 Oct 1

Seeking to regain for himself the kingdom lost by his half-brother Olaf Haraldsson, Harald began his journey westwards and arrived in Sigtuna in Sweden, probably at the end of 1045

On his return to Norway, Hardrada reached an agreement with Magnus I that they would share the rule of Norway. On 1047, King Magnus died and Harald became sole ruler of Norway.

Harald also wanted to re-establish Magnus's rule over Denmark. Similar to his campaigns (then together with Sweyn) against Magnus's rule in Denmark, most of his campaigns against Sweyn consisted of swift and violent raids on the Danish coasts. Although Harald was victorious in most of the engagements, he was never successful in occupying Denmark.

As Harald had not been able to conquer Denmark despite his raids, he wanted to win a decisive victory over Sweyn. He eventually set out from Norway with a great army and a fleet of around 300 ships. Sweyn had also prepared for the battle, which had been preassigned a time and place. Sweyn, did not appear at the agreed time, and Harald thus sent home his non-professional soldiers (bóndaherrin), which had made up half of his forces. When the dismissed ships were out of reach, Sweyn's fleet finally appeared, possibly also with 300 ships. The battle resulted in great bloodshed as Harald defeated the Danes (70 Danish ships were reportedly left "empty"), but many ships and men managed to escape, including Sweyn. During the battle, Harald actively shot with his bow, like most others in the early phase of the battle.

Harald claims the English throne and decides to invade England. In March or April 1066, Harald began assembling his fleet at Solund, in the Sognefjord, a process completed by the start of September 1066; it included his flagship, Ormen, or "Serpent".
Source:Wikipedia Link
1066 Sep 8

Harald Hardrada and Tostig Godwinson invaded the north of England bringing around 10–15,000 men, on 240–300 longships. He met Tostig and his 12 ships at Tynemouth. After embarking from Tynemouth, Harald and Tostig probably landed at the River Tees. They then entered Cleveland, and started plundering the coast. They sailed through the Humber estuary and up the River Ouse disembarking at Riccall.

News of the invasion soon reached the earls Morcar of Northumbria and Edwin of Mercia, and they fought against Harald's invading army two miles (3 km) south of York at the Battle of Fulford on 20 September. The battle was a decisive victory for Harald and Tostig, and led York to surrender to their forces on 24 September.

Harald and Tostig departed their landing place at Riccall with most of their forces, but left a third of their forces behind. They brought only light armour, as they expected to just meet the citizens of York. Although (according to non-saga sources) the English forces were held up at the bridge for some time by a single gigantic Norwegian, allowing Harald and Tostig to regroup into a shield-wall formation, Harald's army was in the end heavily beaten. Harald was struck in the throat by an arrow and killed early in the battle in a state of berserkergang, having worn no body armour and fought aggressively with both hands around his sword. 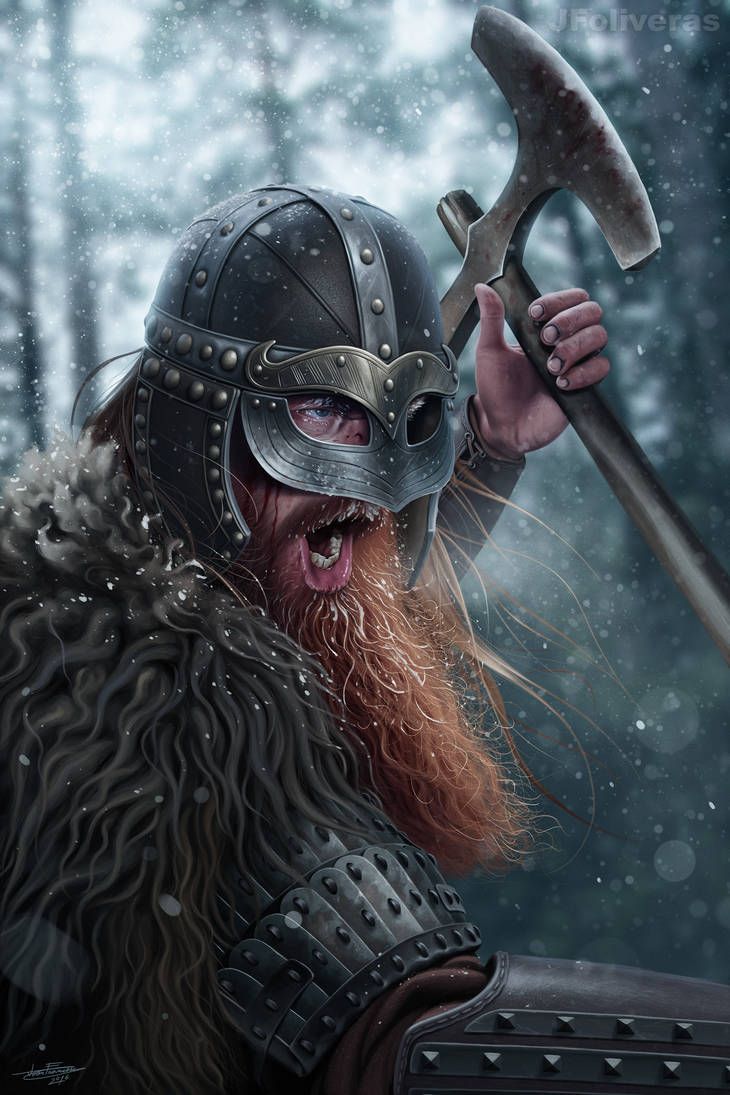 How well do you know the Harald Hardrada?
Play Timelines