The Battle of Hastings was fought on 14 October 1066 between the Norman-French army of William, the Duke of Normandy, and an English army under the Anglo-Saxon King Harold Godwinson, beginning the Norman conquest of England.

In 911, the Carolingian ruler Charles the Simple allowed a group of Vikings to settle in Normandy under their leader Rollo. Their settlement proved successful, and they quickly adapted to the indigenous culture, renouncing paganism, converting to Christianity, and intermarrying with the local population. Over time, the frontiers of the duchy expanded to the west. In 1002, King Æthelred II married Emma, the sister of Richard II, Duke of Normandy. Their son Edward the Confessor spent many years in exile in Normandy, and succeeded to the English throne in 1042. This led to the establishment of a powerful Norman interest in English politics, as Edward drew heavily on his former hosts for support, bringing in Norman courtiers, soldiers, and clerics and appointing them to positions of power, particularly in the Church. Edward was childless and embroiled in conflict with the formidable Godwin, Earl of Wessex, and his sons, and he may also have encouraged Duke William of Normandy's ambitions for the English throne.

In 1002, King Æthelred II married Emma, the sister of Richard II, Duke of Normandy. Their son Edward the Confessor spent many years in exile in Normandy, and succeeded to the English throne in 1042. This led to the establishment of a powerful Norman interest in English politics, as Edward drew heavily on his former hosts for support, bringing in Norman courtiers, soldiers, and clerics and appointing them to positions of power, particularly in the Church. Edward was childless and embroiled in conflict with the formidable Godwin, Earl of Wessex, and his sons, and he may also have encouraged Duke William of Normandy's ambitions for the English throne. Edward probably entrusted the kingdom to Harold shortly before he died on 5 January 1066. On 6 January he was buried in Westminster Abbey, and Harold was crowned on the same day.
1066 Jan 19

Duke William assembled a large invasion fleet and an army gathered from Normandy and the rest of France, including large contingents from Brittany and Flanders. He spent almost nine months on his preparations, as he had to construct a fleet from nothing.

In early 1066, Harold's exiled brother Tostig Godwinson raided southeastern England with a fleet he had recruited in Flanders, later joined by other ships from Orkney. Threatened by Harold's fleet, Tostig moved north and raided in East Anglia and Lincolnshire. He was driven back to his ships by the brothers Edwin, Earl of Mercia and Morcar, Earl of Northumbria. Deserted by most of his followers, he withdrew to Scotland, where he spent the middle of the Year recruiting fresh forces.
Source:Wikipedia Link
1066 Jun 1

Throughout the summer, William assembled an army and an invasion fleet in Normandy. Although William of Jumièges's claim that the ducal fleet numbered 3,000 ships is clearly an exaggeration, it was probably large and mostly built from scratch. Although William of Poitiers and William of Jumièges disagree about where the fleet was built – Poitiers states it was constructed at the mouth of the River Dives, while Jumièges states it was built at Saint-Valery-sur-Somme – both agree that it eventually sailed from Valery-sur-Somme. The fleet carried an invasion force that included, in addition to troops from William's own territories of Normandy and Maine, large numbers of mercenaries, allies, and volunteers from Brittany, northeastern France, and Flanders, together with smaller numbers from other parts of Europe. Although the army and fleet were ready by early August, adverse winds kept the ships in Normandy until late September. There were probably other reasons for William's delay, including intelligence reports from England revealing that Harold's forces were deployed along the coast. William would have preferred to delay the invasion until he could make an unopposed landing.

Harold had spent mid-1066 on the south coast with a large army and fleet waiting for William to invade.

Accepting he could not conquer Denmark, Harald Hardrada switched attention to England; his claim was based on a 1038 agreement between Magnus and its previous ruler, Harthacnut, who died childless in 1042. This stated if either died, the other would inherit their lands. Hardrada invaded northern England in early September, leading a fleet of more than 300 ships carrying perhaps 15,000 men. Hardrada's army was further augmented by the forces of Tostig, who supported the Norwegian king's bid for the throne.

Harold kept his forces on alert throughout the summer, but with the arrival of the harvest season he disbanded his army on 8 September.

The Battle of Fulford was fought on the outskirts of the village of Fulford near York in England, on 20 September 1066, when King Harald III of Norway, also known as Harald Hardrada ("harðráði" in Old Norse, meaning "hard ruler"), and Tostig Godwinson, his English ally, fought and defeated the Northern Earls Edwin and Morcar. The Norwegians occupied the York afterwards.

Learning of the Norwegian invasion, King Harold rushed north, gathering forces as he went, and took the Norwegians by surprise, defeating them at the Battle of Stamford Bridge on 25 September. Harald Hardrada and Tostig were killed, and the Norwegians suffered such great losses that only 24 of the original 300 ships were required to carry away the survivors. The English victory came at great cost, as Harold's army was left in a battered and weakened state, and far from the south

Before dawn on 28 September, William of Normandy sailed his invading fleet of about 700 ships at Pevensey on the Sussex coast.There were no defenders at Pevensey and the bay provided a safe haven for the invading fleet. A few ships were blown off course and landed at Romney, where the Normans fought the local fyrd. After landing, William's forces built a wooden castle at Hastings, from which they raided the surrounding area. He cut a ditch across the peninsula to isolate the ruins from the mainland and repaired the walls to create a castle. More fortifications were erected at Pevensey.

After defeating his brother Tostig and Harald Hardrada in the north, Harold left much of his forces in the north, including Morcar and Edwin, and marched the rest of his army south to deal with the threatened Norman invasion. 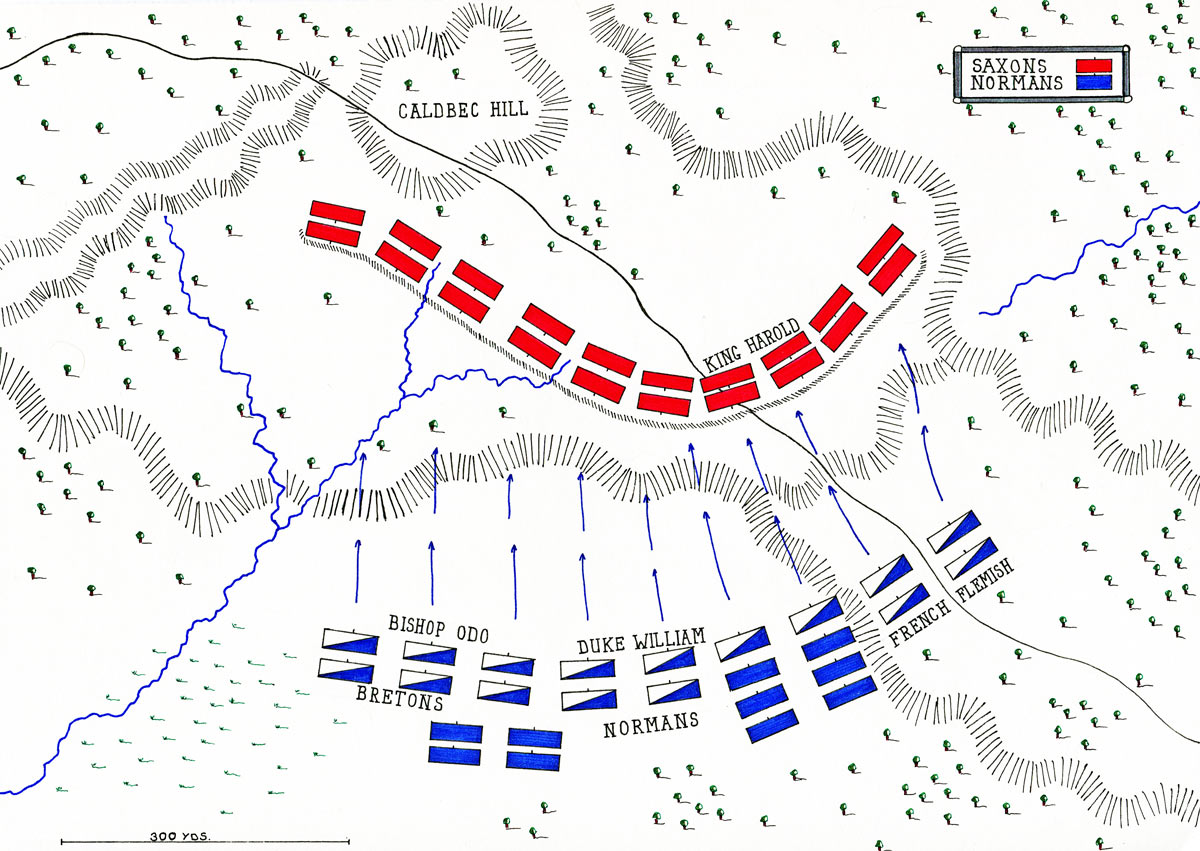 Harold stopped in London, and was there for about a week before Hastings, so it is likely that he spent about a week on his march south, averaging about 27 mi (43 km) per day, for the approximately 200 mi (320 km).

The exact numbers present at the battle are unknown as even modern estimates vary considerably. The composition of the forces is clearer: the English army was composed almost entirely of infantry and had few archers, whereas only about half of the invading force was infantry, the rest split equally between cavalry and archers. Harold appears to have tried to surprise William, but scouts found his army and reported its arrival to William, who marched from Hastings to the battlefield to confront Harold. The battle lasted from about 9 am to dusk. Early efforts of the invaders to break the English battle lines had little effect. Therefore, the Normans adopted the tactic of pretending to flee in panic and then turning on their pursuers. Harold's death, probably near the end of the battle, led to the retreat and defeat of most of his army.

After further military efforts, William was crowned king on Christmas day, 1066, in London. He made arrangements for the governance of England in early 1067 before returning to Normandy. Several unsuccessful rebellions followed, but William's hold was mostly secure on England by 1075, allowing him to spend the majority of his reign in continental Europe.

Despite the submission of the English nobles, resistance continued for several years. There were rebellions in Exeter in late 1067, an invasion by Harold's sons in mid-1068, and an uprising in Northumbria in 1068. In 1069 William faced more troubles from Northumbrian rebels, an invading Danish fleet, and rebellions in the south and west of England. He ruthlessly put down the various risings, culminating in the Harrying of the North in late 1069 and early 1070 that devastated parts of northern England. A further rebellion in 1070 by Hereward the Wake was also defeated by the king, at Ely.

Key Figures for Battle of Hastings

Book Recommenations for Battle of Hastings 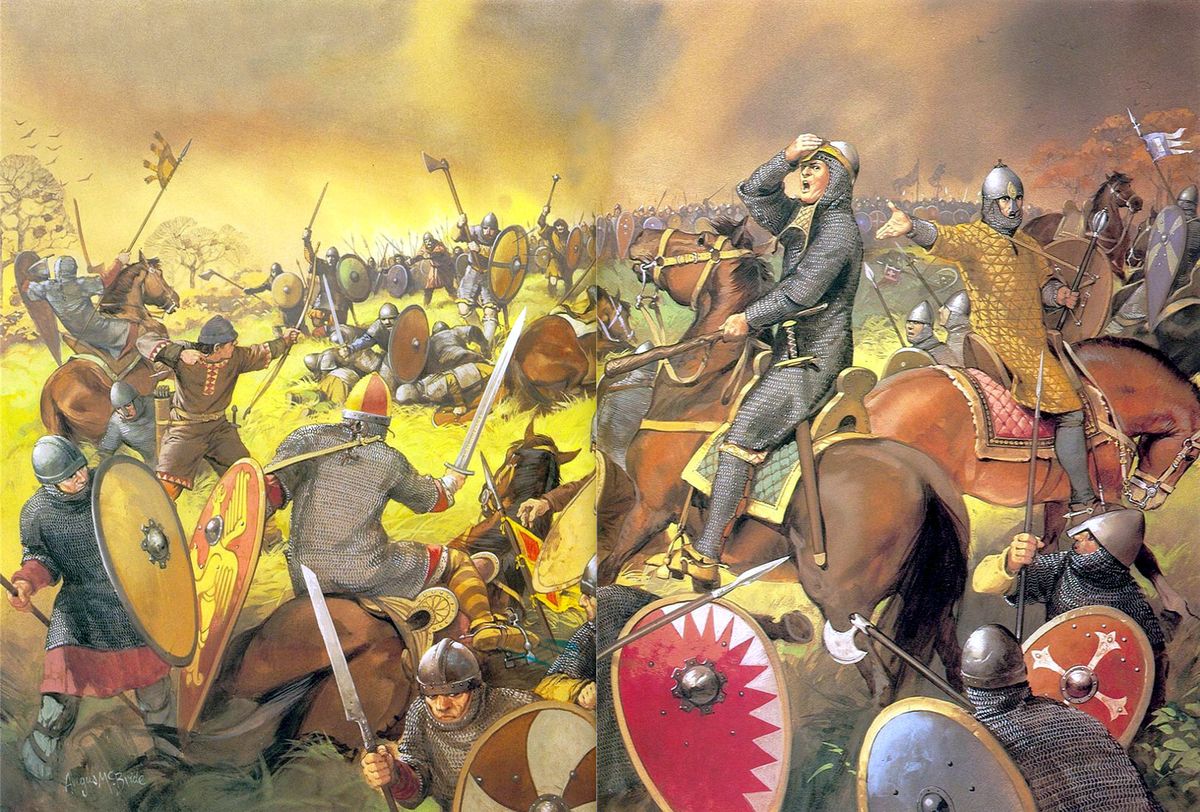 How well do you know the Battle of Hastings?
Play Timelines