Reign of Taejo of Joseon

Joseon was the last dynastic kingdom of Korea, lasting just over 500 years. It was founded by Yi Seong-gye in July 1392 and replaced by the Korean Empire in October 1897. The kingdom was founded following the aftermath of the overthrow of Goryeo in what is today the city of Kaesong. Early on, Korea was retitled and the capital was relocated to modern-day Seoul. The kingdom's northernmost borders were expanded to the natural boundaries at the rivers of Amrok and Tuman through the subjugation of the Jurchens.

During its 500-year duration, Joseon encouraged the entrenchment of Confucian ideals and doctrines in Korean society. Neo-Confucianism was installed as the new state's ideology. Buddhism was accordingly discouraged, and occasionally the practitioners faced persecutions. Joseon consolidated its effective rule over the territory of current Korea and saw the height of classical Korean culture, trade, literature, and science and technology. In the 1590s, the kingdom was severely weakened due to Japanese invasions. Several decades later, Joseon was invaded by the Later Jin dynasty and the Qing dynasty in 1627 and 1636–1637 respectively, leading to an increasingly harsh isolationist policy, for which the country became known as the "hermit kingdom" in Western literature. After the end of these invasions from Manchuria, Joseon experienced a nearly 200-year period of peace and prosperity, along with cultural and technological development. What power the kingdom recovered during its isolation waned as the 18th century came to a close. Faced with internal strife, power struggles, international pressure, and rebellions at home, the kingdom declined rapidly in the late 19th century.

By the late 14th century, the nearly 500-year-old Goryeo established in 918 was tottering, its foundations collapsing from years of war spilled over from the disintegrating Yuan dynasty. Following the emergence of the Ming dynasty, the royal court in Goryeo split into two conflicting factions, one supporting the Ming and the other standing by the Yuan. In 1388, a Ming messenger came to Goryeo to demand that territories of the former Ssangseong Prefectures be handed over to Ming China. The tract of land was taken by Mongol forces during the invasion of Korea, but had been reclaimed by Goryeo in 1356 as the Yuan dynasty weakened. The act caused an uproar among the Goryeo court, and General Choe Yeong seized the chance to argue for an invasion of the Ming-controlled Liaodong Peninsula.

General Yi Seong-gye was chosen to lead the attack; he revolted, swept back to the capital Gaegyeong (present-day Kaesong) and initiated a coup d'état, overthrowing King U in favor of his son, Chang of Goryeo (1388). He later killed King U and his son after a failed restoration and forcibly placed a royal named Wang Yo on the throne (he became King Gongyang of Goryeo). In 1392, Yi eliminated Jeong Mong-ju, highly respected leader of a group loyal to Goryeo dynasty, and dethroned King Gongyang, exiling him to Wonju, and he ascended the throne himself. The Goryeo kingdom had come to an end after 474 years of rule.

In the beginning of his reign, Yi Seong-gye, now ruler of Korea, intended to continue to use of the name Goryeo for the country he ruled and simply change the royal line of descent to his own, thus maintaining the façade of continuing the 500-year-old Goryeo tradition. After numerous threats of mutiny from the drastically weakened but still influential Gwonmun nobles, who continued to swear allegiance to the remnants of the Goryeo and to the now-demoted Wang clan, the consensus in the reformed court was that a new dynastic title was needed to signify the change. In naming the new kingdom, Taejo contemplated two possibilities – "Hwaryeong" (his place of birth) and "Joseon". After much internal deliberation, as well as endorsement by the neighboring Ming dynasty's emperor, Taejo declared the name of the kingdom to be Joseon, a tribute to the ancient Korean state of Gojoseon.

Reign of Taejo of Joseon

Taejo of Joseon was the founder and the first king of the Joseon dynasty of Korea. After ascension to the throne, he changed his name to 李旦 . He reigned from 1392 to 1398, and was the main figure in the overthrowing of the Goryeo Dynasty.

An early achievement of the new monarch was improved relations with Ming China; this had its origin in General Yi's refusal to attack their neighbour in response to raids from Chinese bandits. Shortly after his accession, the king sent envoys to inform the Ming court at Nanjing that a dynastic change had taken place. Korean envoys were dispatched to Japan, seeking the re-establishment of amicable relations. The mission was successful, and Shōgun Ashikaga Yoshimitsu was reported to have been favorably impressed by this initial embassy. Envoys from the Ryūkyū Kingdom were received in 1392, 1394 and 1397. Siam sent an envoy in 1393.

Taejo abdicated in 1398 during a strife between his sons and died in 1408.

In naming the new dynasty, Taejo contemplated two possibilities - "Hwaryeong" and "Joseon". After much internal deliberation, as well as endorsement by the neighboring Ming dynasty's emperor, Taejo declared the name of the kingdom to be Joseon, a tribute to the ancient Korean state of Gojoseon. He also moved the capital to Hanyang from Kaesong.

The founder of the dynasty, Taejong made several attempts to bring upon improvements in the prevailing monetary system but they were not a success initially. The attempts include issuing Korean paper currency and issuing coins instead of importing them from China. The coins issued in Korean being unsuccessful led to the issuance of a standardized note made of black mulberry bark called Jeohwa (저화/楮貨), that was used in place of coins. Bronze coins were not cast again until the Year 1423 during the reign of King Sejong. These coins had the inscription 朝鮮通寶 (Chosun Tongbo "Chosun currency"). The coins that were minted in the 17th century came out to be a success at last and as a result, 24 mints were established throughout Korea. Coinage formed a major part of the exchange system after this time.

The Korean alphabet, known as Hangul (Hangeul) in South Korea and Chosŏn'gŭl in North Korea, is a writing system for the Korean language created by King Sejong the Great in 1443. The letters for the five basic consonants reflect the shape of the speech organs used to pronounce them, and they are systematically modified to indicate phonetic features; similarly, the vowel letters are systematically modified for related sounds, making Hangul a featural writing system. 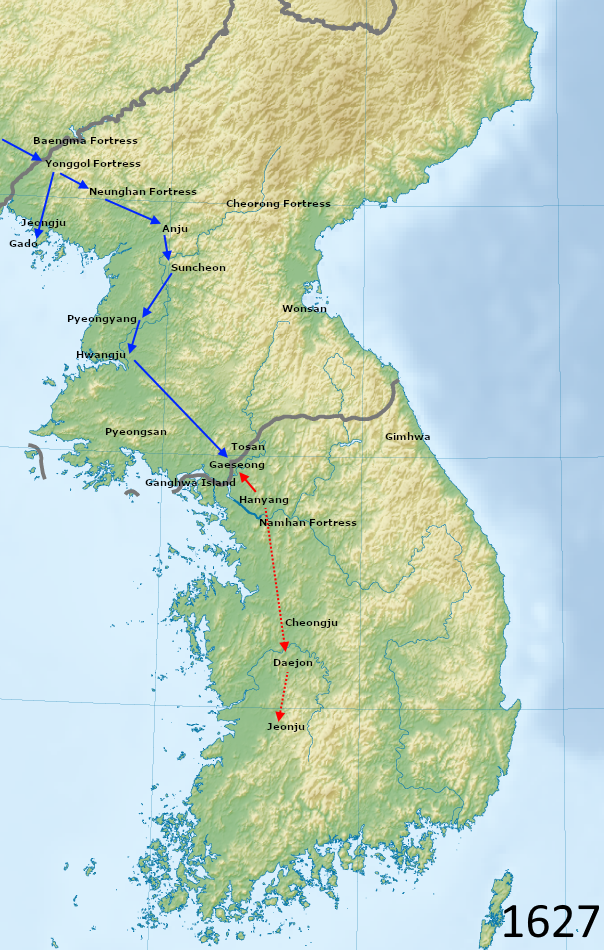 The Qing invasion of Joseon occurred in the winter of 1636 when the newly established Manchu-led Qing dynasty invaded the Joseon dynasty, establishing its status as the center of the Imperial Chinese Tributary System and formally severing Joseon's relationship with the Ming dynasty. The invasion was preceded by the Later Jin invasion of Joseon in 1627.

The French expedition to Korea was an 1866 punitive expedition undertaken by the Second French Empire in retaliation for the earlier Korean execution of seven French Catholic missionaries. The encounter over Ganghwa Island lasted nearly six weeks. The result was an eventual French retreat, and a check on French influence in the region. The encounter also confirmed Korea in its isolationism for another decade, until Japan forced it to open up to trade in 1876 through the Treaty of Ganghwa.

The United States expedition to Korea, known by the Koreans as the Shinmiyangyo (신미양요: 辛未洋擾, lit. "Western Disturbance in the Shinmi (1871) Year") or simply the Korean Expedition, in 1871, was the first American military action in Korea. On 10 June, about 650 Americans landed and captured several forts, killing over 200 Korean troops with a loss of only three American soldiers dead. Korea continued to refuse to negotiate with the United States until 1882.

The First Sino-Japanese War (25 July 1894 – 17 April 1895) was a conflict between the Qing dynasty of China and the Empire of Japan primarily over influence in Joseon Korea. After more than six months of unbroken successes by Japanese land and naval forces and the loss of the port of Weihaiwei, the Qing government sued for peace in February 1895.

The Korean Empire was an independent unified Korean state proclaimed in October 1897 by Emperor Gojong of the Joseon Dynasty. The empire stood until Japan's annexation of Korea in August 1910. During the Korean Empire, Emperor Gojong oversaw the Gwangmu Reform, a partial modernization and westernization of Korea's military, economy, land system, and education system, and of various industries. In 1905 Korea became a colonial protectorate of Japan; in 1910 Japan annexed Korea outright.

The Joseon period has left a substantial legacy to modern Korea; much of modern Korean culture, etiquette, norms, and societal attitudes toward current issues, along with the modern Korean language and its dialects, derive from the culture and traditions of Joseon. Modern Korean bureaucracy and administrative divisions were also established during the Joseon period.

How well do you know the Joseon Dynasty?
Play Timelines