The Mongol invasions of Korea (1231–1259) comprised a series of campaigns between 1231 and 1270 by the Mongol Empire against the Kingdom of Goryeo (the proto-state of modern-day Korea). There were seven major campaigns at tremendous cost to civilian lives throughout the Korean Peninsula, the last campaign would finally had successfully made Korea becoming a vassal state of the Mongol Yuan dynasty for approximately 80 years. The Yuan would exact wealth and tributes from the Goryeo Kings. Despite submission to Yuan, internal struggles in the Goryeo royalty and rebellions against Yuan rule would continue, the most famous was the Sambyeolcho Rebellion. In 1350s, Goryeo began attacking the Yuan Dynasty's Mongolian garrisons, regaining back former Korean territories. The remaining Mongols were either captured or retreated back to Mongolia.﻿

The Mongol Empire launched several invasions against Korea under Goryeo from 1231 to 1259. There were six major campaigns: 1231, 1232, 1235, 1238, 1247, 1253; between 1253 and 1258, the Mongols under Möngke Khan's general Jalairtai Qorchi launched four devastating invasions in the final successful campaign against Korea, at tremendous cost to civilian lives throughout the Korean Peninsula. The Mongols annexed the northern areas of Korean Peninsula after the invasions and incorporated them into their empire as Ssangseong Prefectures and Dongnyeong Prefectures.

Fleeing from the Mongols, in 1216 the Khitans invaded Goryeo and defeated the Korean armies multiple times, even reaching the gates of the capital and raiding deep into the south, but were defeated by Korean General Kim Chwi-ryeo who pushed them back north to Pyongang, where the remaining Khitans were finished off by allied Mongol-Goryeo forces in 1219. These Khitans are possibly the origin of the Baekjeong.
Source:Wikipedia Link
1231 Jan 1 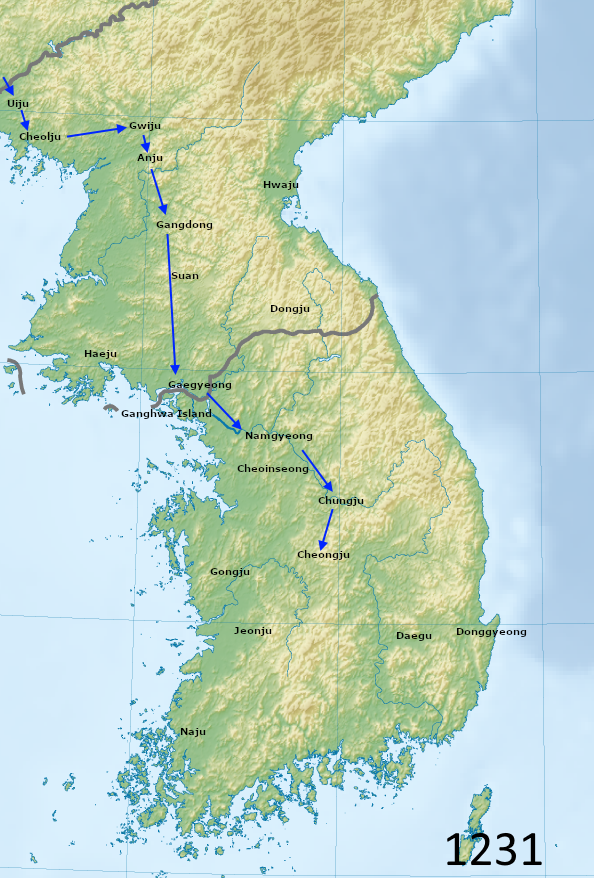 In 1224, a Mongol envoy was killed in obscure circumstances and Korea stopped paying tribute. Ögedei dispatched General Saritai to subdue Korea and avenge the dead envoy in 1231. The Mongol army crossed the Yalu river and quickly secured the surrender of the border town of Uiju.

Choe Woo mobilized as many soldiers as possible into an army consisting largely of infantry, where it fought the Mongols at both Anju and Kuju (modern-day Kusong). The Mongols took Anju.
Source:Wikipedia Link
1231 Sep 1 - 1232 Jan 1

To take Kuju, Saritai used a full array of siege weapons to bring down the city's defenses. Lines of catapults launched both boulders and molten metals at the city's walls. The Mongols deployed special assault teams who manned siege towers and scaling ladders. Other tactics used were pushing flaming carts against the city's wooden gates and tunneling under the walls. The most grisly weapon used during the siege were fire-bombs which contained boiled down, liquefied human fat. Despite the fact the Goryeo army was heavily outnumbered and after over thirty days of brutal siege warfare, Goryeo soldiers still refused to surrender and with mounting Mongol casualties, the Mongol army could not take the city and had to withdraw.

Frustrated by siege warfare, Saritai instead used his armies' superior mobility to bypass the Goryeo army and succeeded in taking the capital at Gaesong. Elements of the Mongol army reached as far as Chungju in the central Korean peninsula; however, their advance was halted by a slave army led by Ji Gwang-su where his army fought to the death. Realizing that with the fall of the capital Goryeo was unable to resist the Mongol invaders, Goryeo sued for peace.
1232 Apr 1

General Saritai began withdrawing his main force to the north in the spring of 1232, leaving seventy-two Mongol administrative officials stationed in various cities in northwestern Goryeo to ensure that Goryeo kept his peace terms.
1232 Jun 1

In 1232, Choe Woo, against the pleas of both King Gojong and many of his senior civil officials, ordered the Royal Court and most of Gaesong's population to be moved from Songdo to Ganghwa Island in the Bay of Gyeonggi, and started the construction of significant defenses to prepare for the Mongol threat. Choe Woo exploited the Mongols' primary weakness, fear of the sea. The government commandeered every available ship and barge to transport supplies and soldiers to Ganghwa Island. The government further ordered the common people to flee the countryside and take shelter in major cities, mountain citadels, or nearby offshore islands. Ganghwa Island itself was a strong defensive fortress. Smaller fortresses were built on the mainland side of the island and a double wall was also built across the ridges of Mt. Munsusan.

The Mongols protested the move and immediately launched a second attack. The Mongol army was led by a traitor from Pyongyang called Hong Bok-won and the Mongols occupied much of northern Korea. Although they reached parts of the southern peninsula as well, the Mongols failed to capture Ganghwa Island, which was only a few miles from shore, and were repelled in Gwangju. The Mongol general there, Saritai (撒禮塔), was killed by the monk Kim Yun-hu (김윤후) amidst strong civilian resistance at the Battle of Cheoin near Yongin, forcing the Mongols to withdraw again.

In 1235, the Mongols began a campaign that ravaged parts of Gyeongsang and Jeolla Provinces. Civilian resistance was strong, and the Royal Court at Ganghwa attempted to strengthen its fortress. Goryeo won several victories but the Goryeo military and Righteous armies could not withstand the waves of invasions. After the Mongols were unable to take either Ganghwa Island or Goryeo's mainland mountain castles, the Mongols began to burn Goryeo farmland in an attempt to starve the populace. When some fortresses finally surrendered, the Mongols executed everyone who resisted them.

Goryeo relented and sued for peace. The Mongols withdrew, in exchange for Goryeo's agreement to send the Royal Family as hostages. However, Goryeo sent an unrelated member of the Royal line. Incensed, the Mongols demanded to clear the seas of Korean ships, relocate the court to the mainland, the hand-over of anti-Mongol bureaucrats, and, again, the Royal family as hostages. In response, Korea sent a distant princess and ten children of nobles.
1247 Jul 1

The Mongols began the fourth campaign against Goryeo, again demanding the return of the capital to Songdo and the Royal Family as hostages. Güyük sent Amuqan to Korea and the Mongols camped near Yomju in July 1247. After the king Gojong of Goryeo refused to move his capital from Ganghwa island to Songdo, Amuqan's force pillaged the Korean Peninsula. With the death of Güyük Khan in 1248, however, the Mongols withdrew again. But the Mongol raids continued until 1250. 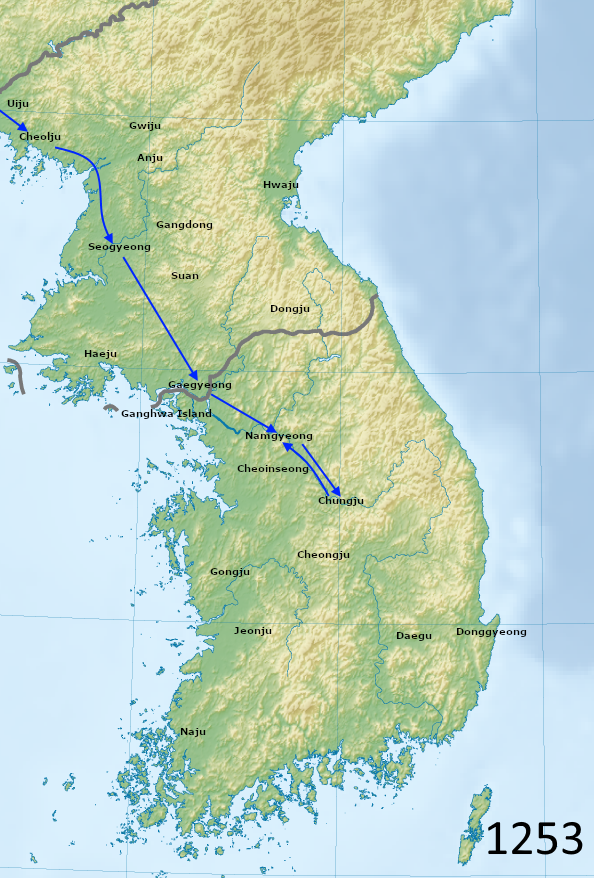 Upon the 1251 ascension of Möngke Khan, the Mongols again repeated their demands. Möngke Khan sent envoys to Goryeo, announcing his coronation in October 1251. He also demanded the King Gojong be summoned before him in person and his headquarters be moved from Ganghwa Island to the Korean mainland. But the Goryeo court refused to send the king because the old king was unable to travel so far. Möngke again dispatched his envoys with specific tasks. Möngke ordered the Prince Yeku to command the army against Korea. Yeku, along with Amuqan, demanded the Goryeo court to surrender. The court refused but did not resist the Mongols and gathered the peasantry into the mountain fortresses and islands. Working together with the Goryeo commanders who had joined the Mongols, Jalairtai Qorchi ravaged Korea. When one of Yeku's envoys arrived, Gojong personally met him at his new palace in Sin Chuan-bug. Gojong finally agreed to move the capital back to the mainland, and sent his stepson Angyeong as a hostage. The Mongols agreed to a cease fire in January 1254.

Between 1253 and 1258, the Mongols under Jalairtai launched four devastating invasions in the final successful campaign against Korea. Möngke realized that the hostage was not the blood prince of the Goryeo Dynasty. So Möngke blamed the Goryeo court for deceiving him and killing the family of Lee Hyeong, who was a pro-Mongol Korean general. Möngke' commander Jalairtai devastated much of Goryeo and took 206,800 captives in 1254. Famine and despair forced peasants to surrender to the Mongols. They established a chiliarchy office at Yonghung with local officials. Ordering defectors to build ships, the Mongols began attacking the coastal islands from 1255 onward. In the Liaodong Peninsula, the Mongols eventually massed Korean defectors into a colony of 5,000 households. In 1258, Goryeo's King Gojong and one of the retainers of the Choe clan, Kim Injoon, staged a counter-coup and assassinated the head of the Choe family, ending the rule of the Choe family which spanned six decades. Afterwards, the king sued for peace with the Mongols. When the Goryeo court sent the future king Wonjong as hostage to the Mongol court and promised to return to Kaegyong, the Mongols withdrew from Central Korea.

Much of Goryeo was devastated after the decades of fighting. It was said that no wooden structures remained afterward in Goryeo. There was cultural destruction, and the nine-floor-tower of Hwangnyongsa and the first Tripitaka Koreana were destroyed. After seeing the Goryeo crown prince come to concede, Kublai Khan was jubilant and said "Goryeo is a country that long ago even Tang Taizong personally campaigned against but was unable to defeat, but now the crown prince comes to me, it is the will of heaven!" Part of Jeju Island converted to a grazing area for the Mongol cavalry stationed there. The Goryeo dynasty survived under influence of the Mongol Yuan Dynasty until it began to force Mongolian garrisons back starting in the 1350s, when the Yuan Dynasty was already beginning to crumble, suffering from massive rebellions in China. Taking advantage of the opportunity, the Goryeo king Gongmin also managed to regain some northern territories. 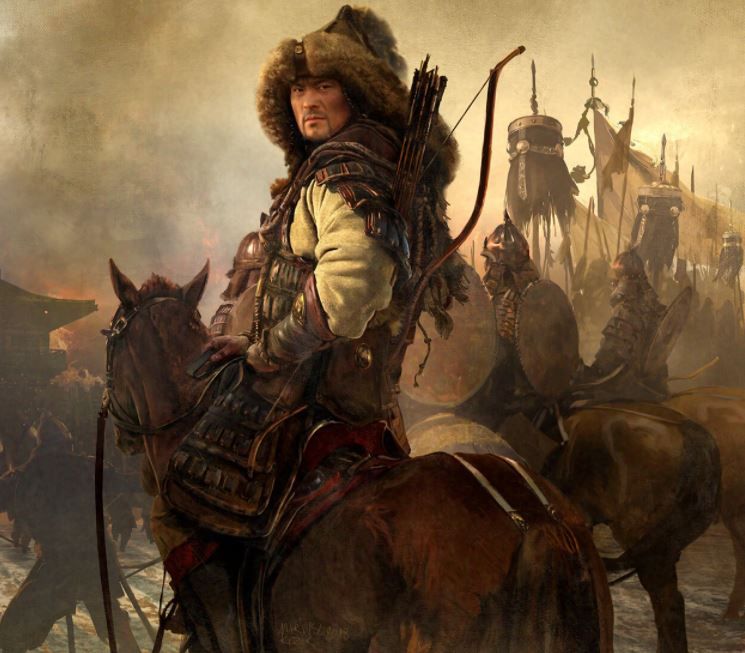 How well do you know the Mongol Invasions of Korea?
Play Timelines