King Charles I finances the voyage

The Magellan expedition, also known as the Magellan–Elcano expedition, was the first voyage around the world. It was a 16th century Spanish expedition initially led by Portuguese explorer Ferdinand Magellan to the Moluccas, which departed from Spain in 1519, and completed in 1522 by Spanish navigator Juan Sebastián Elcano, after crossing the Atlantic, Pacific and Indian oceans, culminating in the first circumnavigation of the world.

The expedition accomplished its primary goal – to find a western route to the Moluccas (Spice Islands). The fleet left Spain on 20 September 1519, sailed across the Atlantic ocean and down the eastern coast of South America, eventually discovering the Strait of Magellan, allowing them to pass through to the Pacific Ocean (which Magellan named). The fleet completed the first Pacific crossing, stopping in the Philippines, and eventually reached the Moluccas after two years. A much-depleted crew led by Juan Sebastián Elcano finally returned to Spain on 6 September 1522, having sailed west across the great Indian Ocean, then around the Cape of Good Hope through waters controlled by the Portuguese and north along the Western African coast to eventually arrive in Spain.

The fleet initially consisted of five ships and about 270 men. The expedition faced numerous hardships including Portuguese sabotage attempts, mutinies, starvation, scurvy, storms, and hostile encounters with indigenous people. Only 30 men and one ship (the Victoria) completed the return trip to Spain. Magellan himself died in battle in the Philippines, and was succeeded as captain-general by a series of officers, with Elcano eventually leading the Victoria's return trip.

The expedition was funded mostly by King Charles I of Spain, with the hope that it would discover a profitable western route to the Moluccas, as the eastern route was controlled by Portugal under the Treaty of Tordesillas. Though the expedition did find a route, it was much longer and more arduous than expected, and was therefore not commercially useful. Nevertheless, the expedition is regarded as one of the greatest achievements in seamanship, and had a significant impact on the European understanding of the world.

Goa, India
A battle between the Portuguese Armada and Turkish soldiers on horseback in Goa, western India

In March 1505 at the age of 25, Magellan enlisted in the fleet of 22 ships sent to host Francisco de Almeida as the first viceroy of Portuguese India. Although his name does not appear in the chronicles, it is known that he remained there eight years, in Goa, Cochin and Quilon. He participated in several battles, including the battle of Cannanore in 1506, where he was wounded. In 1509 he fought in the battle of Diu.

King Charles I finances the voyage

Seville, Spain
Charles I, the young King of Spain

After having his proposed expeditions to the Spice Islands repeatedly rejected by King Manuel of Portugal, Magellan turned to Charles I, the young King of Spain (and future Holy Roman Emperor). Under the 1494 Treaty of Tordesillas, Portugal controlled the eastern routes to Asia that went around Africa. Magellan instead proposed reaching the Spice Islands by a western route, a feat which had never been accomplished. Hoping that this would yield a commercially useful trade route for Spain, Charles approved the expedition, and provided most of the funding.

On 10 August 1519, the five ships under Magellan's command left Seville and descended the Guadalquivir River to Sanlúcar de Barrameda, at the mouth of the river. There they remained more than five weeks.

The fleet left Spain on 20 September 1519, sailing west across the Atlantic toward South America. Magellan's fleet consisted of five ships, carrying supplies for two years of travel. The crew consisted of about 270 men. Most were Spanish, but around 40 were Portuguese.

Rio de Janeiro, Brazil
Pedro Álvares Cabral had claimed Brazil for Portugal in 1500, 20 years before Magellan's voyage. This 1922 painting depicts his arrival in Porto Seguro and first encounter with the natives.

On 13 December, the fleet reached Rio de Janeiro, Brazil. Though nominally Portuguese territory, they maintained no permanent settlement there at the time. Seeing no Portuguese ships in the harbour, Magellan knew it would be safe to stop.

The fleet spent 13 days in Rio, during which they repaired their ships, stocked up on water and food (such as yam, cassava, and pineapple), and interacted with the locals. The expedition had brought with them a great quantity of trinkets intended for trade, such as mirrors, combs, knives and bells. The locals readily exchanged food and local goods (such as parrot feathers) for such items. The crew also found they could purchase sexual favours from the local women. Historian Ian Cameron described the crew's time in Rio as "a saturnalia of feasting and lovemaking".

On 27 December, the fleet left Rio de Janeiro. Pigafetta wrote that the natives were disappointed to see them leave, and that some followed them in canoes trying to entice them to stay.

After three months of searching (including a false start in the estuary of Río de la Plata), weather conditions forced the fleet to stop their search to wait out the winter. They found a sheltered natural harbor at the port of Saint Julian, and remained there for five months. Shortly after landing at St. Julian, there was a mutiny attempt led by the Spanish captains Juan de Cartagena, Gaspar de Quesada and Luis de Mendoza. Magellan barely managed to quell the mutiny, despite at one point losing control of three of his five ships to the mutineers. Mendoza was killed during the conflict, and Magellan sentenced Quesada and Cartagena to being beheaded and marooned, respectively. Lower-level conspirators were made to do hard labor in chains over the winter, but later freed.

During the winter, one of the fleet's ships, the Santiago, was lost in a storm while surveying nearby waters, though no men were killed. Following the winter, the fleet resumed their search for a passage to the Pacific in October 1520. Three days later, they found a bay which eventually led them to a strait, now known as the Strait of Magellan, which allowed them passage through to the Pacific. While exploring the strait, one of the remaining four ships, the San Antonio, deserted the fleet, returning east to Spain. The fleet reached the Pacific by the end of November 1520. Based on the incomplete understanding of world geography at the time, Magellan expected a short journey to Asia, perhaps taking as little as three or four days. In fact, the Pacific crossing took three months and twenty days. The long journey exhausted their supply of food and water, and around 30 men died, mostly of scurvy. Magellan himself remained healthy, perhaps because of his personal supply of preserved quince.

On 6 March 1521, the exhausted fleet made landfall at the island of Guam and were met by native Chamorro people who came aboard the ships and took items such as rigging, knives, and a ship's boat. The Chamorro people may have thought they were participating in a trade exchange (as they had already given the fleet some supplies), but the crew interpreted their actions as theft. Magellan sent a raiding party ashore to retaliate, killing several Chamorro men, burning their houses, and recovering the 'stolen' goods

On 27 April, Magellan and members of his crew attempted to subdue the Mactan natives by force, but in the ensuing battle, the Europeans were overpowered and Magellan was killed by Lapulapu, a native chieftain in Mactan.

Following his death, Magellan was initially succeeded by co-commanders Juan Serrano and Duarte Barbosa (with a series of other officers later leading). The fleet left the Philippines (following a bloody betrayal by former ally Rajah Humabon) and eventually made their way to the Moluccas in November 1521. Laden with spices, they attempted to set sail for Spain in December, but found that only one of their remaining two ships, the Victoria, was seaworthy.

The Victoria set sail via the Indian Ocean route home on 21 December 1521, commanded by Juan Sebastián Elcano. By 6 May 1522 the Victoria rounded the Cape of Good Hope, with only rice for rations.

Twenty crewmen died of starvation by 9 July 1522, when Elcano put into Portuguese Cape Verde for provisions. The crew was surprised to learn that the date was actually 10 July 1522, as they had recorded every day of the three-year journey without omission. They had no trouble making purchases at first, using the cover story that they were returning to Spain from the Americas. However, the Portuguese detained 13 crew members after discovering that Victoria was carrying spices from the East Indies. The Victoria managed to escape with its cargo of 26 tons of spices (cloves and cinnamon).

On 6 September 1522, Elcano and the remaining crew of Magellan's voyage arrived in Sanlúcar de Barrameda in Spain aboard Victoria, almost exactly three years after they departed. They then sailed upriver to Seville, and from there overland to Valladolid, where they appeared before the Emperor.

When Victoria, the one surviving ship and the smallest carrack in the fleet, returned to the harbour of departure after completing the first circumnavigation of the Earth, only 18 men out of the original 270 men were on board. In addition to the returning Europeans, the Victoria had aboard three Moluccans who came aboard at Tidore.

Magellan has come to be renowned for his navigational skill and tenacity. The first circumnavigation has been called "the greatest sea voyage in the Age of Discovery", and even "the most important maritime voyage ever undertaken". Appreciation of Magellan's accomplishments may have been enhanced over time by the failure of subsequent expeditions which attempted to retrace his route, beginning with the Loaísa expedition in 1525 (which featured Juan Sebastián Elcano as second-in-command). The next expedition to successfully complete a circumnavigation, led by Francis Drake, would not occur until 1580, 58 years after the return of the Victoria.

Magellan named the Pacific Ocean (which was also often called the Sea of Magellan in his honor until the eighteenth century), and lends his name to the Strait of Magellan.

Even though Magellan did not survive the trip, he has received more recognition for the expedition than Elcano has, since Magellan was the one who started it, Portugal wanted to recognize a Portuguese explorer, and Spain feared Basque nationalism. 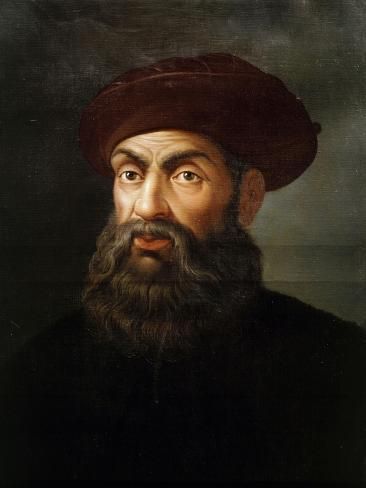 How well do you know the Voyages of Ferdinand Magellan?
Play Timelines