Tang defeats the kingdom of Goguryeo

Reign of Zhongzong of Tang

The Tang dynasty was an imperial dynasty of China that ruled from 618 to 907, with an interregnum between 690 and 705. It was preceded by the Sui dynasty and followed by the Five Dynasties and Ten Kingdoms period. Historians generally regard the Tang as a high point in Chinese civilization, and a golden age of cosmopolitan culture. Tang territory, acquired through the military campaigns of its early rulers, rivaled that of the Han dynasty.

The transition from Sui to Tang (613-628) refers to the period between the end of the Sui dynasty and the start of the Tang dynasty. The Sui dynasty's territories were carved into a handful of short-lived states by its officials, generals, and agrarian rebel leaders. A process of elimination and annexation followed that ultimately culminated in the consolidation of the Tang dynasty by the former Sui general Li Yuan. Near the end of the Sui, Li Yuan installed the puppet child emperor Yang You. Li later executed Yang and proclaimed himself emperor of the new Tang dynasty.

After the Sui dynasty collapses, the country falls into chaos. Li Yuan, a vassal in the Sui court, raises an army and proclaims himself Emperor Gaozu in 618. He changes the state title to Tang, thus establishing the Tang dynasty, while maintaining Chang'an as the capital city. Gaozu works to reform taxation and coinage.

The Xuanwu Gate Incident was a palace coup for the throne of the Tang dynasty on 2 July 626, when Prince Li Shimin (Prince of Qin) and his followers assassinated Crown Prince Li Jiancheng and Prince Li Yuanji (Prince of Qi). Li Shimin, the second son of Emperor Gaozu, was in an intense rivalry with his elder brother Li Jiancheng and younger brother Li Yuanji. He took control and set up an ambush at Xuanwu Gate, the northern gate leading to the Palace City of the imperial capital Chang'an. There, Li Jiancheng and Li Yuanji were murdered by Li Shimin and his men. Within three days after the coup, Li Shimin was installed as the crown prince. Emperor Gaozu abdicated another sixty days later and passed the throne to Li Shimin, who would become known as Emperor Taizong.

Emperor Gaozu yields the throne to Li Shimin, who names himself Emperor Taizong, second emperor of the Tang dynasty.

Sa'adibnWaqqas, a maternal uncle of Muhammad, leads a delegation to China and invites Emperor Gaozong to embrace Islam. To show his admiration for the religion, the Emperor orders China's first mosque to be built in Canton.

Woodblock printing was developed in the early Tang era with examples of its development dating to around 650 A.D. More common use is found during the ninth century, with calendars, children’s books, test guides, charm manuals, dictionaries and almanacs. Commercial books began to be printed around 762 B.C. In 835 B.C. there was a ban on private printing brought on because of the distribution of unsanctioned calendars. The oldest surviving printed document from the Tang era is the Diamond Sutra from 868 A.D., a 16-foot scroll featuring calligraphy and illustrations.
657 Jan 1

The Battle of Irtysh River or Battle of Yexi River was a battle in 657 between Tang Dynasty general Su Dingfang and the Western Turkic Khaganate qaghan Ashina Helu during the Tang campaign against the Western Turks. It was fought along the Irtysh River near the Altai Mountains. Helu's forces, consisting of 100,000 cavalry, were ambushed by Su as Helu chased decoy Tang troops that Su had deployed. Helu was defeated during Su's surprise attack, and lost most of his soldiers. Turkic tribes loyal to Helu surrendered, and the retreating Helu was captured the next day. Helu's defeat ended the Western Turkic Khaganate, strengthened Tang control of Xinjiang, and led to Tang suzerainty over the western Turks

Tang defeats the kingdom of Goguryeo

In East Asia, Tang Chinese military campaigns were less successful elsewhere than in previous imperial Chinese dynasties. Like the emperors of the Sui dynasty before him, Taizong established a military campaign in 644 against the Korean kingdom of Goguryeo in the Goguryeo–Tang War; however, this led to its withdrawal in the first campaign because they failed to overcome the successful defense led by General Yeon Gaesomun. Allying with the Korean Silla Kingdom, the Chinese fought against Baekje and their Yamato Japanese allies in the Battle of Baekgang in August 663, a decisive Tang–Silla victory. The Tang dynasty navy had several different ship types at its disposal to engage in naval warfare, these ships described by Li Quan in his Taipai Yinjing (Canon of the White and Gloomy Planet of War) of 759. The Battle of Baekgang was actually a restoration movement by remnant forces of Baekje, since their kingdom was toppled in 660 by a joint Tang–Silla invasion, led by Chinese general Su Dingfang and Korean general Kim Yushin (595–673). In another joint invasion with Silla, the Tang army severely weakened the Goguryeo Kingdom in the north by taking out its outer forts in the Year 645. With joint attacks by Silla and Tang armies under commander Li Shiji (594–669), the Kingdom of Goguryeo was destroyed by 668.

Wu Zhao, commonly known as Wu Zetian (17 February 624-16 December 705), alternatively Wu Hou, and during the later Tang dynasty as Tian Hou, was the de facto ruler of China, first through her husband the Emperor Gaozong and then through her sons the Emperors Zhongzong and Ruizong, from 665 to 690. She subsequently became empress regnant of the Zhou dynasty (周) of China, ruling from 690 to 705.She is notable for being the only female monarch in the history of China.

Wang Wei was a Chinese poet, musician, painter, and politician during the Tang dynasty. He was one of the most famous men of arts and letters of his time. Many of his poems are preserved, and twenty-nine were included in the highly influential 18th-century anthology Three Hundred Tang Poems.

Li Bai was a Chinese poet acclaimed from his own day to the present as a genius and a romantic figure who took traditional poetic forms to new heights. He and his friend Du Fu (712–770) were the two most prominent figures in the flourishing of Chinese poetry in the Tang dynasty, which is often called the "Golden Age of Chinese Poetry". The expression "Three Wonders" denote Li Bai's poetry, Pei Min's swordplay, and Zhang Xu's calligraphy.

Reign of Zhongzong of Tang

Emperor Xuanzong, was the fourth Emperor of the Tang dynasty of China, ruling briefly in 684 and again from 705 to 710. During the first period, he did not rule, and the entire government was in the hands of his mother, Empress Wu Zetian and was effectively overthrown by her imperial power after opposing his mother.

In the second reign period, most of the government was in the hands of his beloved wife Empress Wei. He is renowned for the cultural heights reached during his rule from 712 to 756 A.D. He welcomed Buddhist and Taoist clerics to his court, including teachers of Tantric Buddhism, a recent form of the religion. Xuanzong had a passion for music and horses. To this end he owned a troupe of dancing horses and invited renowned horse painter Han Gan into his court. He also created the Imperial Music Academy, taking advantage of the new international influence on Chinese music. The fall of Xuanzong became an enduring love story in China. Xuanzong fell so much in love with concubine Yang Guifei that he began to ignore his royal duties and also promote her family members to high government positions. 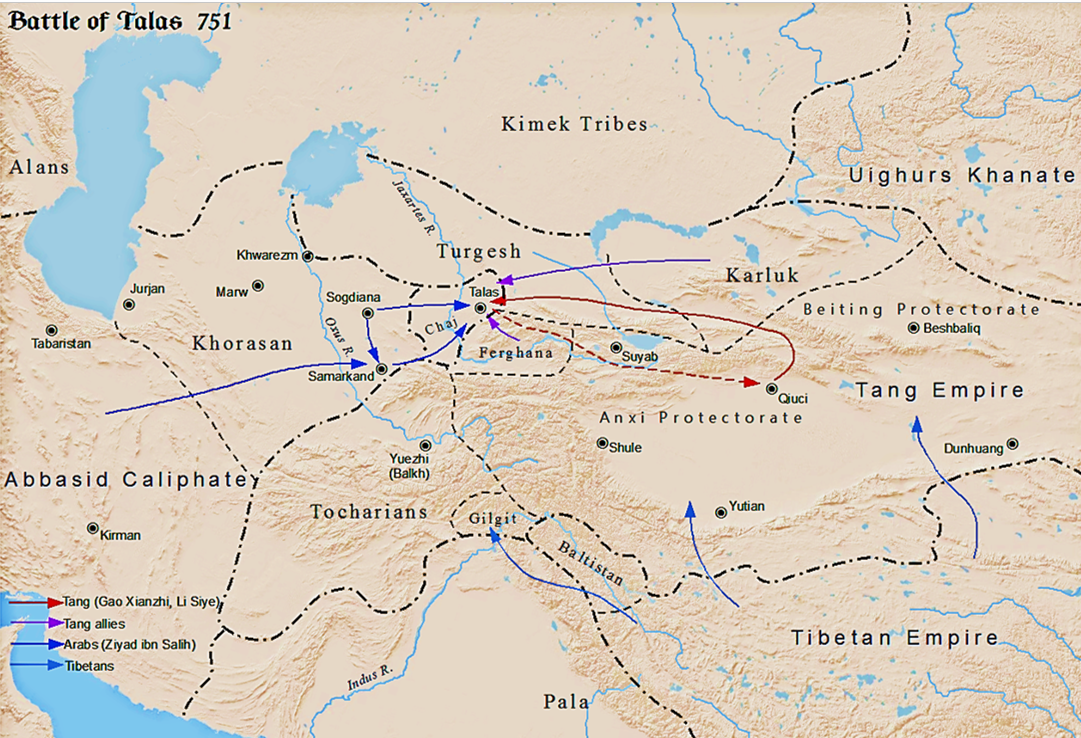 The Battle of Talas was a military encounter and engagement between the Islamic civilization and the Chinese civilization in the 8th century, specifically between Abbasid Caliphate along with its ally, the Tibetan Empire, against the Chinese Tang dynasty. In July 751 AD, Tang and Abbasid forces met in the valley of the Talas River to vie for control over the Syr Darya region of central Asia. According to Chinese sources, after several days of stalemate, the Karluk Turks, originally allied to the Tang Dynasty, defected to the Abbasid army and tipped the balance of power, resulting in a Tang rout. The defeat marked the end of the Tang westward expansion and resulted in Muslims control of Transoxiana for the next 400 years. Control of the region was economically beneficial for the Abbasids because it was on the Silk Road. Chinese prisoners captured in the aftermath of the battle are said to have brought paper-making technology to West Asia.

The An Lushan Rebellion was a rebellion against the Tang dynasty of China (618 to 907) towards the mid-point of the dynasty, attempting to replace it with a dynasty named Yan. This rebellion was originally lead by An Lushan, a general officer of the Tang military system. This event involves actual military activity and direct deaths from battle; but, also, involves major associated significant population loss from famine, population dislocations, and so on.

A great flood along the Grand Canal and on the North China Plain kills tens of thousands of people. The government's inability to respond to the flood contributes to growing resentment among the peasants and lays the groundwork for rebellion.

Huang Chao leads a powerful rebellion against the Tang beginning in 875, and captures the capital at Chang'an in 881. Although he is ultimately defeated in 883, his revolt severely weakens the government's control over the country, and the dynasty quickly crumbles.
Source:Wikipedia Link
907 Jan 1

Huang Chao's rebellion leads to a struggle for power in China, and military leader Zhu Wen emerges victorious. In 907 he forces the emperor to abdicate and proclaims himself the first emperor of the Hou Liang dynasty, thus ending the Tang dynasty.

In addition to natural calamities and jiedushi amassing autonomous control, the Huang Chao Rebellion (874–884) resulted in the sacking of both Chang'an and Luoyang, and took an entire decade to suppress. The Tang never recovered from this rebellion, weakening it for future military powers to replace it. Large groups of bandits in the size of small armies ravaged the countryside in the last years of the Tang.;

During the last two decades of the Tang dynasty, the gradual collapse of central authority led to the rise of two prominent rival military figures over northern China: Li Keyong and Zhu Wen. Southern China would remain splintered into various small kingdoms until most of China was reunified under the Song dynasty (960–1279). Control over parts of northeast China and Manchuria by the Liao dynasty of the Khitan people also stemmed from this period.; 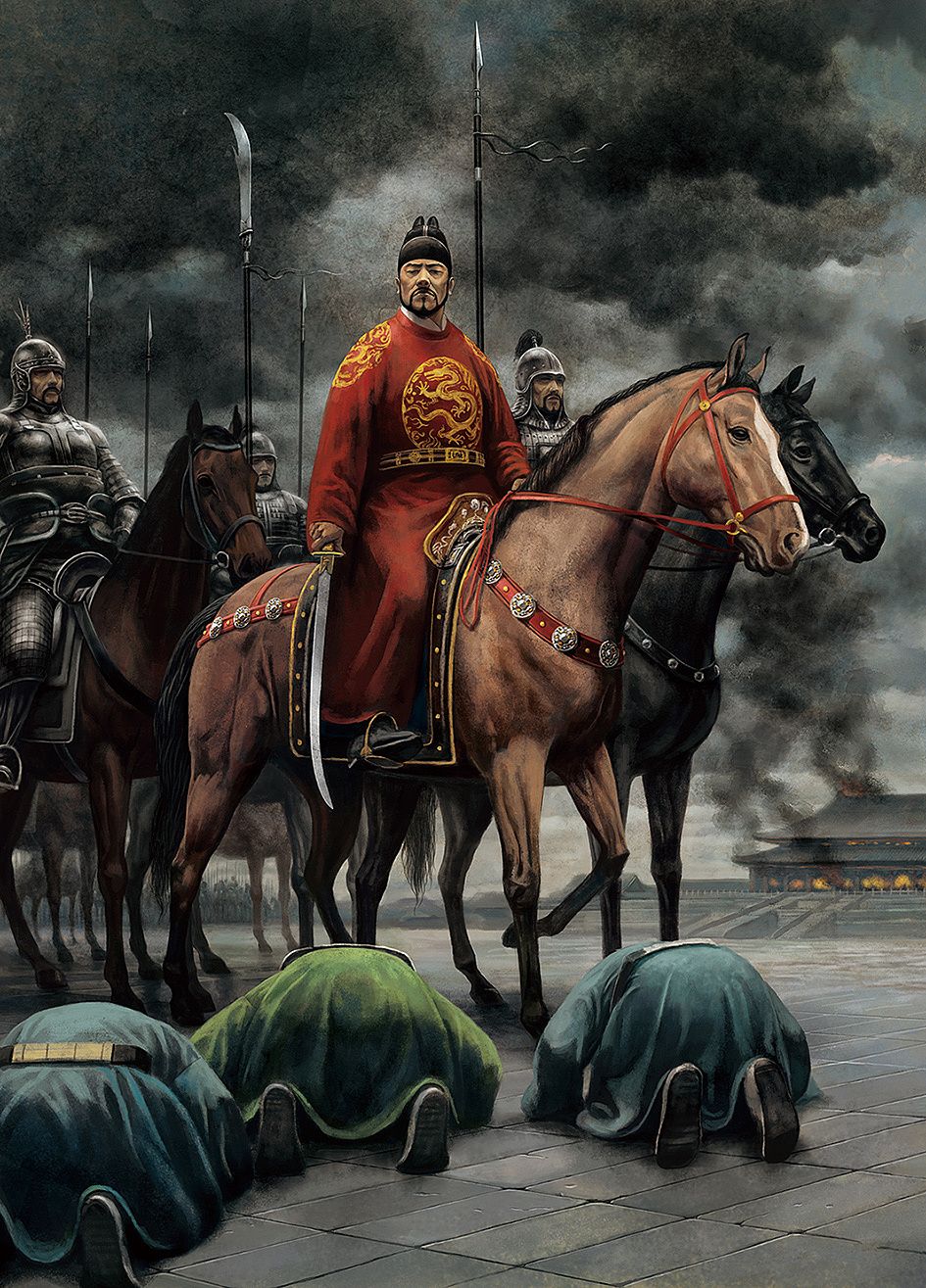 How well do you know the Tang Dynasty?
Play Timelines