Northmen winters for the first time

Arrival of the Great Heathen Army

Treaty of Wedmore and Danelaw

From 865 the Norse attitude towards the British Isles changed, as they began to see it as a place for potential colonisation rather than simply a place to raid. As a result of this, larger armies began arriving on Britain's shores, with the intention of conquering land and constructing settlements there.

In the final decade of the eighth century, Viking raiders attacked a series of Christian monasteries in the British Isles. Here, these monasteries had often been positioned on small islands and in other remote coastal areas so that the monks could live in seclusion, devoting themselves to worship without the interference of other elements of society. At the same time, it made them isolated and unprotected targets for attack.

The first known account of a Viking raid in Anglo-Saxon England comes from 789, when three ships from Hordaland (in modern Norway) landed in the Isle of Portland on the southern coast of Wessex. They were approached by Beaduheard, the royal reeve from Dorchester, whose job it was to identify all foreign merchants entering the kingdom, and they proceeded to kill him. There were almost certainly unrecorded earlier raids. In a document dating to 792, King Offa of Mercia set out privileges granted to monasteries and churches in Kent, but he excluded military service "against seaborne pirates with migrating fleets", showing that Viking raids were already an established problem. In a letter of 790-92 to King Æthelred I of Northumbria, Alcuin berated English people for copying the fashions of pagans who menaced them with terror. This shows that there were already close contacts between the two peoples, and the Vikings would have been well informed about their targets.

The next recorded attack against the Anglo-Saxons came the following year, in 793, when the monastery at Lindisfarne, an island off England's eastern coast, was sacked by a Viking raiding party on 8 June. The following year, they sacked the nearby Monkwearmouth–Jarrow Abbey.In 795, they once again attacked, this time raiding Iona Abbey off Scotland's west coast.This monastery was attacked again in 802 and 806, when 68 people living there were killed. After this devastation, the monastic community at Iona abandoned the site and fled to Kells in Ireland. In the first decade of the ninth century, Viking raiders began to attack coastal districts of Ireland. In 835, the first major Viking raid in southern England took place and was directed against the Isle of Sheppey.

In 793, a Viking raid on Lindisfarne caused much consternation throughout the Christian west and is now often taken as the beginning of the Viking Age. During the attack many of the monks were killed, or captured and enslaved. These preliminary raids, unsettling as they were, were not followed up. The main body of the raiders passed north around Scotland. The 9th-century invasions came not from Norway, but from the Danes from around the entrance to the Baltic.

Northmen winters for the first time 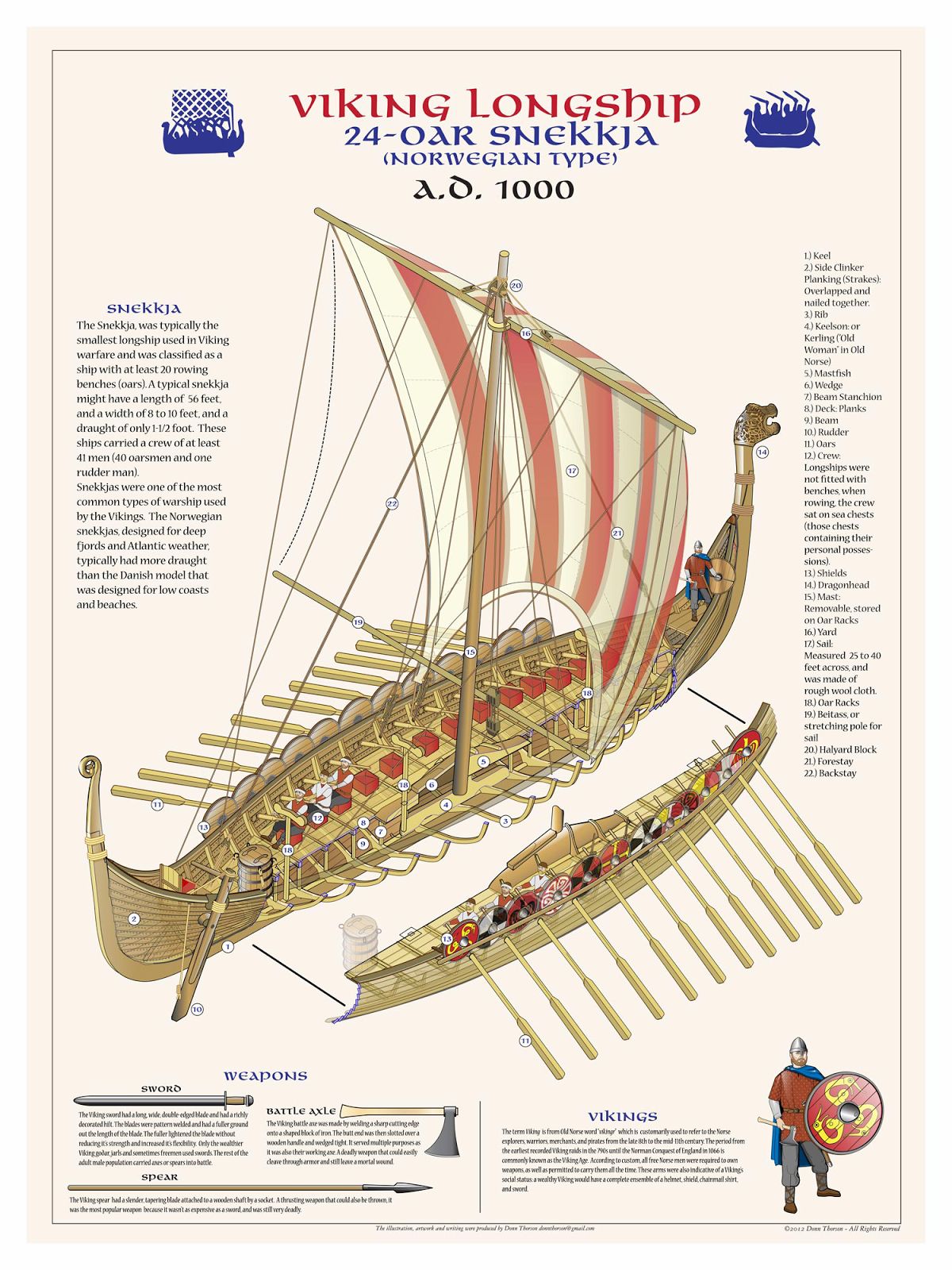 According the the Anglo-Saxon Chronicle:

"In this year Ealdorman Ceorl with the contingent of the men of Devon fought against the heathen army at Wicganbeorg, and the English made a great slaughter there and had the victory. And for the first time, heathen men stayed through the winter on Thanet. And the same year 350 ships came into the mouth of the Thames and stormed Canterbury and London and put to flight Brihtwulf, king of the Mercians, with his army, and went south across the Thames into Surrey. And King, Æthelwulf and his son Æthelbald fought against them at Aclea with the army of the West Saxons, and there inflicted the greatest slaughter [on a heathen army] that we have ever heard of until this present day, and had the victory there."

"And the same year, King Athelstan and Ealdorman Ealhhere fought in ships and slew a great army at Sandwich in Kent, and captured nine ships and put the others to flight."

Arrival of the Great Heathen Army

The Great Heathen Army also known as the Viking Great Army, was a coalition of Scandinavian warriors, who invaded England in 865 AD. Since the late 8th century, the Vikings had been engaging in raids on centres of wealth such as monasteries. The Great Heathen Army was much larger and aimed to occupy and conquer the four English kingdoms of East Anglia, Northumbria, Mercia and Wessex.

The kingdom of Northumbria was in the middle of a civil war with Ælla and Osberht both claiming the crown. The Vikings led by Ubba and Ivar were able to take the city with little trouble.

The Battle of York was fought between the Vikings of the Great Heathen Army and the Kingdom of Northumbria on the 21 March 867. In the spring of 867 Ælla and Osberht put aside their differences and united in an attempt to push the invaders out of Northumbria. The battle started well for the Northumbrian forces, who were able to break through the city's defences. It was at this point that the experience of the Viking warriors was able to show through, as the narrow streets nullified any advantage of numbers the Northumbrians may have had. The battle ended with a slaughter of the Northumbrian army, and the death of both Ælla and Osberht.

The Viking king of Northumbria, Halfdan Ragnarrson – one of the leaders of the Viking Great Army (known to the Anglo-Saxons as the Great Heathen Army) – surrendered his lands to a second wave of Viking invaders in 876. In the next four years, Vikings gained further land in the kingdoms of Mercia and East Anglia as well.

A Viking invasion took King Alfred by surprise. When much of Wessex was overrun Alfred was driven into hiding at Athelney, in the marshlands of central Somerset. He built a fortress there, reinforcing the existing defences of an earlier Iron Age fort. It was at Athelney that Alfred planned his campaign against the Vikings. The story is that, in disguise, Alfred begged refuge from a peasant household, where he was asked to carry out tasks, including watching the food cooking on the fire. Preoccupied, and unaccustomed to cooking duties, he let the cakes burn and ruined the household's meal. The woman of the house scolded him severely.

At the Battle of Edington, an army of the Anglo-Saxon kingdom of Wessex under Alfred the Great defeated the Great Heathen Army led by the Dane Guthrum on a date between 6 and 12 May 878, resulting in the Treaty of Wedmore later the same Year.

Treaty of Wedmore and Danelaw

The Wessex and the Norse-controlled, East Anglian governments signed the Treaty of Wedmore, which established a boundary between the two kingdoms. The area to the north and east of this boundary became known as the Danelaw because it was under Norse political influence, whilst those areas south and west of it remained under Anglo-Saxon dominance.

Alfred's government set about constructing a series of defended towns or burhs, began the construction of a navy, and organised a militia system (the fyrd) whereby half of his peasant army remained on active service at any one time. To maintain the burhs, and the standing army, he set up a taxation and conscription system known as the Burghal Hidage.

A new Viking army, with 250 ships, established itself in Appledore, Kent and another army of 80 ships soon afterwards in Milton Regis. The army then launched a continuous series of attacks on Wessex. However, due in part to the efforts of Alfred and his army, the kingdom's new defences proved to be a success, and the Viking invaders were met with a determined resistance and made less of an impact than they had hoped. By 896, the invaders dispersed - instead settling in East Anglia and Northumbria, with some instead sailing to Normandy.
937 Jan 1

The Battle of Brunanburh was fought in 937 between Æthelstan, King of England, and an alliance of Olaf Guthfrithson, King of Dublin; Constantine II, King of Scotland, and Owain, King of Strathclyde. The battle is often cited as the point of origin for English nationalism: historians such as Michael Livingston argue that "the men who fought and died on that field forged a political map of the future that remains [in modernity], arguably making the Battle of Brunanburh one of the most significant battles in the long history not just of England, but of the whole of the British Isles."

The English government decided that the only way of dealing with these attackers was to pay them protection money, and so in 991 they gave them £10,000. This fee did not prove to be enough, and over the next decade the English kingdom was forced to pay the Viking attackers increasingly large sums of money.

St. Brice's day massacre was the killing of Danes in the Kingdom of England on Friday, the 13th of November 1002, ordered by King Æthelred the Unready. In response to the frequent Danish raids, King Æthelred ordered the execution of all Danes living in England.

King Æthelred sent his sons Edward and Alfred to Normandy, and himself retreated to the Isle of Wight, and then followed them into exile. On Christmas day 1013 Sweyn was declared King of England. Sweyn began to organise his vast new kingdom, but he died there on 3 February 1014, having ruled England for only five weeks. King Æthelred returned.

Sweyn's son, the Danish King Cnut set sail for England with a Danish army of perhaps 10,000 in a fleet of 200 longships. Cnut was at the head of an array of Vikings from all over Scandinavia. The invasion force was to engage in often close and grisly warfare with the English for the next fourteen months. Practically all of the battles were fought against the eldest son of Æthelred, Edmund Ironside.
1016 Oct 18

The Battle of Assandun was fought between Danish and English armies . It ended in victory for the Danes, led by Cnut the Great, who triumphed over the English army led by King Æthelred. The battle was the conclusion to the Danish reconquest of England. During the battle, Eadric Streona, the Ealderman of Mercia, left the battle allowing the Scandinavians to break through the English lines and win a decisive victory.
Source:Wikipedia Link
1017 Jan 1

Cnut and his sons, Harold Harefoot and Harthacnut, ruled England over a combined 26-year period (1016–1042). After Harthacnut's death, the English throne reverted to the House of Wessex under Æthelred's younger son Edward the Confessor (reigned 1042–1066). As a Danish prince, Cnut won the throne of England in 1016 in the wake of centuries of Viking activity in northwestern Europe. His later accession to the Danish throne in 1018 brought the crowns of England and Denmark together. Cnut sought to keep this power-base by uniting Danes and English under cultural bonds of wealth and custom, as well as through sheer brutality. Cnut ruled England for nearly two decades. The protection he lent against Viking raiders—many of them under his command—restored the prosperity that had been increasingly impaired since the resumption of Viking attacks in the 980s. In turn the English helped him to establish control over the majority of Scandinavia, too

Harald Hardrada led an invasion of England in 1066, attempting to seize the English throne during the succession dispute following the death of Edward the Confessor. The invasion was repulsed at the Battle of Stamford Bridge, and Hardrada was killed along with most of his men. While the Viking attempt was unsuccessful, the near simultaneous Norman invasion was successful in the south at the Battle of Hastings. Hardrada's invasion has been described as the end of the Viking Age in Britain.

King of Denmark and England

Lady of the Mercians

Lord of the Mercians

King of the Anglo-Saxons 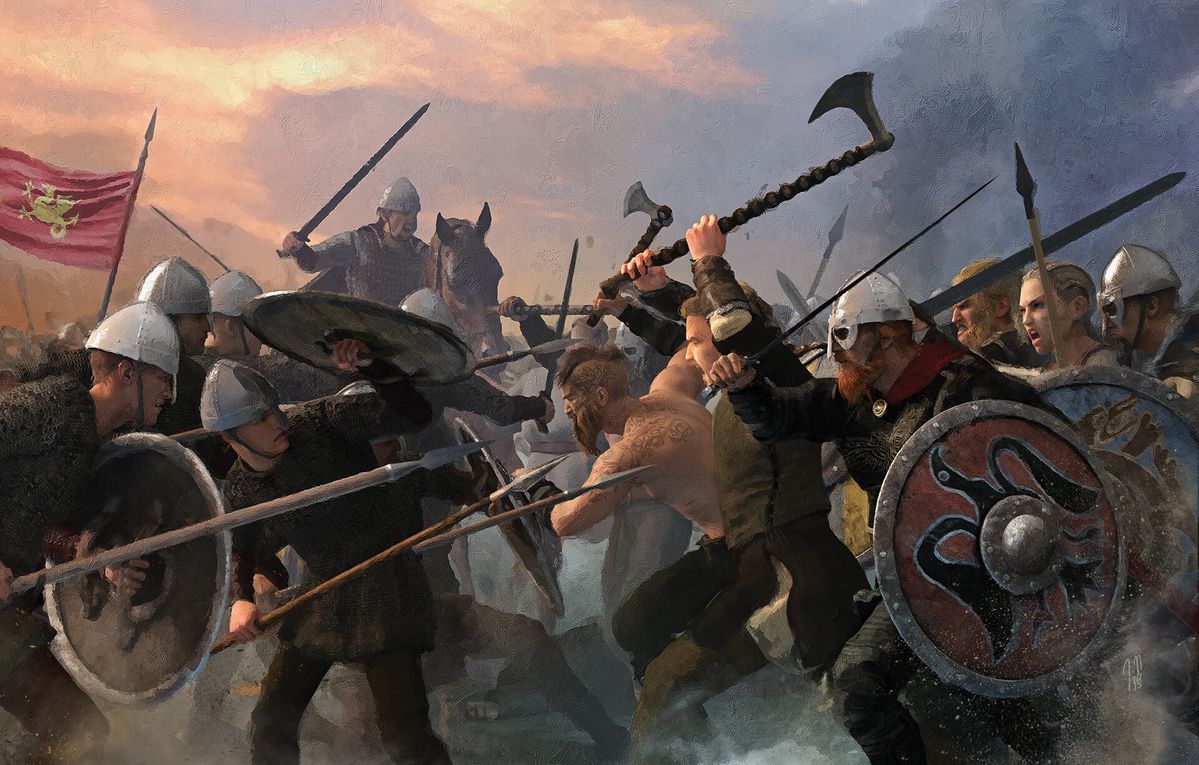 How well do you know the Viking Invasions of England?
Play Timelines