Mission to the Khazars

Mission to the Slavs

Methodius goes back with papal authority

Successors of the brothers spread

Cyril (826–869) and Methodius (815–885) were two brothers and Byzantine Christian theologians and missionaries. For their work evangelizing the Slavs, they are known as the "Apostles to the Slavs". They are credited with devising the Glagolitic alphabet, the first alphabet used to transcribe Old Church Slavonic. After their deaths, their pupils continued their missionary work among other Slavs. Both brothers are venerated in the Orthodox Church as saints with the title of "equal-to-apostles". In 1880, Pope Leo XIII introduced their feast into the calendar of the Roman Catholic Church.

Methodius was born Michael and was given the name Methodius upon becoming a monk at Mysian Olympus (present-day Uludağ), in northwest Turkey. Their father was Leo, a droungarios of the Byzantine theme of Thessalonica, and their mother was Maria.

The two brothers lost their father when Cyril was fourteen, and the powerful minister Theoktistos, who was logothetes tou dromou, one of the chief ministers of the Empire, became their protector. He was also responsible, along with the regent Bardas, for initiating a far-reaching educational program within the Empire which culminated in the establishment of the University of Magnaura, where Cyril was to teach.
850 Jan 1

Cyril was ordained as a priest and served as an official at the Hagia Sophia church where he developed a close relationship with the Patriarch of Constantinople, the bishop Photios. The brilliant scholar quickly became the bishop's librarian. Cyril became a teacher of philosophy at the Magnaura university in Constantinople where he gained the epithet “Constantine the Philosopher”.

Mission to the Khazars

Byzantine Emperor Michael III and the Patriarch of Constantinople Photius (a professor of Cyril's at the University and his guiding light in earlier years), sent Cyril on a missionary expedition to the Khazars who had requested a scholar be sent to them who could converse with both Jews and Saracens. The trip, unfortunately, ended in failure if it had intended to convert the Khazars to Christianity as the Byzantines only managed to baptise around 200 of them. The Khazaria state eventually adopted Judaism instead. Cyril did bring back souvenirs, though, said to be the relics of the exiled 1st century CE Bishop of Rome, Saint Clement.

Mission to the Slavs

Great Moravia
Mission to the Slavs

Prince Rastislav of Great Moravia requested that Emperor Michael III and the Patriarch Photius send missionaries to evangelize his Slavic subjects. His motives in doing so were probably more political than religious. The Emperor quickly chose to send Cyril, accompanied by his brother Methodius. The request provided a convenient opportunity to expand Byzantine influence. Their first work seems to have been the training of assistants.

Cyril, to facilitate his preaching to the Slavs, invented, with some help from Methodius, the Glagolitic script which used some letters from Hebrew and Greek cursive writing to accurately capture the unique sounds of the Slavic language. The brothers had created the script before they even left home (the Slavic language having no written form previously) and used it to make translations of the liturgy of John Chrysostomos (Bishop of Constantinople from 398 to 404 CE), the Psalms of the Old Testament and the Gospels of the New Testament. They traveled to Great Moravia to promote it. They enjoyed considerable success in this endeavour. However, they came into conflict with German ecclesiastics who opposed their efforts to create a specifically Slavic liturgy.
866 Jan 1

Although he succeeded in setting up many new churches, unfortunately for Cyril, Frankish bishops in Moravia who were pushing the case for the rival western half of the Christian church opposed his missionary work at every step. Conservative church clergy were also against the holding of services (or even disseminating religious literature) in any language outside the traditional trio of Latin, Greek, and Hebrew.

In 867, Pope Nicholas I (858-867) invited the brothers to Rome. Their evangelizing mission in Moravia had by this time become the focus of a dispute with Archbishop Adalwin of Salzburg and Bishop Ermanrich of Passau, who claimed ecclesiastical control of the same territory and wished to see it use the Latin liturgy exclusively. Travelling with a retinue of disciples, and passing through Pannonia (the Balaton Principality), where they were well received by Prince Kocel. They arrived in Rome a Year later, where they were warmly received. This was partly due to their bringing with them the relics of Saint Clement; the rivalry with Constantinople as to the jurisdiction over the territory of the Slavs would incline Rome to value the brothers and their influence.
Source:Wikipedia Link
869 Jan 1

Methodius goes back with papal authority

The new Pope Adrian II gave Methodius the title of Archbishop of Sirmium (now Sremska Mitrovica in Serbia) and sent him back to Pannonia in 869, with jurisdiction over all of Moravia and Pannonia, and authorisation to use the Slavonic Liturgy. Methodius now continued the work among the Slavs alone.

Feeling his end approaching, Cyril became a Basilian monk, was given the new name Cyril, and died in Rome fifty days later.

The East Frankish rulers and their bishops decided to remove Methodius. The archiepiscopal claims of Methodius were considered such an injury to the rights of Salzburg that he was captured and forced to answer to East Frankish bishops: Adalwin of Salzburg, Ermanrich of Passau, and Anno of Freising. After a heated discussion, they declared the deposition of the intruder, and ordered him to be sent to Germany, where he was kept prisoner in a monastery for two and a half years.

Rome declared emphatically for Methodius, and sent a bishop, Paul of Ancona, to reinstate him and punish his enemies, after which both parties were commanded to appear in Rome with the legate. The new Pope John VIII secured the release of Methodius, but instructed him to stop using the Slavonic Liturgy.

Methodius was summoned to Rome on charges of heresy and using Slavonic. This time Pope John was convinced by the arguments that Methodius made in his defence and sent him back cleared of all charges, and with permission to use Slavonic. The Carolingian bishop who succeeded him, Witching, suppressed the Slavonic Liturgy and forced the followers of Methodius into exile. Many found refuge with Knyaz Boris of Bulgaria, under whom they reorganised a Slavic-speaking Church. Meanwhile, Pope John's successors adopted a Latin-only policy which lasted for centuries.

Successors of the brothers spread

Bulgaria
Successors of the brothers spread

Pope Stephen V exiled the disciples of the two brothers from Great Moravia in 885. They fled to the First Bulgarian Empire, where they were welcomed and commissioned to establish theological schools. There they and scholar Saint Clement of Ohrid devised the Cyrillic script on the basis of the Glagolitic. Cyrillic gradually replaced Glagolitic as the alphabet of the Old Church Slavonic language, which became the official language of the Bulgarian Empire and later spread to the Eastern Slav lands of Kievan Rus'. Cyrillic eventually spread throughout most of the Slavic world to become the standard alphabet in the Eastern Orthodox Slavic countries. Hence, Cyril and Methodius' efforts also paved the way for the spread of Christianity throughout Eastern Europe. 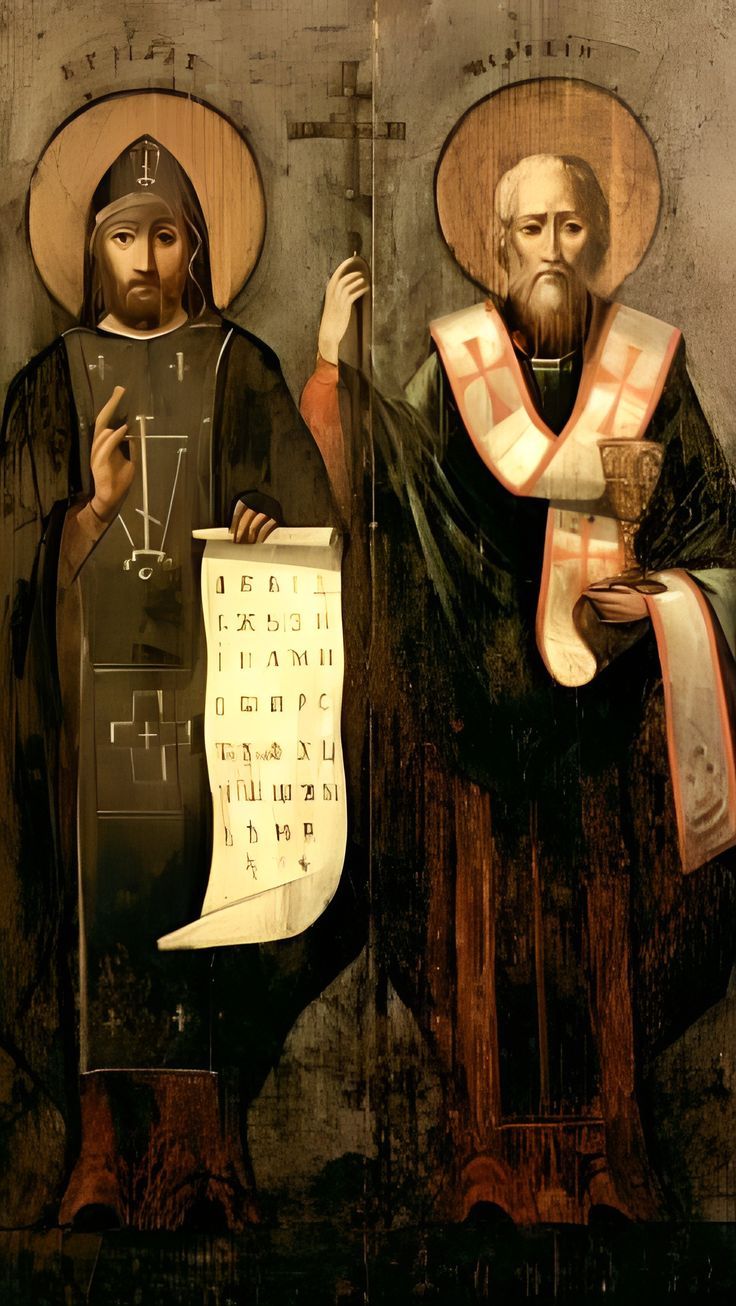 How well do you know the Saints Cyril and Methodius?
Play Timelines