Declaration of revolution by Alexandros Ypsilantis

Raising of the banner

Destruction of the Turkish Army

Establishment of the Kingdom of Greece

The Greek War of Independence, also known as the Greek Revolution, was a successful war of independence waged by Greek revolutionaries against the Ottoman Empire between 1821 and 1829. The Greeks were later assisted by the British Empire, Kingdom of France, and the Russian Empire, while the Ottomans were aided by their North African vassals, particularly the eyalet of Egypt. The war led to the formation of modern Greece.

The Fall of Constantinople on 29 May 1453 and the subsequent fall of the successor states of the Byzantine Empire marked the end of Byzantine sovereignty. After that, the Ottoman Empire ruled the Balkans and Anatolia (Asia Minor), with some exceptions. Greece came under Ottoman rule in the 15th century, in the decades before and after the fall of Constantinople.

Odessa, Ukraine
The Oath of Initiation into the Society, painting by Dionysios Tsokos, 1849.

Filiki Eteria or Society of Friends was a secret organization founded in 1814 in Odessa, whose purpose was to overthrow the Ottoman rule of Greece and establish an independent Greek state. Society members were mainly young Phanariot Greeks from Constantinople and the Russian Empire, local political and military leaders from the Greek mainland and islands, as well as several Orthodox Christian leaders from other nations that were under Hellenic influence, such as Karađorđe from Serbia Tudor Vladimirescu from Romania, and Arvanite military commanders. One of its leaders was the prominent Phanariote Prince Alexander Ypsilantis. The Society initiated the Greek War of Independence in the spring of 1821.

Declaration of revolution by Alexandros Ypsilantis

Alexander Ypsilantis was elected as the head of the Filiki Eteria in April 1820 and took upon himself the task of planning the insurrection. His intention was to raise all the Christians of the Balkans in rebellion and perhaps force Russia to intervene on their behalf. Ypsilantis issued a proclamation calling all Greeks and Christians to rise up against the Ottomans.
Source:Wikipedia Link
1821 Mar 25

Raising of the banner

Greek War of Independence, which made Greece the first country to break away from the Ottoman Empire, begins raising of the banner with the cross in the Monastery of Agia Lavra
1821 Apr 22

Thermopylae, Greece
The Battle of Alamana, by Alexandros Isaias

Even though the battle was ultimately a military defeat for the Greeks, Diakos's death provided the Greek national cause with a stirring myth of heroic martyrdom.
Source:Wikipedia Link
1821 Jun 19

The Battle of Dragashani (or Battle of Drăgășani) was fought on 19 June 1821 in Drăgășani, Wallachia, between the Ottoman forces of Sultan Mahmud II and the Greek Filiki Etaireia insurgents. It was a prelude to the Greek War of Independence.
Source:Wikipedia Link
1822 Jan 1

The Greek Constitution of 1822 was a document adopted by the First National Assembly of Epidaurus on January 1, 1822. Formally it was the Provisional Regime of Greece (Προσωρινό Πολίτευμα της Ελλάδος), sometimes translated as Temporary Constitution of Greece. Considered to be the first constitution of Modern Greece, it was an attempt to achieve temporary governmental and military organisation until the future establishment of a national parliament.

The Chios massacre was the killing of tens of thousands of Greeks on the island of Chios by Ottoman troops during the Greek War of Independence in 1822. Greeks from neighboring islands had arrived on Chios and encouraged the Chiotes to join their revolt. In response, Ottoman troops landed on the island and killed thousands. The massacre of Christians provoked international outrage and led to increasing support for the Greek cause worldwide.

Destruction of the Turkish Army

The Expedition of Dramali also known as Dramali's campaign, or Dramali's expedition, was an Ottoman military campaign led by Mahmud Dramali Pasha during the Greek War of Independence in the summer of 1822. The campaign was a large scale effort by the Ottomans to quell the ongoing Greek rebellion which had begun in 1821, the campaign ended in total failure, resulting in the disastrous defeat of the Ottoman army, which after the campaign ceased to exist as a fighting force.

The Greek War of Independence was marked by two civil wars, which took place in 1823–1825. The conflict had both political and regional dimensions, as it pitted the Roumeliotes (the people of Continental Greece) and the Islanders (the shipowners, especially from Hydra island), against the Peloponnesians or Moreotes. It divided the young nation, and seriously weakened the military preparedness of the Greek forces in the face of the oncoming Egyptian intervention in the conflict.

The third siege of Messolonghi (often erroneously referred to as the second siege) was fought in the Greek War of Independence, between the Ottoman Empire and the Greek rebels, from 15 April 1825 to 10 April 1826. The Ottomans had already tried and failed to capture the city in 1822 and 1823, but returned in 1825 with a stronger force of infantry and a stronger navy supporting the infantry. The Greeks held out for almost a Year before they ran out of food and attempted a mass breakout, which however resulted in a disaster, with the larger part of the Greeks slain. This defeat was a key factor leading to intervention by the Great Powers who, hearing about the atrocities, felt sympathetic to the Greek cause.

The Battle of Maniaki was fought on May 20, 1825 in Maniaki, Greece (in the hills east of Gargalianoi) between Ottoman Egyptian forces led by Ibrahim Pasha and Greek forces led by Papaflessas. The battle ended in an Egyptian victory, during which both Greek commanders, Papaflessas and Pieros Voidis, were killed in action.

The Ottoman–Egyptian invasion of Mani was a campaign during the Greek War of Independence that consisted of three battles. The Maniots fought against a combined Egyptian and Ottoman army under the command of Ibrahim Pasha of Egypt.

Arachova, Greece
The Battle of Arachova

The Battle of Arachova, took place between 18 and 24 November 1826 (N.S.). It was fought between an Ottoman Empire force under the command of Mustafa Bey and Greek rebels under Georgios Karaiskakis. After receiving intelligence of the Ottoman army's maneuvers, Karaiskakis prepared a surprise attack in vicinity of the village of Arachova, in central Greece. On 18 November, Mustafa Bey's 2,000 Ottoman troops were blockaded in Arachova. An 800-man force that attempted to relieve the defenders three days later failed.

The Battle of Navarino was a naval battle fought on 20 October (O. S. 8 October) 1827, during the Greek War of Independence (1821–32), in Navarino Bay (modern Pylos), on the west coast of the Peloponnese peninsula, in the Ionian Sea. Allied forces from Britain, France, and Russia decisively defeated Ottoman and Egyptian forces which were trying to suppress the Greeks, thereby making Greek independence much more likely. An Ottoman armada which, in addition to imperial warships, included squadrons from the eyalets (provinces) of Egypt and Tunis, was destroyed by an Allied force of British, French and Russian warships. It was the last major naval battle in history to be fought entirely with sailing ships, although most ships fought at anchor. The Allies' victory was achieved through superior firepower and gunnery.

Count Ioannis Antonios Kapodistrias is considered the founder of the modern Greek state, and the architect of Greek independence After touring Europe to rally support for the Greek cause, Kapodistrias landed in Nafplion on 7 January 1828, and arrived in Aegina on 8 January 1828. The British didn't allow him to pass from his native Corfu (a British protectorate since 1815 as part of the United States of the Ionian Islands) fearing a possible unrest of the population. It was the first time he had ever set foot on the Greek mainland, and he found a discouraging situation there. Even while fighting against the Ottomans continued, factional and dynastic conflicts had led to two civil wars, which ravaged the country. Greece was bankrupt, and the Greeks were unable to form a united national government. Wherever Kapodistrias went in Greece, he was greeted by large and enthusiastic welcomes from the crowds.

The Russo-Turkish War of 1828–1829 was sparked by the Greek War of Independence of 1821–1829. War broke out after the Ottoman Sultan Mahmud II closed the Dardanelles to Russian ships and revoked the 1826 Akkerman Convention in retaliation for Russian participation in October 1827 in the Battle of Navarino.
Source:Wikipedia Link
1832 Jul 21

Establishment of the Kingdom of Greece

London, UK
The Entry of King Othon of Greece in Athens

The London Conference of 1832 was an international conference convened to establish a stable government in Greece. Negotiations between the three Great Powers (Britain, France and Russia) resulted in the establishment of the Kingdom of Greece under a Bavarian Prince. The decisions were ratified in the Treaty of Constantinople later that Year. The treaty followed the Akkerman Convention which had previously recognized another territorial change in the Balkans, the suzerainty of Principality of Serbia.
Source:Wikipedia Link
1833 Jan 1

The consequences of the Greek revolution were somewhat ambiguous in the immediate aftermath. An independent Greek state had been established, but with Britain, Russia and France having significant influence in Greek politics, an imported Bavarian dynast as ruler, and a mercenary army. The country had been ravaged by ten years of fighting and was full of displaced refugees and empty Turkish estates, necessitating a series of land reforms over several decades.

As a people, the Greeks no longer provided the princes for the Danubian Principalities, and were regarded within the Ottoman Empire, especially by the Muslim population, as traitors. In Constantinople and the rest of the Ottoman Empire where Greek banking and merchant presence had been dominant, Armenians mostly replaced Greeks in banking, and Jewish merchants gained importance.

In the long-term historical perspective, this marked a seminal event in the collapse of the Ottoman Empire, despite the small size and the impoverishment of the new Greek state. For the first time, a Christian subject people had achieved independence from Ottoman rule and established a fully independent state, recognized by Europe.

The newly established Greek state would become a catalyst for further expansion and, over the course of a century, parts of Macedonia, Crete, Epirus, many Aegean Islands, the Ionian Islands and other Greek-speaking territories would unite with the new Greek state. 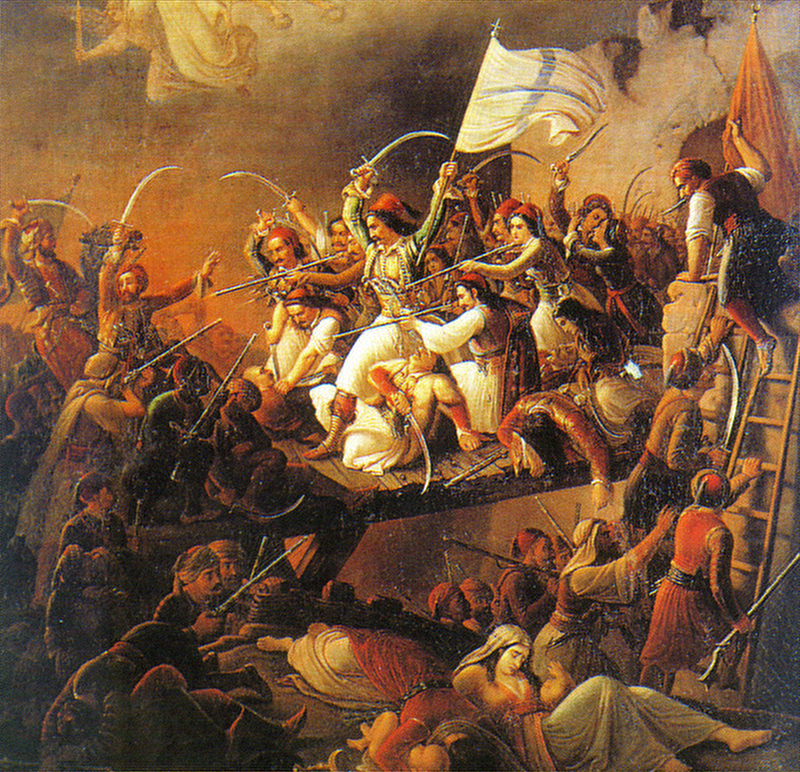 How well do you know the Greek War of Independence?
Play Timelines