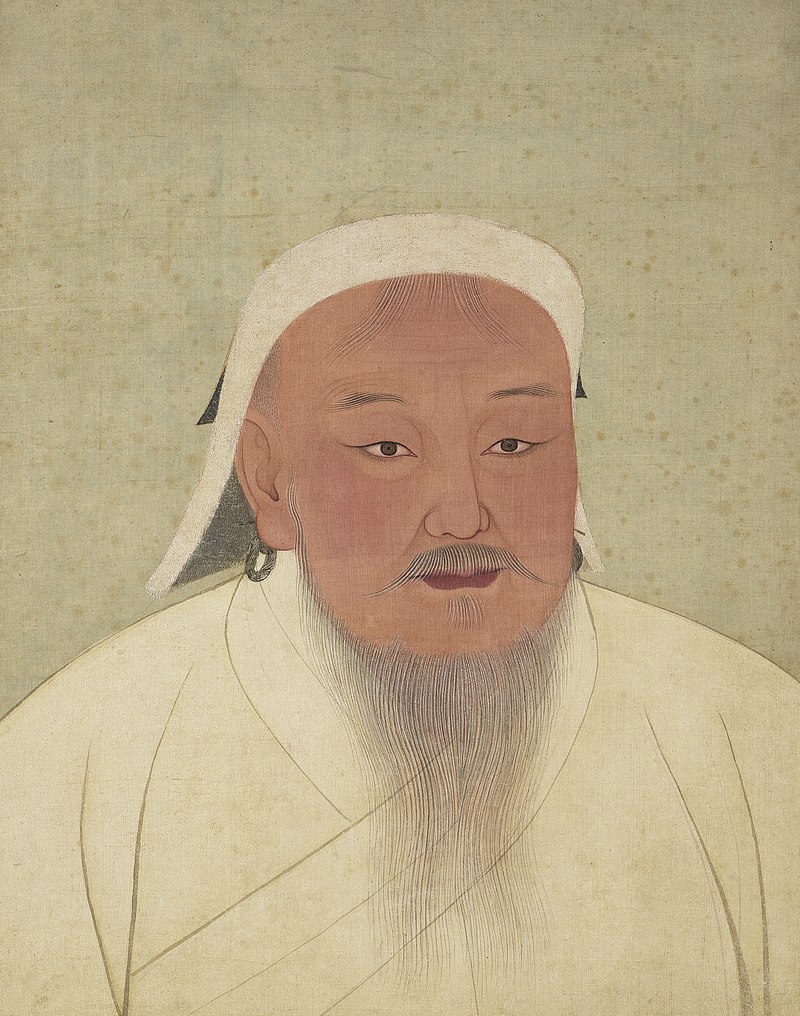 Genghis Khan, was the founder and first Great Khan of the Mongol Empire, which became the largest contiguous empire in history after his death. He came to power by uniting many of the nomadic tribes of Northeast Asia.

Temüjin is born on the steppes (grasslands) of what is now Mongolia. He is the son of Yesügei, a member of the royal Borjigin clan of the nomadic Mongol people."
More details

A band of Tatars, another nomadic people, poisons Temüjin’s father. With Yesügei dead, the rest of Temüjin’s clan abandon him, his mother, and his siblings. A rival clan later captures Temüjin and holds him captive, forcing him to wear a wooden collar, but Temüjin eventually escapes.

War against the Tatars

Temüjin allies himself with the Khongirad to wage war on the Tatars.

Jamukha assembled 30,000 men and moved in an arc from the north to flank Temüjin's position. The two forces were evenly matched but Temüjin's side suffered slightly worse than Jamukha, and was forced to retreat to a defensible pass called Jerene near the Onon River. Despite Jamukha's victory, his harsh treatment of captives disgusted his allies so much that they defected to Temüjin, bringing with them 10,000 men. With less than 20,000 men at his side, Jamukha was no longer able to challenge Temüjin on the upper Kherlen River, and retreated further east
More details

Khalakhaljid Sands was one of many battles which Genghis Khan fought to try to unify the tribes of Mongolia under one banner. The battle was against Jamukha and his father's anda Toghrul Khan who had plotted against Temujin. Genghis lost this battle, and his son Ögedei was missing and wounded on the battlefield. The Secret History of the Mongols states that Genghis's adopted brother and companion Borokhula rescued Ögedei after the battle. Toghrul's son Senggüm was jealous because of Temujin was more respected than him by Toghrul. So he demanded Toghrul to bring men. Jamukha plotted with three of Temujin's uncles and Senggüm to take down Temujin's mission to reunite the old nomadic empire.
More details

Using his rival Nilga Senggum's temporary refuge in Western Xia as a pretext, Temujin launched a raid against the state in 1205 in the Edsin region. The Mongols plundered border settlements and one local Western Xia noble accepted Mongol supremacy.

Genghis Khan of the Mongol Empire

Kokochu, also known as Teb Tengri, chief shaman of the Mongols, bestows upon Temüjin the title of Genghis Khan, "Universal Ruler" of the Mongol Empire, at the kurultai of Burkhan Khaldun, sacred mountain of the Mongols.

In 1209, the Genghis undertook a larger campaign to secure the submission of Western Xia. After defeating a Tangut army led by Kao Liang-Hui outside Wuhai, Genghis captured the city and pushed up along the Yellow River, defeated several cities, and besieged the capital, Yinchuan, which held a well-fortified garrison of 150,000. Emperor Li Anquan, still threatened by the Mongols and receiving no relief from the Jin dynasty, agreed to submit to Mongol rule, and demonstrated his loyalty by giving a daughter, Chaka, in marriage to Genghis and paying a tribute of camels, falcons, and textiles.[

The Battle of Yehuling, literally the Battle of Wild Fox Ridge, was a major decisive battle fought between the Mongol Empire and Jurchen-led Jin dynasty during the first stage of the Mongol conquest of the Jin dynasty. The battle was fought between August and October 1211 at Yehuling (野狐嶺; lit. "Wild Fox Ridge"), which is located northwest of present-day Wanquan District, Zhangjiakou, Hebei Province. The battle concluded with a total Mongol victory that allowed them to overrun and conquer the northern part of the Jin. It also hastened the weakening and decline of the Jin dynasty.
More details

The siege of Zhongdu (modern Beijing), as depicted in the Persian Jami' al-tawarikh by Rashid-al-Din Hamadani

The Battle of Zhongdu (present-day Beijing) was a battle in 1215 between the Mongols and the Jurchen Jin dynasty, which controlled northern China. The Mongols won and continued their conquest of China. The battle for Beijing was long and tiresome, but the Mongols proved to be more powerful as they finally took the city on 1 June 1215, massacring its inhabitants. This forced Jin Emperor Xuanzong to move his capital south to Kaifeng, and opened the Yellow River valley to further Mongol ravages. Kaifeng also fell to the Mongols after a siege in 1232.
More details

Mongol conquest of the Qara Khitai

In 1218, after requesting Muhammad II of Khwarazm not to aid Kuchlug, Genghis Khan dispatched general Jebe with two tumens (20,000 soldiers), along with the Uyghur Barchuk (who was Genghis Khan's son-in-law) and possibly also Arslan Khan, ruler of the Karluk city Qayaliq and another son-in-law of Genghis Khan, to deal with the Qara Khitai threat, while sending Subutai with another two tumens on a simultaneous campaign against the Merkits. The two armies traveled alongside each other through the Altai and Tarbagatai Mountains until arriving at Almaliq. At that point, Subutai turned southwest, destroying the Merkits and protecting Jebe's flank against any sudden attacks from Khwarazm. Jebe relieved Almaliq, then moved south of Lake Balkash into the lands of the Qara Khitai, where he besieged the capital of Balasagun. There, Jebe defeated an army of 30,000 troops and Kuchlug fled to Kashgar. Taking advantage of the unrest fomenting under Kuchlug's rule, Jebe gained support from the Muslim populace by announcing that Kuchlug's policy of religious persecution had ended. When Jebe's army arrived at Kashgar in 1217, the populace revolted and turned on Kuchlug, forcing him to flee for his life. Jebe pursued Kuchlug across the Pamir Mountains into Badakhshan in modern Afghanistan. According to Ata-Malik Juvayni, a group of hunters caught Kuchlug and handed him over to the Mongols, who promptly beheaded him. The Mongols fully conquered the former territories of the Qara-Khitans in 1220.
More details

With the death of Kuchlug, the Mongol Empire secured control over the Qara Khitai. The Mongols now had a firm outpost in Central Asia directly bordering the Khwarazm Empire. Relations with the Khwarazms would quickly break down, leading to the Mongol invasion of that territory. It was not originally the intention of the Mongol Empire to invade the Khwarezmid Empire, and according to Juvaini, Genghis Khan had originally sent the ruler of the Khwarezmid Empire, Sultan Muhammad Aladdin, a message seeking trade and greeted him as his neighbor. However, the Governor of Otrar refused to receive the mission and had all 450 of them killed, with permission from the Sultan. Upon hearing of this atrocity months later, Genghis Khan flew into a rage and used the incident as a pretext for invasion. The Mongol invasion of Central Asia however would entail the utter destruction of the Khwarezmid Empire along with the massacre of much of the civilian population of the region. According to Juvaini, the Mongols ordered only one round of slaughter in Khwarezm and Transoxiana, but systematically exterminated a particularly large portion of the people of the cities of Khorasan. This earned the Mongols a reputation for bloodthirsty ferocity that would mark the remainder of their campaigns.
More details

Following the Mongol invasion of Khwarezm, Jalal ad-Din was forced to flee towards the Hindukush, where he began to muster additional troops to face the Mongols. With the arrival of over 30,000 Afghan warriors. His strength reportedly was between 30,000 and 60,000 men. Genghis Khan sent his chief justice Shikhikhutag to hunt down Jalal al-Din, but only gave the rookie general 30,000 troops. Shikhikhutag was overconfident after the continuous Mongol successes, and he quickly found himself on the back foot against the much more numerous Khwarezmian force. The battle took place in a narrow valley, which was unsuitable for the Mongol cavalry. Jalal al-Din had mounted archers, whom he ordered to dismount and fire on the Mongols. Because of the narrow terrain, the Mongols could not use their normal tactics. To deceive the Khwarezmians, Shikhikhutag mounted straw warriors on spare remounts, which may have spared him from a killing stroke, but he was still driven off in defeat losing over half his army.
More details

Battle of the Indus

Jalal ad-Din positioned his army of at least thirty thousand men in a defensive stance against the Mongols, placing one flank against the mountains while his other flank was covered by a river bend.The initial Mongol charge that opened the battle was beaten back. Jalal al-Din counterattacked, and nearly breached the center of the Mongol army. Genghis then sent a contingent of 10,000 men around the mountain to flank Jalal ad-Din's army. With his army attacked from two directions and collapsing into chaos, Jalal al-Din fled across the Indus river.
More details

The Mongols defeat the Kingdom of Georgia

The Mongols made their first appearance in the Georgian possessions when this latter kingdom was still in its zenith, dominating most of the Caucasus. First contact occurred early in the fall of 1220, when approximately 20,000 Mongols led by Subutai and Jebe pursued the ousted Shah Muhammad II of the Khwarazmian dynasty to the Caspian Sea. With the consent of Genghis Khan, the two Mongol generals proceeded west on a reconnaissance mission. They thrust into Armenia, then under Georgian authority, and defeated some 10,000 Georgians and Armenians commanded by King George IV "Lasha" of Georgia and his atabeg (tutor) and amirspasalar (commander-in-chief) Ivane Mkhargrdzeli at the Battle of Khunan on the Kotman River. George was severely wounded in the chest.
More details

The Mongols destroy the Tangut Dynasty of Xi Xia.

Though subjugated under the Mongols, the Tangut Dynasty of Xi Xia refuses to lend military support to the campaign against the Khwarzin Dynasty, instead going into open rebellion. After defeating the Khwarzins, Genghis Khan immediately takes his army back to Xi Xia and begins a string of victories over the Tanguts. After victory, he orders the execution of the Tanguts, thereby putting an end to their dynasty. Genghis ordered his generals to systematically destroy cities and garrisons as they went.
More details

The exact cause of his death remains a mystery, and is variously attributed to being killed in action against the Western Xia, illness, falling from his horse, or wounds sustained in hunting or battle. According to The Secret History of the Mongols, Genghis Khan fell from his horse while hunting and died because of the injury. He was already old and tired from his journeys. After he died, his body was returned to Mongolia and presumably to his birthplace in Khentii Aimag, where many assume he is buried somewhere close to the Onon River and the Burkhan Khaldun mountain (part of the Kentii mountain range). According to legend, the funeral escort killed anyone and anything across their path to conceal where he was finally buried.
More details