Zhao Zheng of Qin was born

Qin's campaign against the Yue tribes

Qin's campaign against the Xiongnu

Construction begins on the Lingqu Canal 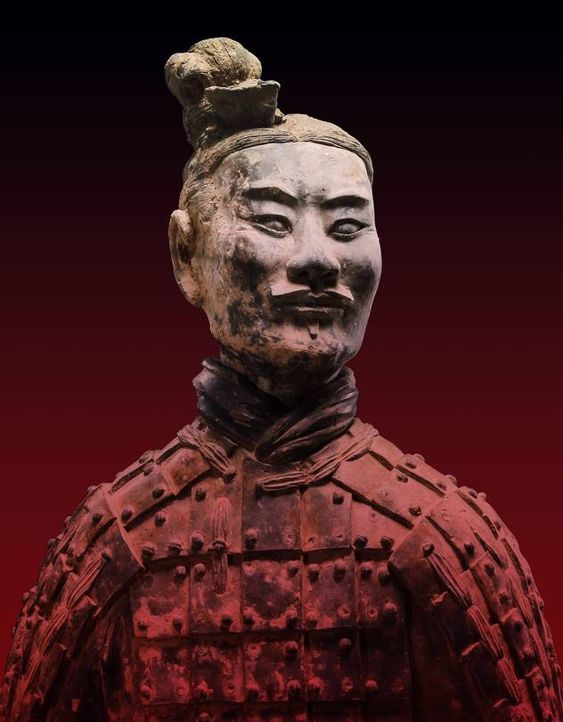 The Qin dynasty or Ch'in dynasty was the first dynasty of Imperial China, lasting from 221 to 206 BC. Named for its heartland in Qin state (modern Gansu and Shaanxi), the dynasty was founded by Qin Shi Huang, the First Emperor of Qin. The strength of the Qin state was greatly increased by the Legalist reforms of Shang Yang in the fourth century BC, during the Warring States period. In the mid and late third century BC, the Qin state carried out a series of swift conquests, first ending the powerless Zhou dynasty and eventually conquering the other six of the Seven Warring States. Its 15 years was the shortest major dynasty in Chinese history, consisting of only two emperors, but inaugurated an imperial system that lasted from 221 BC, with interruption and adaptation, until 1912 AD.

In the 9th century BC, Feizi, a supposed descendant of the ancient political advisor Gao Yao, was granted rule over Qin City. The modern city of Tianshui stands where this city once was. During the rule of King Xiao of Zhou, the eighth king of the Zhou dynasty, this area became known as the state of Qin. In 897 BC, under the Gonghe Regency, the area became a dependency allotted for the purpose of raising and breeding horses. One of Feizi's descendants, Duke Zhuang, became favoured by King Ping of Zhou, the 13th king in that line. As a reward, Zhuang's son, Duke Xiang, was sent eastward as the leader of a war expedition, during which he formally established the Qin. The state of Qin first began a military expedition into central China in 672 BC, though it did not engage in any serious incursions due to the threat from neighbouring tribesmen. By the dawn of the fourth century BC, however, the neighbouring tribes had all been either subdued or conquered, and the stage was set for the rise of Qin expansionism.

Zhao Zheng of Qin was born 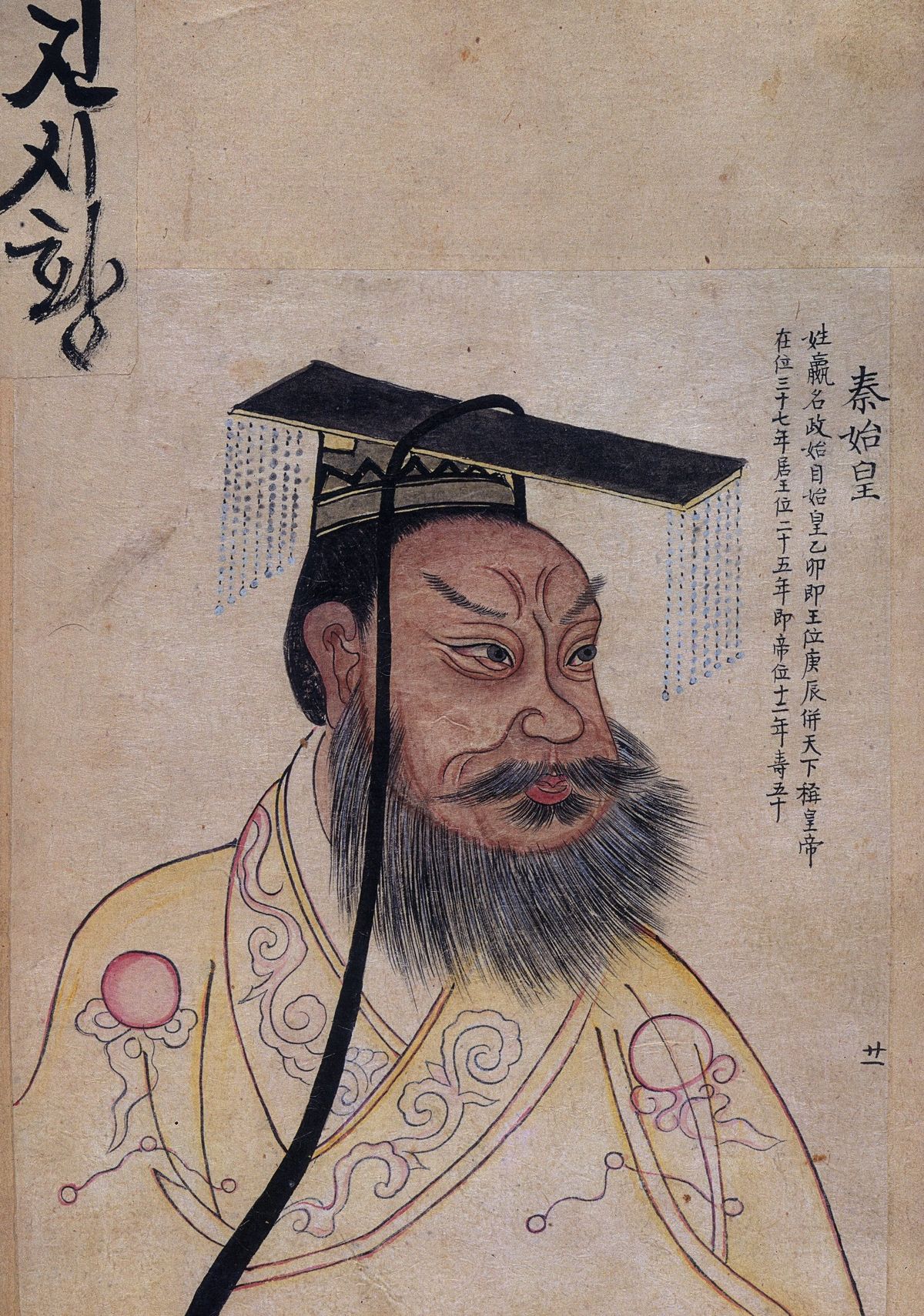 He was given the name Zhao Zheng, (personal name Ying Zheng). The name name Zheng (正) came from his month of birth Zhengyue, the first month of the Chinese lunar calendar;. The clan name of Zhao came from his father's lineage and was unrelated to either his mother's name or the location of his birth. (Song Zhong says that his birtheventDate, significantly, was on the first day of Zhengyue.
More
246 BCE May 7 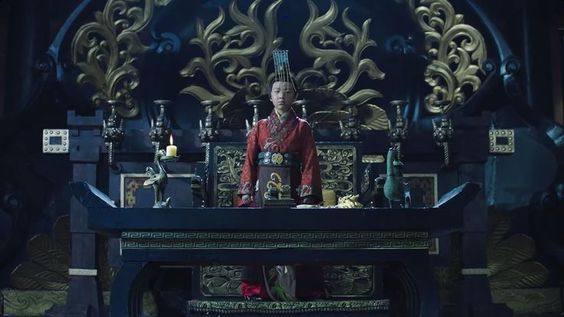 In 246 BC, when King Zhuangxiang died after a short reign of just three years, he was succeeded on the throne by his 13-eventYear-old son. At the time, Zhao Zheng was still young, so Lü Buwei acted as the regent prime minister of the State of Qin, which was still waging war against the other six states. Nine years later, in 235 BC, Zhao Zheng assumed full power after Lü Buwei was banished for his involvement in a scandal with Queen Dowager Zhao. Zhao Chengjiao, the Lord Chang'an (长安君), was Zhao Zheng's legitimate half-brother, by the same father but from a different mother. After Zhao Zheng inherited the throne, Chengjiao rebelled at Tunliu and surrendered to the state of Zhao. Chengjiao's remaining retainers and families were executed by Zhao Zheng.
More
230 BCE Jan 1 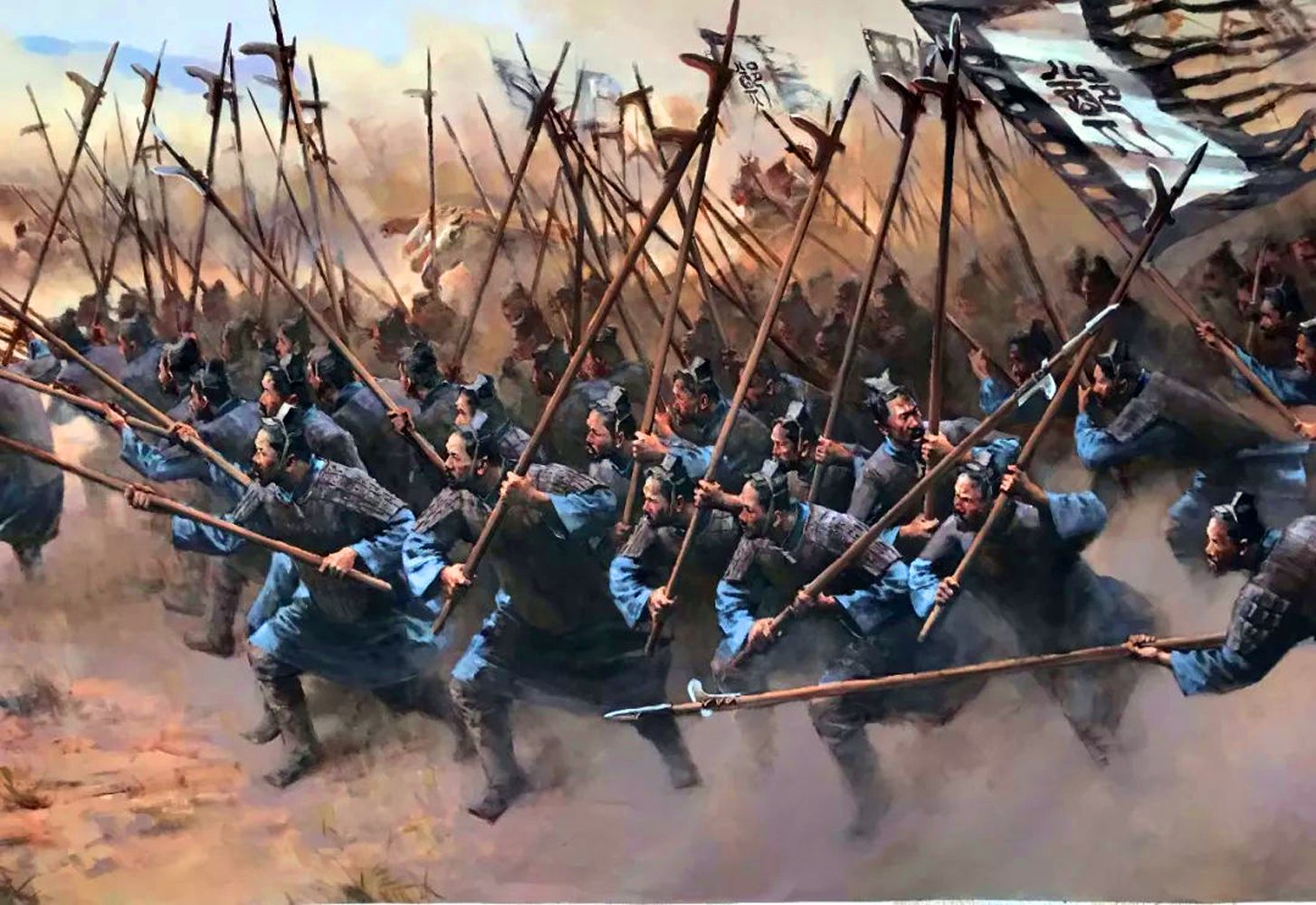 During the Warring States period, Qin gradually gains power through calculated attacks. When the final campaign to unify China begins around 230 BCE, Qin controls one-third of all the land under cultivation in China and one-third of China's total population.
More
221 BCE Jan 1

Qin's campaign against the Yue tribes 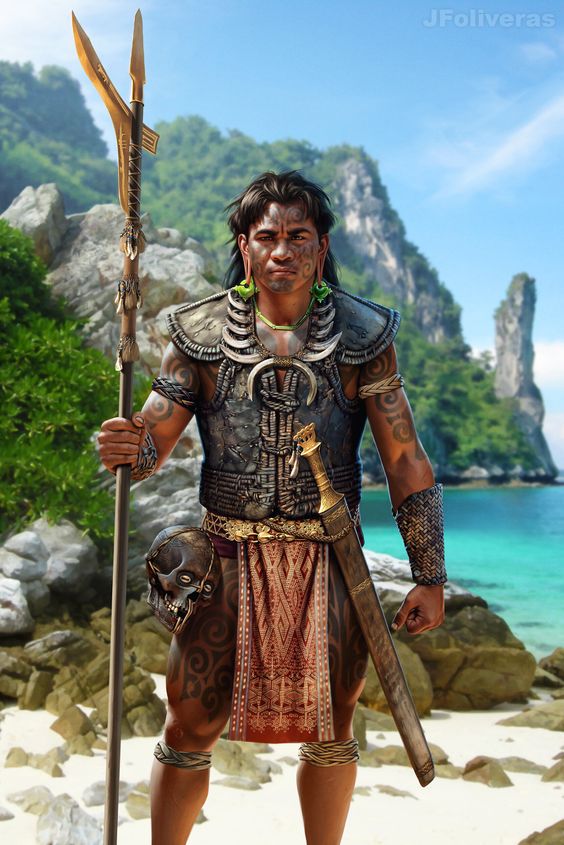 As trade was an important source of wealth for the Yue tribes of coastal China, the region south of the Yangtze River attracted the attention of Emperor Qin Shi Huang, and he undertook a series of military campaigns to conquer it. Lured by its temperate climate, fertile fields, maritime trade routes, relative security from warring factions to the west and northwest, and access to luxury tropical products from Southeast Asia, the emperor sent armies to conquer the Yue kingdoms in 221 BC. Military expeditions against the region were dispatched between 221 and 214 BC. It would take five successive military excursions before the Qin finally defeated the Yue in 214 BC. 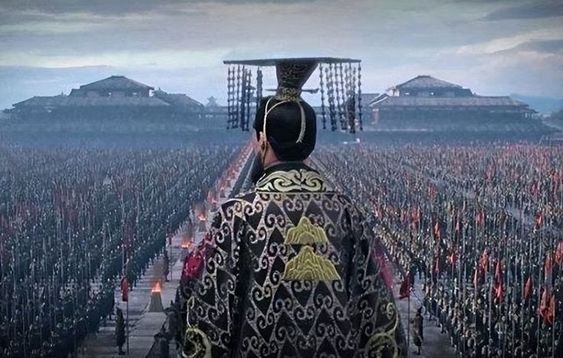 Zhao Zheng, King of Qin, emerges victorious from the Warring States period in China and unifies the country. He begins the Qin dynasty and proclaims himself the "First Emperor" (始皇帝, Shǐ Huángdì), no longer a king in the old sense and now far surpassing the achievements of the old Zhou Dynasty rulers.
218 BCE Jan 1 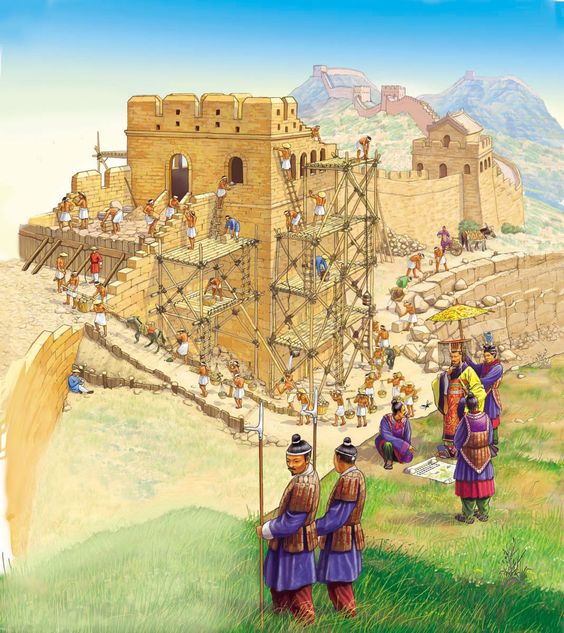 Emperor Shi Huangdi developed plans to fortify his northern border, to protect against nomadic invasions. The result was the initial construction of what later became the Great Wall of China, which was built by joining and strengthening the walls made by the feudal lords, which would be expanded and rebuilt multiple times by later dynasties, also in response to threats from the north.

Qin's campaign against the Xiongnu 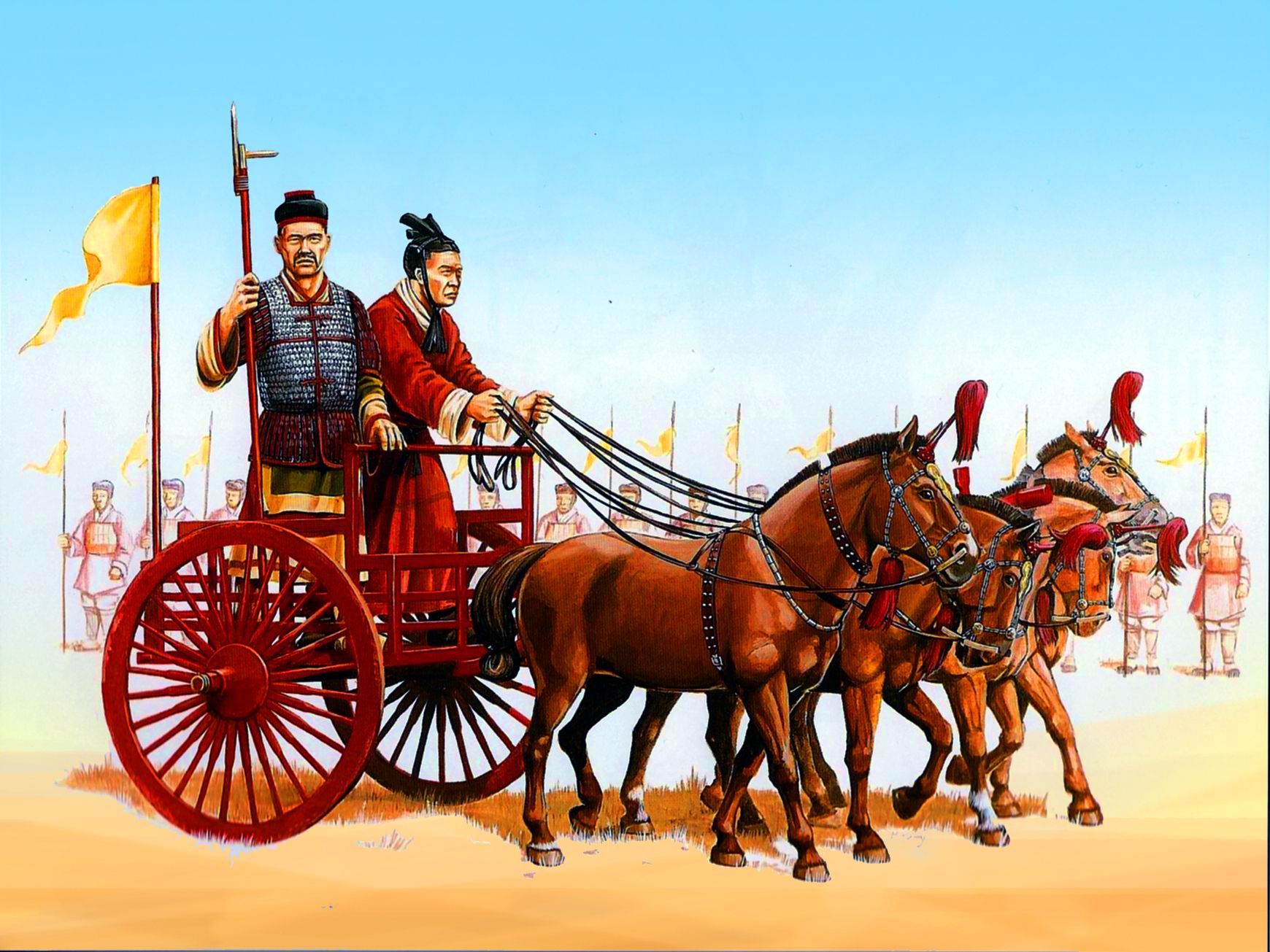 In 215 BC, Qin Shi Huangdi ordered General Meng Tian to set out against the Xiongnu tribes in the Ordos region, and establish a frontier region at the loop of the Yellow River. Believing that the Xiongnu were a possible threat, the emperor launched a preemptive strike against the Xiongnu with the intention to expand his empire.

Construction begins on the Lingqu Canal 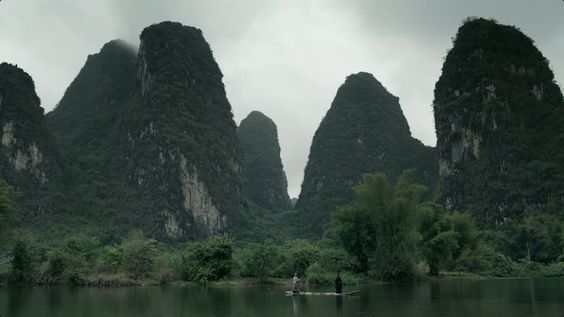 During his campaigns to the south, Shi Huangdi commences construction on the Lingqu Canal, which is used heavily for supplying and reinforcing troops during secondary campaigns. Shi Lu was assigned by Emperor Shi Huangdi to build a canal for grain transport. The project was completed in 214 B.C., which is known as the Lingqu Canal today. It has directly secured the South China with military significance. The Canal has been in service for over 2000 years as the major water transport route between Lingnan (today’s Guangdong and Guangxi) and Central China till completion of the Yuehan Railway and Xianggui Railway in modern times. Many have mistaken this for the Grand Canal.
More
214 BCE Jan 1 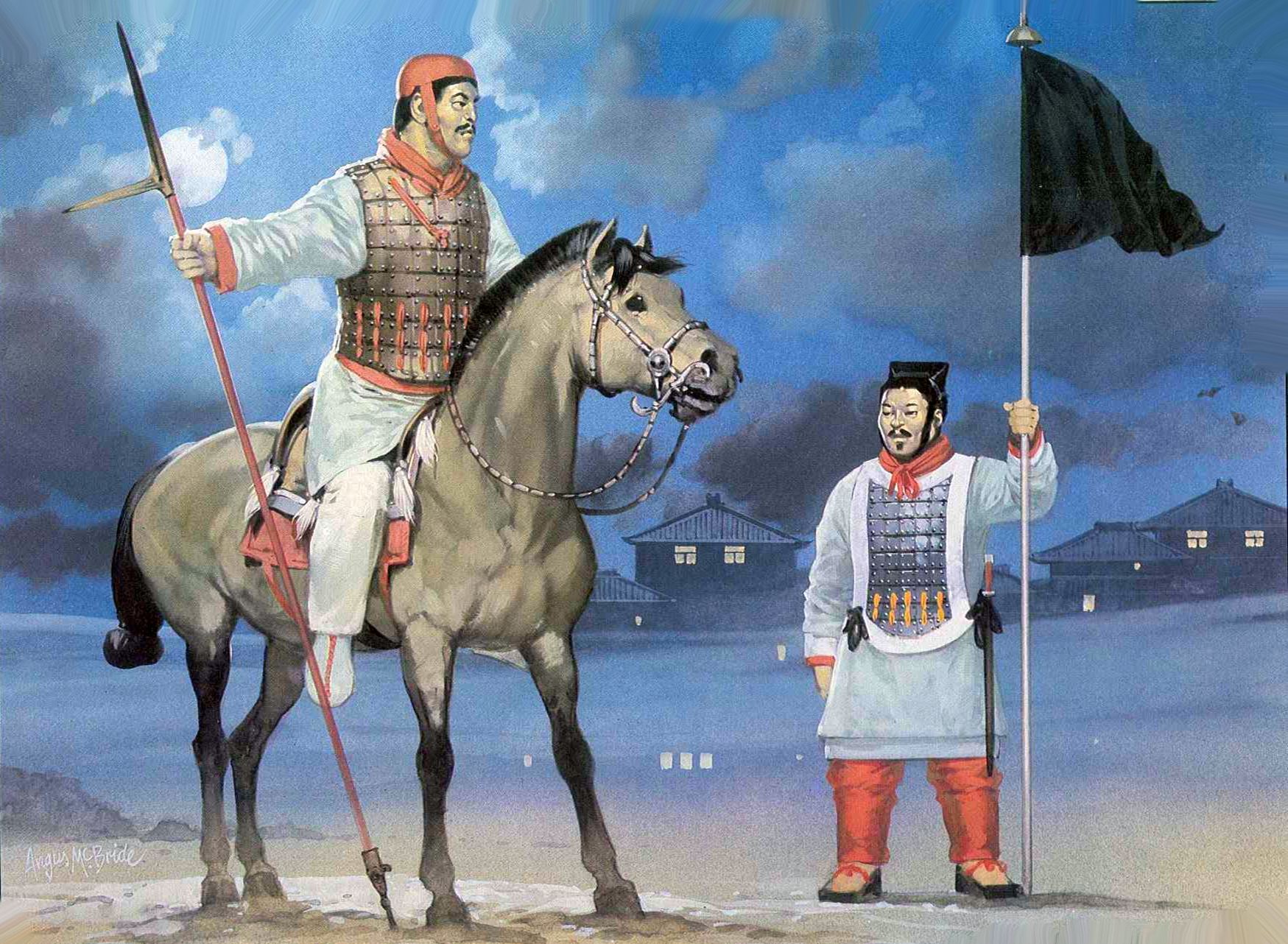 In 214 BC, Shi Huangdi secured his boundaries to the north with a fraction (100,000 men) of his large army, and sent the majority (500,000 men) of his army south to conquer the territory of the southern tribes. Prior to the events leading to Qin dominance over China, they had gained possession of much of Sichuan to the southwest. The Qin army was unfamiliar with the jungle terrain, and it was defeated by the southern tribes' guerrilla warfare tactics with over 100,000 men lost. However, in the defeat Qin was successful in building a canal to the south, which they used heavily for supplying and reinforcing their troops during their second attack to the south. Building on these gains, the Qin armies conquered the coastal lands surrounding Guangzhou, and took the provinces of Fuzhou and Guilin. They struck as far south as Hanoi. After these victories in the south, Qin Shi Huang moved over 100,000 prisoners and exiles to colonize the newly conquered area. In terms of extending the boundaries of his empire, the First Emperor was extremely successful in the south. 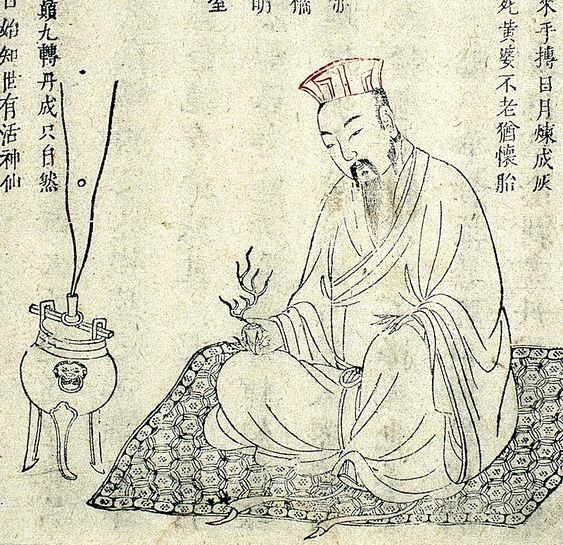 Following several assassination attempts, Shi Huangdi becomes increasingly obsessed with death and the concept of eternal life. Evidence suggests he may have begun searching for an elixir of immortality. 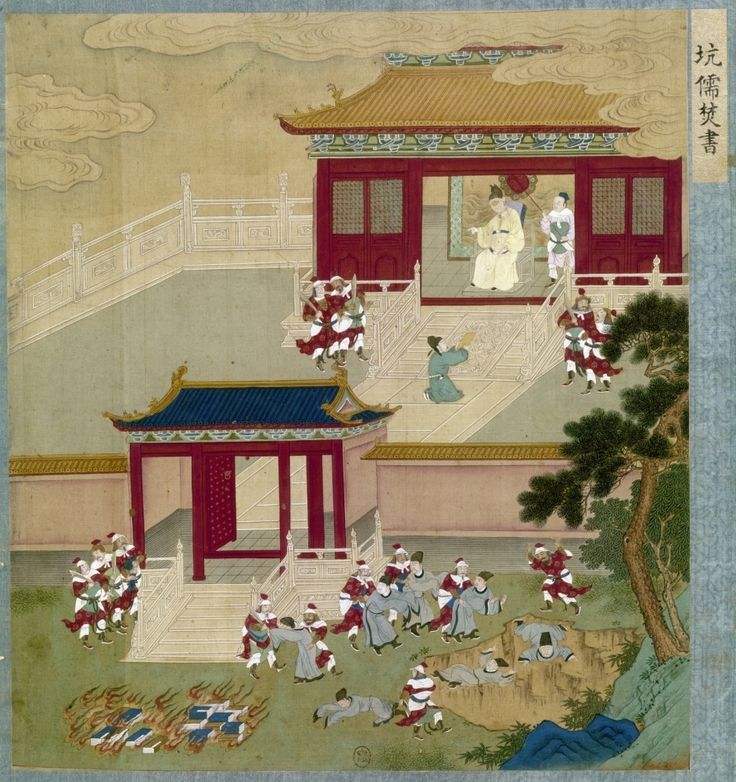 As part of his Legalist political beliefs, Shi Huangdi requires that all books that do not support Legalism be destroyed. He orders these books to be burned, and only texts on farming, medicine, and predictions are saved. On the advice of his chief advisor Li Siu, Shi Huangdi orders 420 scholars to be executed by live burial, since many scholars opposed his book burnings. In 2010, Li Kaiyuan, a researcher in the field of history of Qin Dynasty and Han Dynasty, published an article titled The Truth or Fiction of the Burning the Books and Executing the Ru Scholars: A Half-Faked History, which raised four doubts about "executing the ru scholars" and argued that Sima Qian had misused historical materials. Li believes that the burning the books and executing the ru scholars is a pseudo-history that is cleverly synthesized with real "burning the books" and false "executing the ru scholars".

The expedition in search of the medicine for immortality.

Xu Fu returns from his voyage to find the elixir of life and blames his failure on sea monsters so the emperor goes fishing. When Qin Shi Huang questioned him, Xu Fu claimed there was a giant sea creature blocking the path, and asked for archers to kill the creature. Qin Shi Huang agreed, and sent archers to kill a giant fish. Xu then set sail again, but he never returned from this trip.
More
210 BCE Jan 1 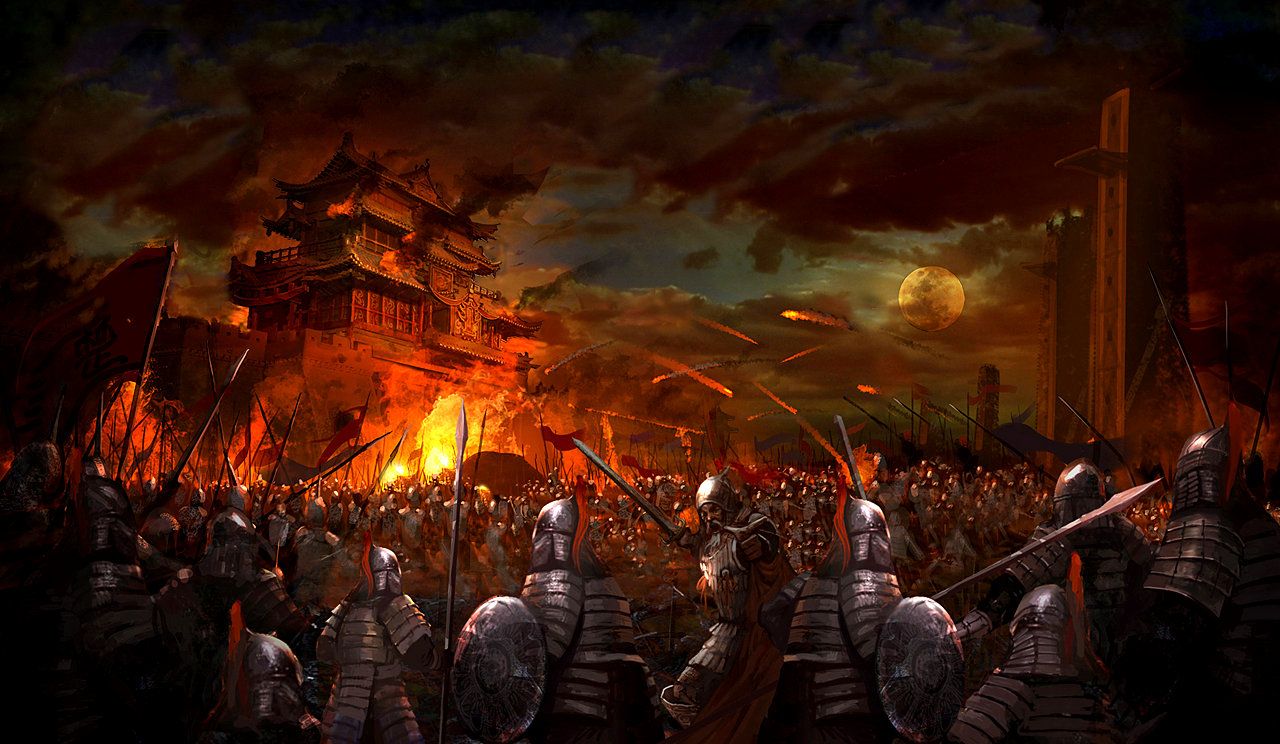 Prime minister Li Siu contrives to place Hu Hai(named Qin Er Shi), the weak second son of Shi Huangdi, on the throne. Qin Er Shi was, indeed, inept and pliable. He executed many ministers and imperial princes, continued massive building projects (one of his most extravagant projects was lacquering the city walls), enlarged the army, increased taxes, and arrested messengers who brought him bad news. As a result, men from all over China revolted, attacking officials, raising armies, and declaring themselves kings of seized territories.
More
210 BCE Sep 10 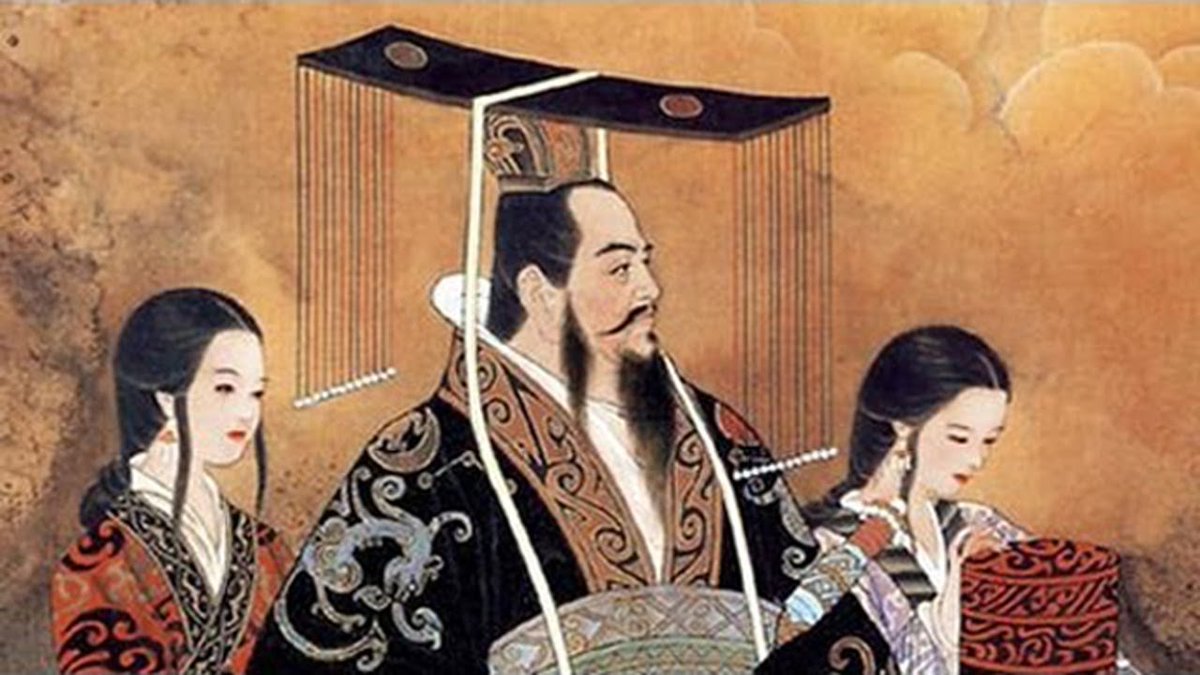 He died in 210 BC, while on a trip to the far eastern reaches of his empire in an attempt to procure an elixir of immortality from Taoist magicians, who claimed the elixir was stuck on an island guarded by a sea monster. The chief eunuch, Zhao Gao, and the prime minister, Li Si, hid the news of his death upon their return until they were able to alter his will to place on the throne the dead emperor's most pliable son, Huhai, who took the name of Qin Er Shi

Qin Shi Huang instigated the construction of the Terracotta Army as soon as he assumed the Qin state throne in 246 BC, though most decisions were made by officials as he was only 13. Over 700,000 laborers worked around the clock for 36 years on the Terracotta Army and the tomb complex.
More
207 BCE Oct 1

Qin Er Shi reigned only for three years and was forced to commit suicide eventually by his most trusted minister Zhao Gao at the age of 24. Qin Er Shi was condemned by the Eunuch Chancellor Zhao Gao after his death and was denied a royal burial. He was buried in today's Xi'an, near the Wild Goose Pagoda. Compared to his father, his tomb is much less elaborate and does not have a terracotta army. Qin Er Shi did not have a temple name.
206 BCE Jan 1 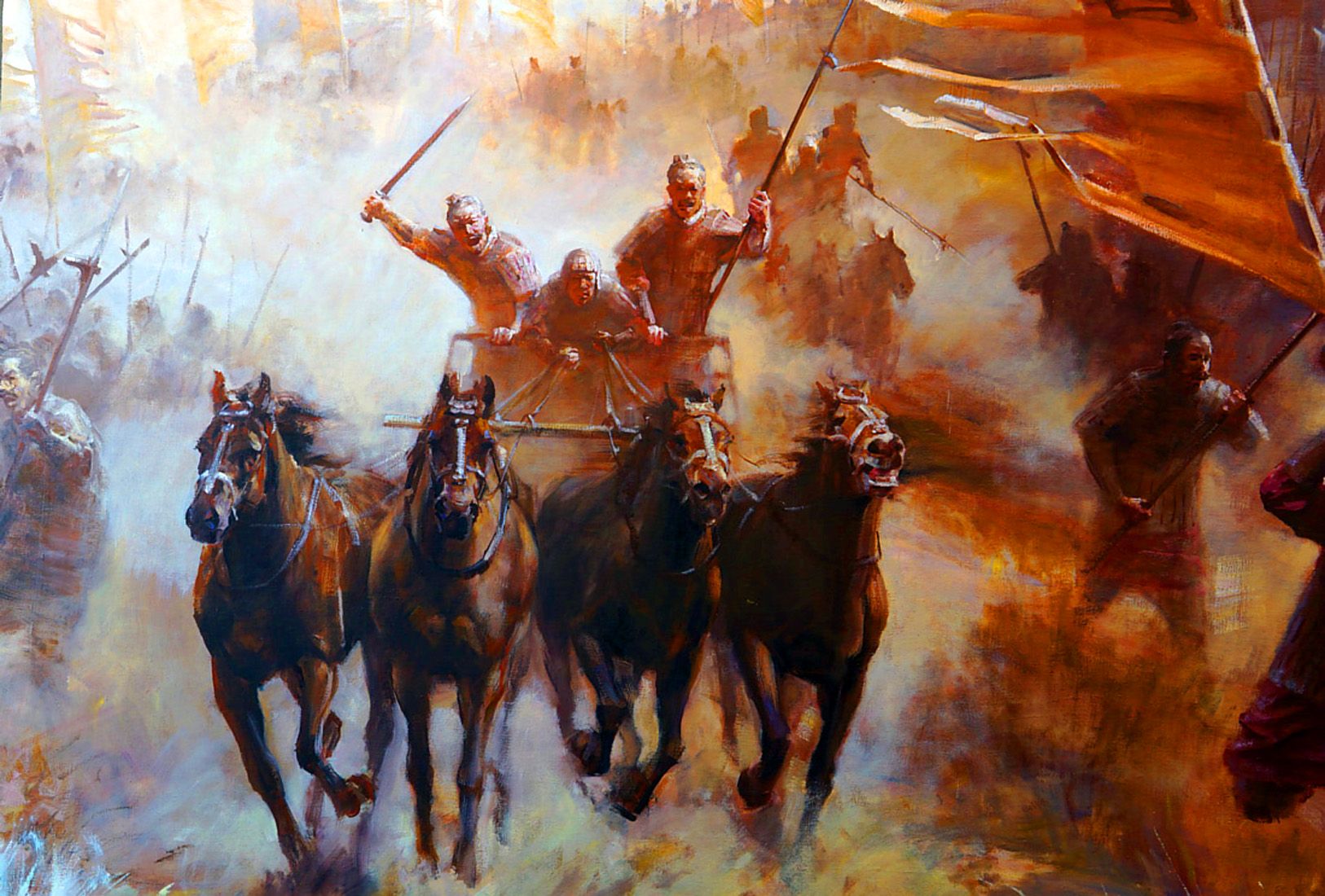 Following Shi Huangdi's death, the Qin government can no longer keep China unified. Rebel forces, each claiming the Mandate of Heaven, form across the country. Qin authority is finally overthrown in the capital of Xianyang in 206 BCE, and a series of battles for supreme authority commences.

The Qin sought to create a state unified by structured centralized political power and a large military supported by a stable economy. The central government moved to undercut aristocrats and landowners to gain direct administrative control over the peasantry, who comprised the overwhelming majority of the population and labour force. This allowed ambitious projects involving three hundred thousand peasants and convicts, such as connecting walls along the northern border, eventually developing into the Great Wall of China, and a massive new national road system, as well as the city-sized Mausoleum of the First Qin Emperor guarded by the life-sized Terracotta Army.

The Qin introduced a range of reforms such as standardized currency, weights, measures and a uniform system of writing, which aimed to unify the state and promote commerce. Additionally, its military used the most recent weaponry, transportation and tactics, though the government was heavy-handedly bureaucratic.

How well do you know the Qin dynasty?
Play Timelines 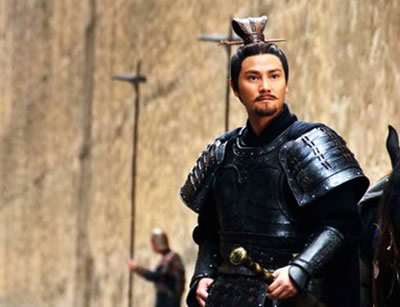 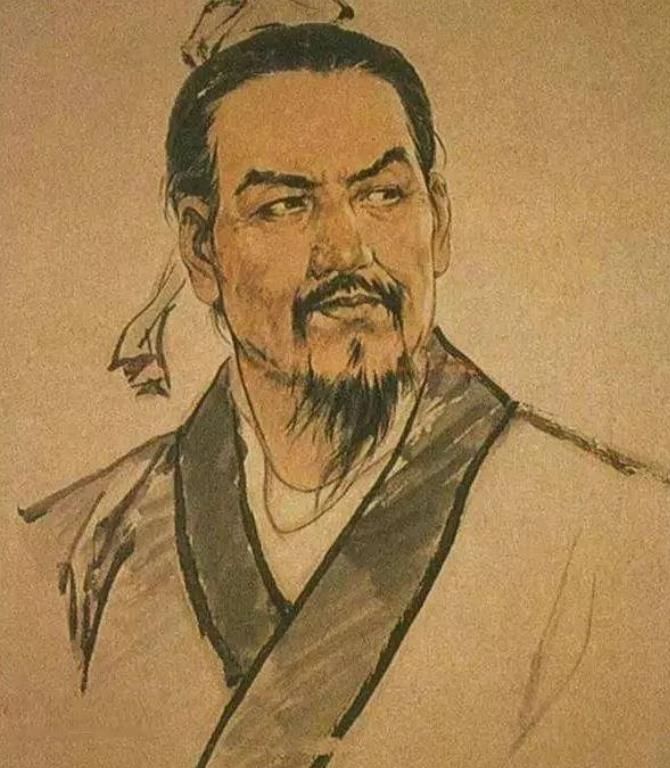 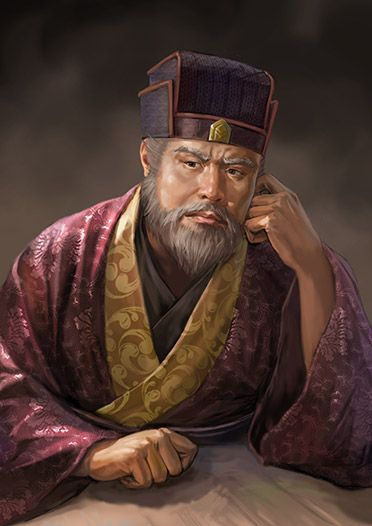 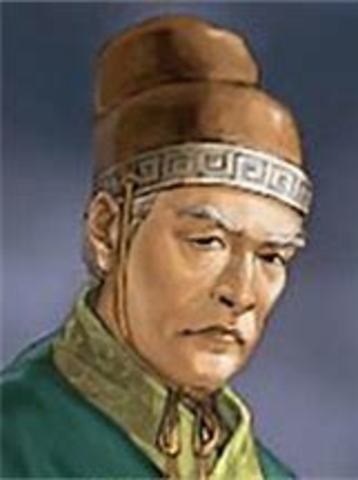