Yoshinaka driven out of Kyoto

The Genpei War was a national civil war between the Taira and Minamoto clans during the late-Heian period of Japan. It resulted in the downfall of the Taira and the establishment of the Kamakura shogunate under Minamoto no Yoritomo, who appointed himself as Shōgun in 1192, governing Japan as a military dictator from the eastern city of Kamakura. 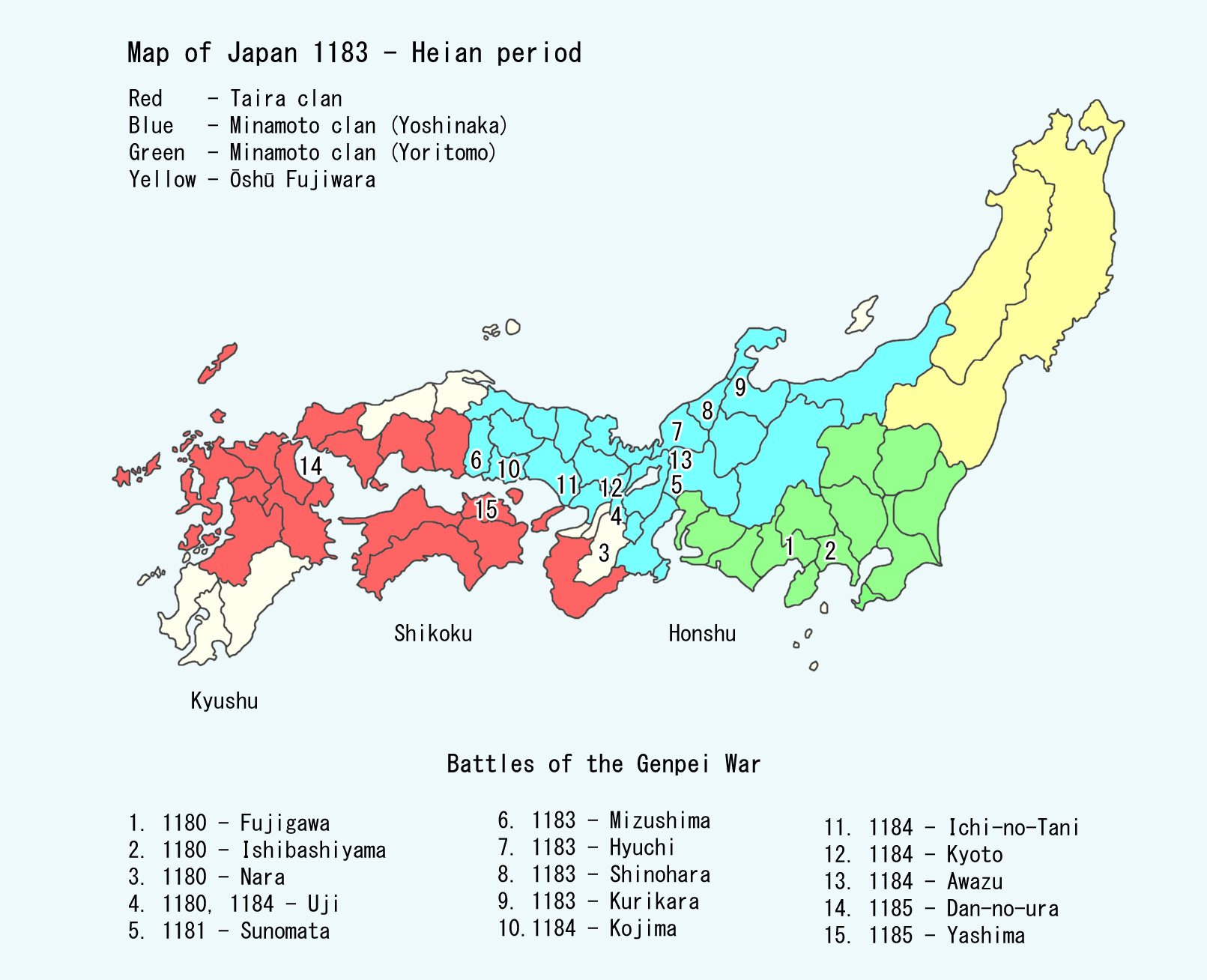 The Genpei War was the culmination of a decades-long conflict between between the Taira and Minamoto clans during the late-Heian period of Japan over dominance of the Imperial court, and by extension, control of Japan. In the Hōgen Rebellion and in the Heiji Rebellion of earlier decades, the Minamoto attempted to regain control from the Taira and failed. In 1180, Taira no Kiyomori put his grandson Antoku (then only 2 years of age) on the throne after the abdication of Emperor Takakura.

Emperor Go-Shirakawa's son Mochihito felt that he was being denied his rightful place on the throne and, with the help of Minamoto no Yorimasa, sent out a call to arms to the Minamoto clan and Buddhist monasteries in May.

Minister Kiyomori had issued a warrant for the arrest of Prince Mochihito who was forced to flee Kyoto and seek refuge in the monastery of Mii-dera. With thousands of Taira troops marching toward the monastery, the prince and 300 Minamoto warriors raced south toward Nara, where additional warrior monks would reinforce them. They hoped that monks from Nara would arrive to reinforce them before the Taira army did. Just in case, however, they tore the planks from the only bridge across the river to Byodo-in.
Source:Wikipedia Link
1180 Jun 20

Uji
Warrior monks tearing the planks of the bridge to slow down the Taira army.

At first light on June 20, the Taira army marched quietly up to Byodo-in, hidden by thick fog. The Minamoto suddenly heard the Taira war-cry and replied with their own. A fierce battle followed, with monks and samurai firing arrows through the mist at one another. Soldiers from the Taira's allies, the Ashikaga, forded the river and pressed the attack. Prince Mochihito tried to escape to Nara in the chaos, but the Taira caught up with him and executed him. The Nara monks marching toward Byodo-in heard that they were too late to help the Minamoto, and turned back. Minamoto Yorimasa, meanwhile, committed the first classical seppuku in history, writing a death poem on his war-fan, and then cutting open his own abdomen. The first battle of Uji is famous and important for having opened the Genpei War.
Source:Wikipedia Link
1180 Jun 21

It seemed that the Minamoto revolt and thus the Genpei War had come to an abrupt end. In vengeance, the Taira sacked and burned the monasteries that had offered aid to the Minamoto. The monks dug ditches in the roads, and built many forms of improvised defenses. They fought primarily with bow & arrow, and naginata, while the Taira were on horseback, giving them a great advantage. Despite the monks' superior numbers, and their strategic defenses. Thousands of monks were slaughtered nearly and every temple in the city were burned to the ground, including the Kōfuku-ji and Tōdai-ji. Only the Shōsōin survived.

It was at this point that Minamoto no Yoritomo took over leadership of the Minamoto clan and began traveling the country seeking to rendezvous with allies. Leaving Izu Province and heading for the Hakone Pass, he was defeated by the Taira in the battle of Ishibashiyama. Yoritomo escaped with his life, fleeing into the woods with Taira pursuers close behind. However he successfully made it to the provinces of Kai and Kōzuke, where the Takeda and other friendly families helped repel the Taira army.

Yoritomo made it to the town of Kamakura, which was solidly Minamoto territory. Using Kamakura as his headquarters, Minamoto no Yoritomo sent his counselor, Hōjō Tokimasa to convince the warlords Takeda of Kai and Nitta of Kotsuke to follow Yoritomo's command as he marched against the Taira. As Yoritomo continued through the region below Mount Fuji and into Suruga Province, he planned a rendezvous with the Takeda clan and other families of the provinces of Kai and Kōzuke to the north. These allies arrived at the rear of the Taira army in time to ensure a Minamoto victory.

Taira no Kiyomori died from illness in the spring of 1181 succeeded by his son Taira no Tomomori. At around the same time, Japan faced a series of droughts and floods that destroyed the rice and barley crops in 1180 and 1181. Famine and disease ravaged the countryside; an estimated 100,000 died.

Minamoto no Yukiie was defeated by a force led by Taira no Shigehira at the Battle of Sunomatagawa. However, the "Taira could not follow up their victory."

Fighting began again in July of 1182, and the Minamoto had a new champion called Yoshinaka, a rough-hewn cousin of Yoritomo's, but an excellent general. Yoshinaka entered the Genpei War raising an army and invading Echigo Province. He then defeated a Taira force sent to pacify the area.
Source:Wikipedia Link
1183 Apr 1

Yoritomo grew increasingly concerned about his cousin's ambitions. He sent an army to Shinano against Yoshinaka in the spring of 1183, but the two sides managed to negotiate a settlement rather than fighting one another. Yoshinaka then sent his son to Kamakura as a hostage. However, having been shamed, Yoshinaka was now determined to beat Yoritomo to Kyoto, defeat the Taira on his own, and take control of the Minamoto for himself.

The Taira had conscripted a huge army, marching forth on May 10, 1183, but were so disorganized that their food ran out just nine miles east of Kyoto. The officers ordered the conscripts to plunder food as they passed from their own provinces, which were just recovering from the famine. This prompted mass desertions. As they entered Minamoto territory, the Taira divided their army into two forces. Yoshinaka won by a clever strategy; under cover of nightfall his troops enveloped the main body of the Taira, demoralized them by a series of tactical surprises, and turned their confusion into a disastrous, headlong rout. This would prove the turning point in the Genpei War in the favour of the Minamoto clan.

The Taira retreated out of the capital, taking the child Emperor Antoku with them. Yoshinaka's army entered the capital with the cloistered Emperor Go-Shirakawa. Yoshinaka soon earned the hatred of the citizens of Kyoto, allowing his troops to pillage and rob people regardless of their political affiliation.
Source:Wikipedia Link
1183 Nov 17

Minamoto no Yoshinaka sent an army to cross the Inland Sea to Yashima, but they were caught by the Taira just offshore of Mizushima (水島), a small island of Bitchu Province, just off Honshū. The Taira tied their ships together, and placed planks across them to form a flat fighting surface. The battle began with archers loosing a rain of arrows upon the Minamoto boats; when the boats were close enough, daggers and swords were drawn, and the two sides engaged in hand-to-hand combat. Finally, the Taira, who had brought fully equipped horses on their ships, swam to the shore with their steeds, and routed the remaining Minamoto warriors.

Minamoto no Yukiie tries and fails to recoup the loss of the battle of Mizushima. The Taira forces split into five divisions, each attacking in succession, and wearing down Yukiie's men. Eventually surrounded, the Minamoto were forced to flee.

Yoshinaka once again sought to gain control of the Minamoto clan by planning an attack on Yoritomo, while simultaneously pursuing the Taira westward. The Taira were successful in beating off an attack by Yoshinaka's pursuing forces at the Battle of Mizushima. Yoshinaka conspired with Yukiie to seize the capital and the Emperor, possibly even establishing a new Court in the north. However, Yukiie revealed these plans to the Emperor, who communicated them to Yoritomo. Betrayed by Yukiie, Yoshinaka took command of Kyoto and, at the beginning of 1184, set fire to the Hōjūjidono, taking the Emperor into custody.
Source:Wikipedia Link
1184 Feb 19

Yoshinaka driven out of Kyoto

Minamoto no Yoshitsune arrived soon afterwards with his brother Noriyori and a considerable force, driving Yoshinaka from the city. This was an ironic reversal of the first Battle of the Uji, only four years earlier. Yoshinaka's wife, the famous female samurai Tomoe Gozen, is said to have escaped after taking a head as a trophy.

Minamoto no Yoshinaka made his final stand at Awazu, after fleeing from his cousins' armies. With night coming and with many enemy soldiers chasing him, he attempted to find an isolated spot to kill himself. However, the story says that his horse became trapped in a field of partly frozen mud and his enemies were able to approach him and kill him.

Only about 3000 Taira escaped to Yashima, while Tadanori was killed and Shigehira captured. Ichi-no-Tani is one of the most famous battles of the Genpei War, in large part due to the individual combats that occurred here. Benkei, probably the most famous of all warrior monks, fought alongside the Minamoto Yoshitsune here, and many of the Taira's most important and powerful warriors were present as well.
Source:Wikipedia Link
1185 Mar 22

Takamatsu, Kagawa, Japan
The Battle of Yashima in the Genpei War

As the united Minamoto forces left Kyoto, the Taira began consolidating their position at a number of sites in and around the Inland Sea, which was their ancestral home territory. After arriving in Tsubaki Bay, in Awa Province. Yoshitsune then advanced into Sanuki Province through the night reaching the bay with the Imperial Palace at Yashima, and the houses in Mure and Takamatsu. The Taira were expecting a naval attack, and so Yoshitsune lit bonfires on Shikoku, essentially in their rear, fooling the Taira into believing that a large force was approaching on land. They abandoned their palace, and took to their ships, along with Emperor Antoku and the imperial regalia. The majority of the Taira fleet escaped to Dan-no-ura. The Minamoto were victorious and many more clans threw their support for them and their supply of ships grew as well.
Source:Wikipedia Link
1185 Apr 25

The beginning of the battle consisted mainly of a long-range archery exchange, before the Taira took the initiative, using the tides to help them try to surround the enemy ships. They engaged the Minamoto, and the archery from a distance eventually gave way to hand-to-hand combat with swords and daggers after the crews of the ships boarded each other. However, the tide changed, and the advantage was given back to the Minamoto. One of the crucial factors that allowed the Minamoto to win the battle was that a Taira general, Taguchi Shigeyoshi, defected and attacked the Taira from the rear. He also revealed to the Minamoto which ship the six-year-old Emperor Antoku was on. Their archers turned their attention to the helmsmen and rowers of the Emperor's ship, as well as the rest of their enemy's fleet, sending their ships out of control. Many of the Taira saw the battle turn against them and committed suicide. 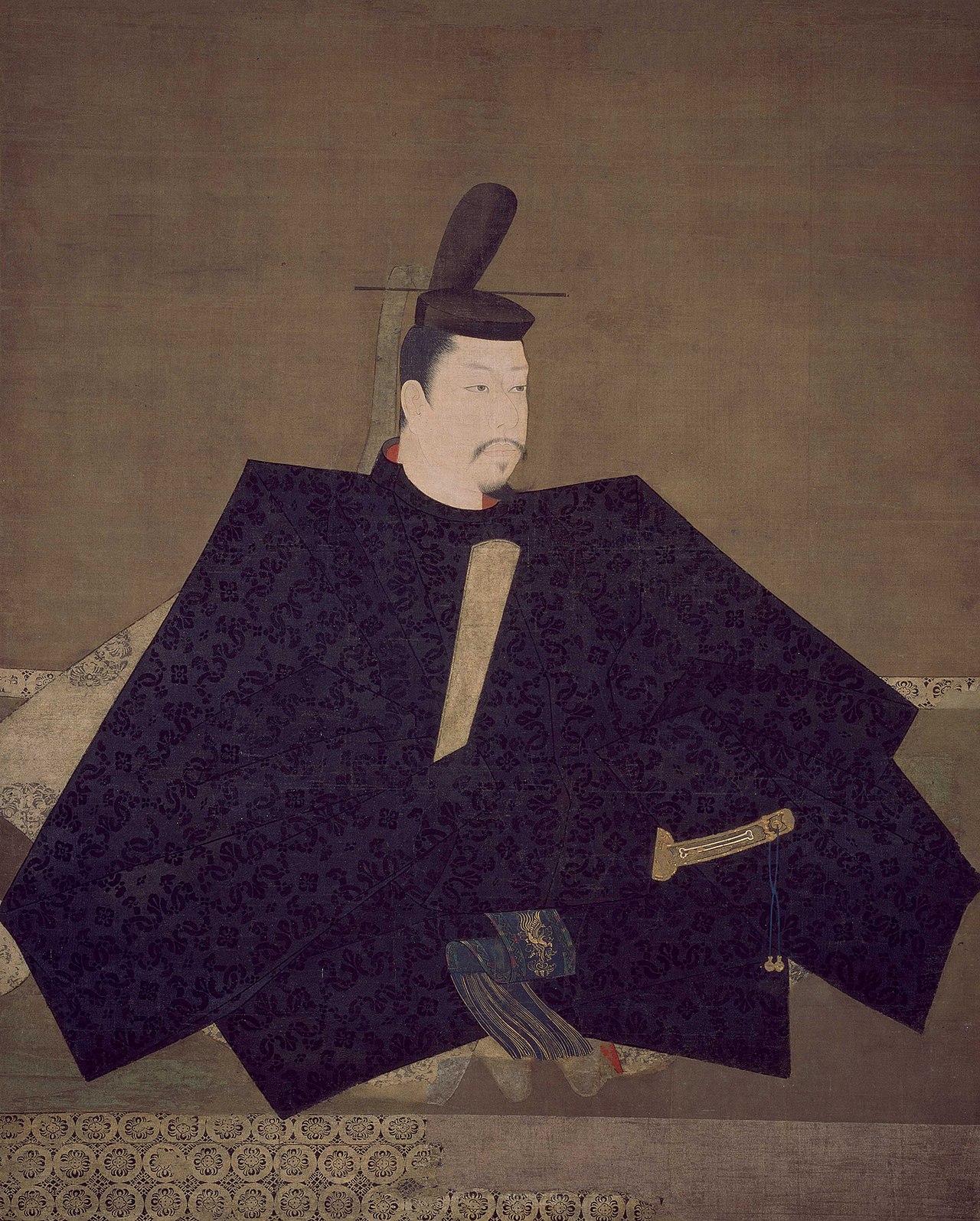 How well do you know the Genpei War?
Play Timelines