The French invasion of Russia, known in Russia as the Patriotic War of 1812 and in France as the Russian campaign, began on 24 June 1812 when Napoleon's Grande Armée crossed the Neman River in an attempt to engage and defeat the Russian Army.

From 1792 and onwards, France had been at a near constant state of war with the major European powers, a consequence of the French Revolution. Napoleon, who seized power in 1799 and ruled France as an autocrat, conducted several military campaigns which resulted in the creation of the first French empire. Starting in 1803, the Napoleonic Wars had proven Napoleon's abilities. He emerged victorious in the War of the Third Coalition (1803–1806, which dissolved the thousand year old Holy Roman Empire), the War of the Fourth Coalition (1806–1807), and the War of the Fifth Coalition (1809).

In 1807, Napoleon and Alexander I of Russia had signed the Treaty of Tilsit on the Neman River after a French victory at Friedland. The treaties had gradually strengthened Russia's alliance with France and made Napoleon dominate all their neighbors. The agreement made Russia a French ally and they adopted the Continental System, which was a blockade on the United Kingdom. But the treaty was economically hard on Russia, and Tsar Alexander left the Continental blockade on 31 December 1810. Napoleon was now deprived of his chief foreign policy tool against the United Kingdom.

The Treaty of Schönbrunn, which ended the 1809 war between Austria and France had a clause removing Western Galicia from Austria and annexing it to the Grand Duchy of Warsaw. Russia viewed this against its interests as they considered the territory to be a potential launching point for a French invasion.

The invasion commenced on 24 June 1812. Napoleon had sent a final offer of peace to Saint Petersburg shortly before commencing operations. He never received a reply, so he gave the order to proceed into Russian Poland. He initially met little resistance and moved quickly into the enemy's territory. The French coalition of forces amounted to 449,000 men and 1,146 cannons being opposed by the Russian armies combining to muster 153,000 Russians, 938 cannons, and 15,000 Cossacks. The center of mass of French forces focused on Kaunas and the crossings were made by the French Guard, I, II and III corps amounting to some 120,000 at this point of crossing alone. The actual crossings were made in the area of Alexioten where three pontoon bridges were constructed. The sites had been selected by Napoleon in person. Napoleon had a tent raised and he watched and reviewed troops as they crossed the Neman River.Roads in this area of Lithuania hardly qualified as such, actually being small dirt tracks through areas of dense forest. Supply lines simply could not keep up with the forced marches of the corps and rear formations always suffered the worst privations.

Vilnius, Lithuania
General Raevsky leading a detachment of the Russian Imperial Guard at the Battle of Saltanovka

On June 28, Napoleon entered Vilnius with only light skirmishing. The foraging in Lithuania proved hard as the land was mostly barren and forested. The supplies of forage were less than that of Poland, and two days of forced marching made a bad supply situation worse. Central to the problem were the expanding distances to supply magazines and the fact that no supply wagon could keep up with a forced marched infantry column.

The siege of Riga was a military operation during the Napoleonic Wars. The siege lasted five months from July – December 1812, during which the left flank of Napoleon's "Great Army" (La Grande Armée) tried to gain a favorable position for an attack on Russian-controlled port city Riga, the capital of the Governorate of Livonia. They failed to cross the Daugava River, and accordingly the siege was not carried out completely.

Political pressure on Barclay to give battle and the general's continuing reluctance to do so(viewed as intransigence by the Russian nobility) led to his removal.He was replaced in his position as commander-in-chief by the popular, veteran Mikhail Illarionovich Kutuzov. Kutuzov, however, continued much along the line of the general Russian strategy, fighting the occasional defensive engagement but being careful not to risk the army in an open battle.Instead, the Russian Army fell back ever deeper into Russia's interior. Following a defeat at Smolensk on August 16–18 he continued the move east. Unwilling to give up Moscow without a fight, Kutuzov took up a defensive position some 75 miles before Moscow at Borodino. Meanwhile, French plans to quarter at Smolensk were abandoned, and Napoleon pressed his army on after the Russians."

The Battle of Valutino took place on 19 August 1812, between a corps of French and allied troops led by Marshal Ney, about 35,000 strong, and a strong rear-guard of General Barclay de Tolly's Russian army of about 25,000, commanded by the general himself. The Russians were strongly posted in marshy ground, protected by a small stream, about 20 Kilometers east of Smolensk. The French, attacking resolutely, captured the Russian position in the face of considerable physical obstacles.

The French suffered around 7,000-8,800 casualties. The Russians lost about 6,000. Napoleon was furious after the battle, realizing that another good chance to trap and destroy the Russian army had been lost. 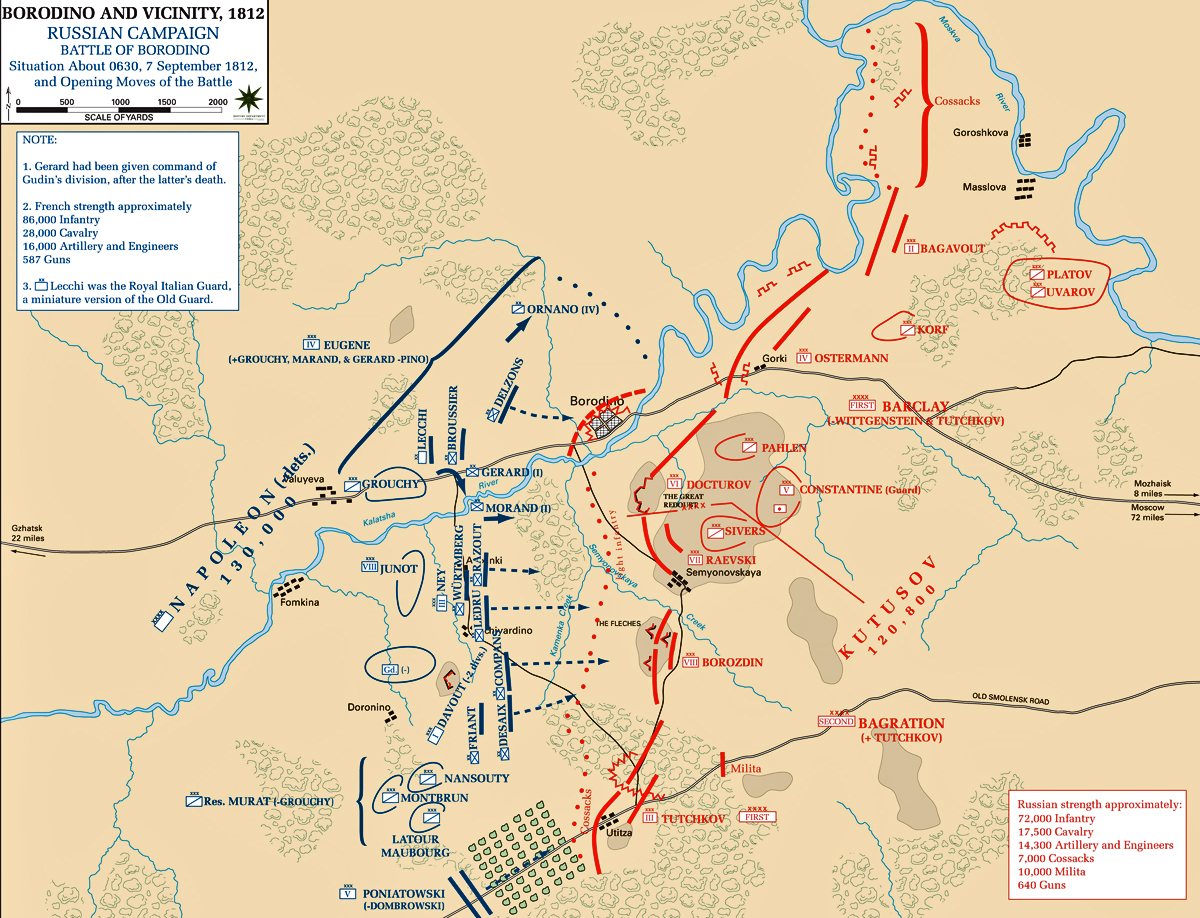 The Battle of Borodino, fought on September 7, 1812, was the largest and bloodiest battle of the French invasion of Russia, involving more than 250,000 troops and resulting in at least 70,000 casualties. The French Grande Armée under Emperor Napoleon I attacked the Imperial Russian Army of General Mikhail Kutuzov near the village of Borodino, west of the town of Mozhaysk and eventually captured the main positions on the battlefield but failed to destroy the Russian army. About a third of Napoleon's soldiers were killed or wounded; Russian losses, while heavier, could be replaced due to Russia's large population, since Napoleon's campaign took place on Russian soil."

Moscow, Russia
Napoleon watching the fire of Moscow in September 1812

On September 14, 1812, Napoleon moved into Moscow. However, he was surprised to have received no delegation from the city. At the approach of a victorious general, the civil authorities customarily presented themselves at the gates of the city with the keys to the city in an attempt to safeguard the population and their property. As nobody received Napoleon he sent his aides into the city, seeking out officials with whom the arrangements for the occupation could be made. When none could be found, it became clear that the Russians had left the city unconditionally. In a normal surrender, the city officials would be forced to find billets and make arrangements for the feeding of the soldiers, but the situation caused a free-for-all in which every man was forced to find lodgings and sustenance for himself. Napoleon was secretly disappointed by the lack of custom as he felt it robbed him of a traditional victory over the Russians, especially in taking such a historically significant city. To make matters worse, Moscow had been stripped of all supplies by its governor, Feodor Rostopchin, who had also ordered the prisons to be opened. According to Germaine de Staël, who left the city a few weeks before Napoleon arrived, it was Rostopchin who ordered to set his mansion on fire.

Sitting in the ashes of a ruined city with no foreseeable prospect of Russian capitulation, idle troops, and supplies diminished by use and Russian operations of attrition, Napoleon had little choice but to withdraw his army from Moscow. He began the long retreat by the middle of October 1812, leaving the city himself on October 19. At the Battle of Maloyaroslavets, Kutuzov was able to force the French Army into using the same Smolensk road on which they had earlier moved east, the corridor of which had been stripped of food by both armies. This is often presented as an example of scorched earth tactics. Continuing to block the southern flank to prevent the French from returning by a different route, Kutuzov employed partisan tactics to repeatedly strike at the French train where it was weakest. As the retreating French train broke up and became separated, Cossack bands and light Russian cavalry assaulted isolated French units. 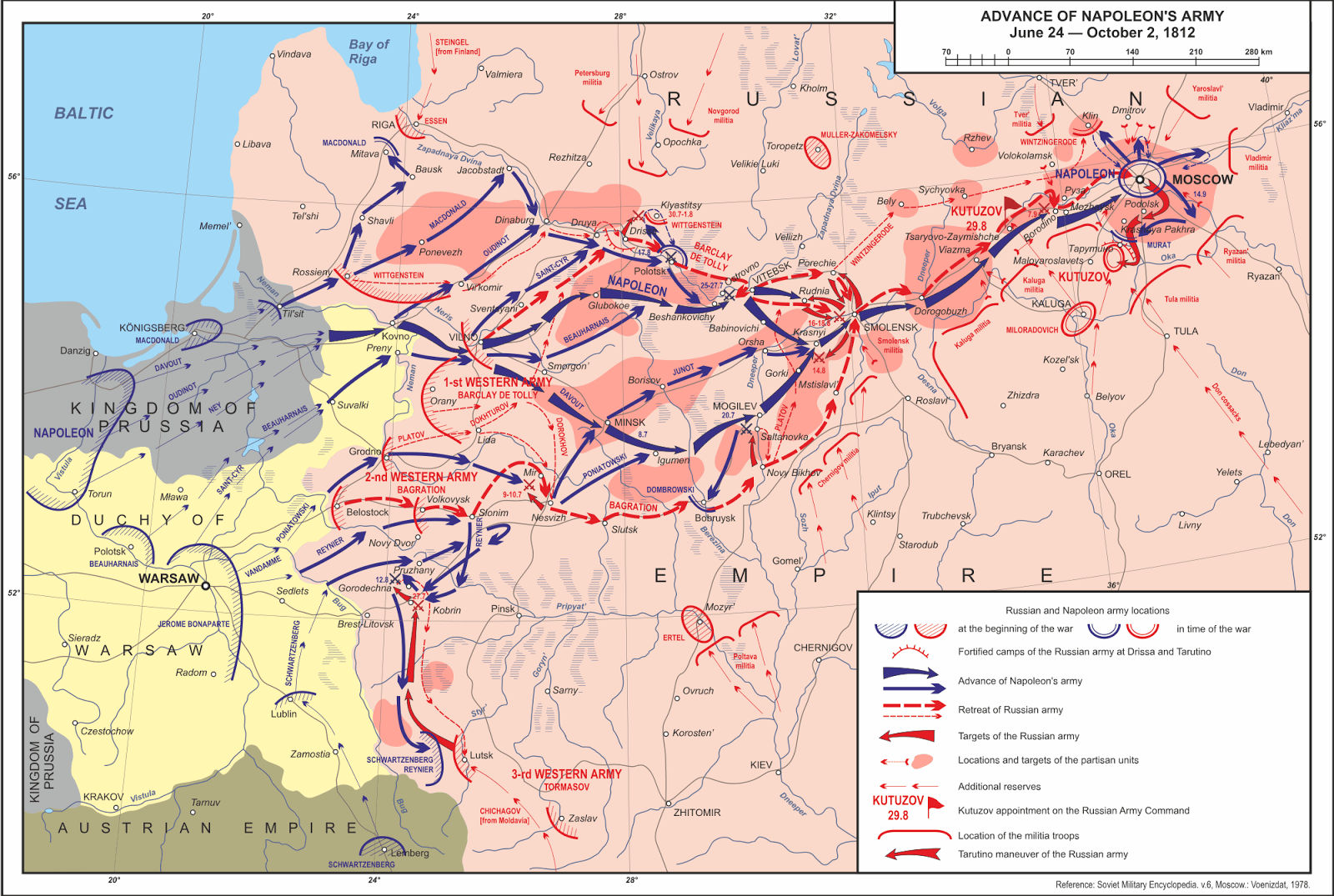 Supplying the army in full became an impossibility. The lack of grass and feed weakened the remaining horses, almost all of which died or were killed for food by starving soldiers. Without horses, the French cavalry ceased to exist; cavalrymen had to march on foot. Lack of horses meant many cannons and wagons had to be abandoned. Much of the artillery lost was replaced in 1813, but the loss of thousands of wagons and trained horses weakened Napoleon's armies for the remainder of his wars. Starvation and disease took their toll, and desertion soared. Many of the deserters were taken prisoner or killed by Russian peasants. Badly weakened by these circumstances, the French military position collapsed. Further, defeats were inflicted on elements of the Grande Armée at Vyazma, Polotsk and Krasny. The crossing of the river Berezina was a final French calamity; two Russian armies inflicted heavy casualties on the remnants of the Grande Armée as it struggled to escape across improvised bridges.

The Russian victory over the French Army in 1812 was a significant blow to Napoleon's ambitions of European dominance. This war was the reason the other coalition allies triumphed once and for all over Napoleon. His army was shattered and morale was low, both for French troops still in Russia, fighting battles just before the campaign ended, and for the troops on other fronts. Napoleon alone was able to maintain any semblance of order; with his disappearance, Murat and the other officers lost all authority.

In January 1813 the French army gathered behind the Vistula some 23,000 strong. The Austrian and Prussian troops mustered some 35,000 men in addition. The number of deserters and stragglers having left Russia alive is unknown by definition. The number of new inhabitants of Russia is unknown. The number of prisoners is estimated at around 100,000, of whom more than 50,000 died in captivity.

The War of the Sixth Coalition started in 1813 as the Russian campaign was decisive for the Napoleonic Wars and led to Napoleon's defeat and exile on the island of Elba. For Russia, the term Patriotic War (an English rendition of the Russian Отечественная война) became a symbol for a strengthened national identity that had a great effect on Russian patriotism in the 19th century. A series of revolutions followed, starting with the Decembrist revolt of 1825 and ending with the February Revolution of 1917.

Marshal of the Russian Empire

How well do you know the French Invasion of Russia?
Play Timelines