Swedish troops lands in the Duchy of Pomerania

Battle of Frankfurt an der Oder

Arrest and murder of Wallenstein

Sweden’s Protestant king, Gustavus Adolphus, decided to get involved in defending the Protestants in the Holy Roman Empire. However, France’s Catholic chief minister and Catholic Cardinal Richelieu were getting nervous about the increased power of the Hapsburgs. He, therefore, aided the Swedish Protestants in their fight against Habsburg Catholicism!

Richelieu's helped negotiate the Truce of Altmark between Sweden and Polish–Lithuanian Commonwealth , freeing Gustavus Adolphus to enter the war.

When the Magdeburg citizens refused to pay a demanded tribute to the emperor, Imperial forces under the command of Johann Tserclaes, Count of Tilly laid siege to the city within a matter of months. The city was besieged from 20 March 1631 and Tilly put his subordinate Imperial Field Marshal Gottfried Heinrich Graf zu Pappenheim, a Catholic convert, in command while he campaigned elsewhere. During fierce fighting, Imperial troops numbering 24,000, roughly the same number as Magdeburg's entire population, conquered several sconces of the city's fortification and Tilly demanded capitulation.
1630 Jun 1

Swedish troops lands in the Duchy of Pomerania

The king made no formal declaration of war against the Catholic powers. After the attack that had taken place on Stralsund, his ally, he felt that he had sufficient pretext to land without declaring war. Using Stralsund as a bridgehead, in June 1630 nearly 18,000 Swedish troops landed in the Duchy of Pomerania. Gustavus signed an alliance with Bogislaw XIV, Duke of Pomerania, securing his interests in Pomerania against the Catholic Polish–Lithuanian Commonwealth, another Baltic competitor linked to Ferdinand by family and religion. Expectations of widespread support proved unrealistic; by the end of 1630, the only new Swedish ally was Magdeburg, which was besieged by Tilly.
1630 Jul 20

The king then ordered that the defenses to Stettin be improved. All of the people of the city as well as villagers were rounded up and the defensive works were quickly completed.
1631 Apr 13

Battle of Frankfurt an der Oder

The Battle of Frankfurt was fought between the Swedish Empire and the Holy Roman Empire for the strategically important, fortified Oder crossing Frankfurt an der Oder, Brandenburg, Germany.

After two months of siege Pappenheim finally convinced Tilly, who had brought reinforcements, to storm the city on 20 May with 40,000 men under the personal command of Pappenheim. The Magdeburg citizens had hoped in vain for a Swedish relief attack. On the last day of the siege, the councillors decided it was time to sue for peace, but word of their decision did not reach Tilly in time. In the early morning of 20 May, the attack began with heavy artillery fire. Soon afterward, Pappenheim and Tilly launched infantry attacks. The fortifications were breached and Imperial forces were able to overpower the defenders to open the Kröcken Gate, which allowed the entire army to enter the city to plunder it. The defence of the city was further weakened and demoralised when commander Dietrich von Falkenberg was shot dead by Catholic Imperial troops. The Sack of Magdeburg is considered the worst massacre of the Thirty Years' War resulting in the deaths of around 20,000. Magdeburg, then one of the largest cities in Germany, having well over 25,000 inhabitants in 1630, did not recover its importance until well into the 18th century.
Source:Wikipedia Link
1631 Sep 7

Fought at a crossroads near Breitenfeld, the battle was the Protestants' first major victory of the Thirty Years War.
Source:Wikipedia Link
1632 Jan 1

Nuremberg, Germany
Plan of the siege of Nürnberg by the Swedisch army and their king Gustav II Adolf, August 1632.

In 1632, rather than face the numerically superior Imperial army under the command of Albrecht von Wallenstein, Gustavus Adolphus of Sweden ordered a tactical retreat into the city of Nuremberg. Wallenstein's army immediately started to invest Nuremberg and laid siege to the city, waiting for hunger and epidemics to cripple the Swedish force. Eventually, the siege ended after eleven weeks when the Swedes and their allies withdrew. Through a combination of disease, hunger and battle fatalities, about 10,000 inhabitants of Nuremberg and 20,000 Swedish and allied forces died. The Imperial army suffered about 20,000 dead. Austria was saved for the short term, but the engagement was not decisive.
Source:Wikipedia Link
1632 Mar 1

In March 1632 King Gustavus Adolphus of Sweden invaded Bavaria, with an army of Swedish soldiers and German mercenaries. Adolphus planned to move his forces parallel to the Danube River, moving eastward to capture the fortified cities of Ingolstadt, Regensburg, and Passau - so that the Swedes would have a clear path to threaten Vienna and the Emperor. However these fortified cities on the Danube were too strong for Adolphus to take.
1632 Apr 5

Battlefield view from the east: River Lech flows from right to center, then flows west (up) into Donau river. Town of Rain center top; Donauwörth town top left. Swedish artillery is firing across the river from the south (left), Swedish cavalry is crossing it bottom center. On the other side of the river the Imperial army is retreating north (right) amidst clouds of smoke from the artillery barrage.

The forces involved in this conflict were 40,000 Swedish troops under Gustavus Adolphus and 25,000 Catholic League troops under Johan Tserclaes, Count of Tilly. It was the second meeting between the two legendary generals (see First Breitenfeld when Tilly received the first setback of his long and storied career) and like at Breitenfeld, Tilly lost when Gustavus forded the river Lech under the cover of his superb artillery. The immediate result of the battle was that Bavaria lay open for occupation by the Swedish army, enabling Gustavus Adolphus to temporarily threaten the Austrian heartland. The death of Tilly also led to the recall of Albrecht von Wallenstein into Imperial service. He would raise a new army and challenge the Swedes at Nürnberg in August.
Source:Wikipedia Link
1632 Aug 1

The War (1632–1634) was a conflict fought between the Polish–Lithuanian Commonwealth and Russia. It is considered a separate but related part of the Thirty Years' War

The Battle of Lützen (16 November 1632) was one of the most important battles of the Thirty Years' War. Though losses were about equally heavy on both sides, the battle was a Protestant victory, but cost the life of one of the most important leaders of the Protestant side, the Swedish King Gustavus Adolphus, which led the Protestant cause to lose direction. The Imperial field marshal Pappenheim was also fatally wounded. The loss of Gustavus Adolphus left Catholic France as the dominant power on the "Protestant" (anti-Habsburg) side, eventually leading to the founding of the League of Heilbronn and the open entry of France into the war. The battle was characterized by fog, which lay heavy over the fields of Saxony that morning. The phrase "Lützendimma" (Lützen fog) is still used in the Swedish language in order to describe particularly heavy fog.
Source:Wikipedia Link
1634 Feb 5

Arrest and murder of Wallenstein

Rumours were circulating that Wallenstein was preparing to switch sides. The Eger Bloodbath was the culmination of an internal purge in the army of the Holy Roman Empire. On 25 February 1634, a group of Irish and Scottish officers acting under the approval of Ferdinand II, Holy Roman Emperor, assassinated generalissimo Albrecht von Wallenstein and a group of his companions in the town of Eger (today Cheb, Czech Republic). The assassins were equated to executioners by a royal decree and rewarded with property confiscated from the families of their victims. The purge continued through the persecution of other high-ranking military personnel who were seen as Wallenstein's supporters.

Nördlingen, Germany
The Battle of Nördlingen

The Roman Catholic Imperial army, bolstered by 15,000 Spanish soldiers, won a crushing victory over the combined Protestant armies of Sweden and their German-Protestant allies (Heilbronn Alliance). After the failure of the tercio system in the first Battle of Breitenfeld in 1631, the professional Spanish troops deployed at Nördlingen proved the tercio system could still contend with the deployment improvements devised by Maurice of Orange and Gustavus Adolphus of Sweden for their respective troops.
Source:Wikipedia Link
1635 May 30

The Peace of Prague ended Saxony's participation in the Thirty Years War. The terms would later form the basis of the 1648 Peace of Westphalia. Other German princes subsequently joined the treaty and although the Thirty Years War continued, it is generally agreed Prague ended it as a religious civil war within the Holy Roman Empire. Thereafter, the conflict was largely driven by foreign powers, including Spain, Sweden, and France.

Key Figures for The Swedish Phase

Book Recommenations for The Swedish Phase 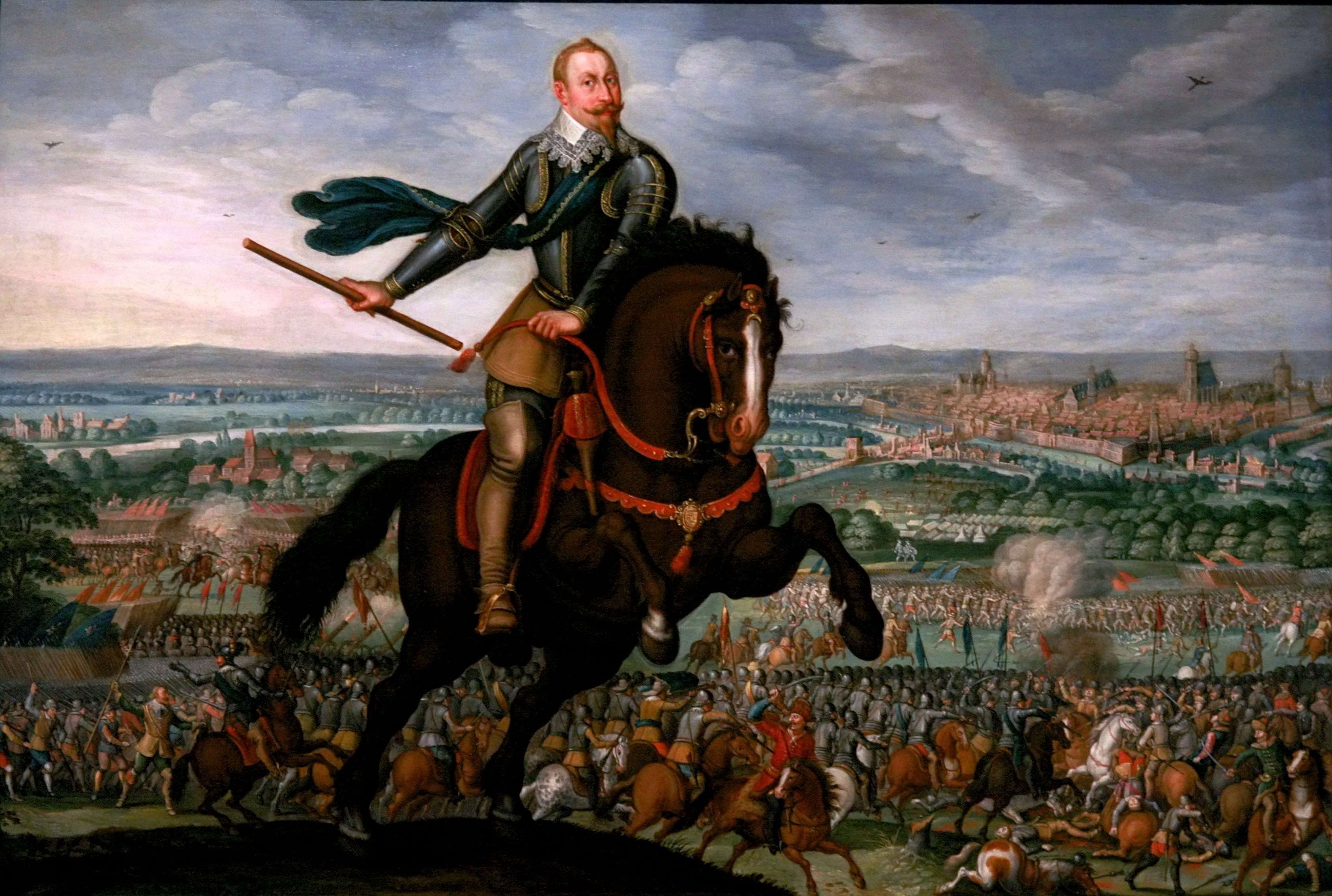 How well do you know the Thirty Years War: The Swedish Phase?
Play Timelines