First and Second Battle of Rheinfelden

Battle of the Downs

Though Gustavus Adolphus death had dealt a blow to the Protestants course, Cardinal Richelieu was actually more afraid of the threat of the Habsburgs, who were gaining more and more power as they racked up victories, than he was of the Protestants. He believed the Hapsburg rulers could become a rival to the French absolute kings he had worked so hard to strengthen. As a result, Richelieu funded and sent the military to Spain to make war on the weaker side of the Habsburg clan. Once France joined the fray, the final phase of the Thirty Years' War was on. It quickly became the bloodiest, as a major power had begun fighting another major power. Both sides participated in cruelty upon cruelty to rectify their power,

France
Portrait of Cardinal Richelieu a few months before his death

A serious Swedish defeat at Nördlingen in September 1634 threatened their participation, leading France to intervene directly. Under the April 1635 Treaty of Compiègne negotiated with Axel Oxenstierna, Richelieu agreed new subsidies for the Swedes. He also hired mercenaries led by Bernhard of Saxe-Weimar for an offensive in the Rhineland and declared war on Spain in May, beginning the 1635 to 1659 Franco-Spanish War.

After invading the Spanish Netherlands in May 1635, the poorly equipped French army collapsed, suffering 17,000 casualties from disease and desertion.

A Spanish offensive in 1636 reached Corbie in Northern France; although it caused panic in Paris, lack of supplies forced them to retreat, and it was not repeated.

Wismar, Germany
Cardinal Richelieu at the Siege of La Rochelle

In the March 1636 Treaty of Wismar, France formally joined the Thirty Years War in alliance with Sweden;

The Holy Roman Emperor, with his Saxon and Roman Catholic allies, was fighting for the control of northern Germany against the Swedes and an alliance of Protestant princes opposed to Habsburg hegemony. The Imperial army was larger in strength than the Swedish army, but at least one-third of it was composed of Saxon units of questionable quality. The Swedish artillery was considerably stronger, leading the Imperial commanders to maintain a largely defensive position on the hill tops. A Swedish-allied army commanded jointly by Johan Banér and Alexander Leslie, later 1st Earl of Leven decisively defeated a combined Imperial-Saxon army, led by Count Melchior von Hatzfeld and the Saxon Elector John George I.

First and Second Battle of Rheinfelden

Having been pushed to the west bank of the Rhine by the Imperial advance, Bernhard's army had settled in Alsace during 1635 and had done little except help repulse the Imperial invasion of France under the Cardinal-Infante Ferdinand and Matthias Gallas in 1636.

Early in February 1638, having been prodded by the French government, Bernhard advanced his army of 6,000 men and 14 guns to the Rhine in order to find a crossing. Arriving at an important crossing point at the town of Rheinfelden, Bernhard prepared to invest the town from the south.

In order to prevent this, the Imperialists, under the Italian mercenary Count Federico Savelli and German general Johann von Werth, moved through the Black Forest to attack Bernhard's army and relieve the town. Bernhard was beaten in the first battle but managed to defeat and capture Werth and Savelli in the second.

Breisach am Rhein, Germany
Death of Gustavus at Lützen by Carl Wahlbom (1855)

The Battle of Breisach was fought on 18 August — 17 December 1638 as part of Thirty Years' War. It ended after several unsuccessful relief attemps by Imperial forces with the surrender of the Imperial garrison to the French, commanded by Bernard of Saxe-Weimar. It secured French control of Alsace and severed the Spanish Road.
Source:Wikipedia Link
1639 Oct 21

Battle of the Downs

near the Downs, English Channe
Before the Battle of the Downs by Reinier Nooms, circa 1639, depicting the Dutch blockade off the English coast, the vessel shown is the Aemilia, Tromp's flagship.

The entry of France into the Thirty Years War had blocked off the overland "Spanish Road" to Flanders. To support the Spanish army of Flanders of Cardinal-Infante Ferdinand, the Spanish navy had to ferry supplies by sea via Dunkirk, the last Spanish-controlled port on the North Sea coast.

In the spring of 1639, the Count-Duke of Olivares ordered the construction and assembly of a new fleet at A Coruña for a new relief jaunt to Dunkirk. 29 warships were assembled in four squadrons, soon joined by an additional 22 warships (also in four squadrons) from the Spanish Mediterranean fleet. Twelve English transport ships also arrived, contracted to carry the Spanish army under the flag of English neutrality.

From intelligence networks, the Dutch learned that the Spanish fleet might attempt to make for the anchorage known as The Downs, off the English coast, between Dover and Deal. The naval Battle of the Downs was a decisive defeat of the Spanish, by the United Provinces of the Netherlands, commanded by Lieutenant-Admiral Maarten Tromp.

The Battle of Wolfenbüttel (29 June 1641) took place near the town of Wolfenbüttel, in what is now Lower Saxony, during the Thirty Years' War. Swedish forces led by Carl Gustaf Wrangel and Hans Christoff von Königsmarck and Bernardines led by Jean-Baptiste Budes, Comte de Guébriant withstood an assault by Imperial forces led by Archduke Leopold Wilhelm of Austria, forcing the Imperials to retreat.

The Battle of Kempen was a battle during the Thirty Years' War in Kempen, Westphalia on 17 January 1642. It resulted in the victory of a French-Weimar-Hessian army under the French Comte de Guébriant and the Hessian Generalleutnant Kaspar Graf von Eberstein against the Imperial Army under General Guillaume de Lamboy, who was captured.

The Second Battle of Breitenfeld was a decisive victory for the Swedish army under the command of Field Marshal Lennart Torstenson over an Imperial Army of the Holy Roman Empire under the command of Archduke Leopold Wilhelm of Austria and his deputy, Prince-General Ottavio Piccolomini, Duke of Amalfi.

The Swedes captured Leipzig in December, giving them a significant new base in Germany, and although they failed to take Freiberg in February 1643, the Saxon army was reduced to a few garrisons.

The Battle of Rocroi, fought on 19 May 1643, was a major engagement of the Thirty Years' War. It was fought between a French army led by the 21-year-old Duke of Enghien (later known as the Great Condé) and Spanish forces under General Francisco de Melo, only five days after the accession of Louis XIV to the throne of France following his father's death. Rocroi shattered the myth of invincibility of the Spanish Tercios, the terrifying infantry units that had dominated European battlefields for the previous 120 years. The battle is therefore often considered to mark the end of Spanish military greatness and the beginning of French hegemony in Europe. After Rocroi, the Spanish abandoned the Tercio system and adopted the Line infantry doctrine used by the French. Three weeks after Rocroi, Ferdinand invited Sweden and France to attend peace negotiations in the Westphalian towns of Münster and Osnabrück, but talks were delayed when Christian of Denmark blockaded Hamburg and increased toll payments in the Baltic.

Denmark-Norway
The siege of Brno in 1645, by Swedish and Transylvanian forces led by Torstenson

Denmark had withdrawn from the Thirty Years' War in the Treaty of Lübeck (1629). After its victories in the war, Sweden felt it had to attack Denmark due to its advantageous geographical position in relation to Sweden. Sweden invaded in a short two-year war. In the Second Treaty of Brömsebro (1645), which concluded the war, Denmark had to make huge territorial concessions and exempt Sweden from the Sound Dues, de facto acknowledging the end of the Danish dominium maris baltici. Danish efforts to reverse this result in the Second Northern, Scanian and Great Northern wars failed.
Source:Wikipedia Link
1648 May 17

The Battle of Zusmarshausen was fought on 17 May 1648 between Bavarian-Imperial forces under von Holzappel and an allied Franco-Swedish army under the command of Turenne in the modern Augsburg district of Bavaria, Germany. The allied force emerged victorious, and the Imperial army was only rescued from annihilation by the stubborn rearguard fighting of Raimondo Montecuccoli and his cavalry. Zusmarshausen was the last major battle of the war to be fought on German soil, and was also the largest battle (in terms of numbers of men involved; casualties were relatively light) to take place in the final three years of fighting.
Source:Wikipedia Link
1648 Jul 25

The Battle of Prague, which occurred between 25 July and 1 November 1648 was the last action of the Thirty Years' War. While the negotiations for the Peace of Westphalia were proceeding, the Swedes took the opportunity to mount one last campaign into Bohemia. The main result, and probably the main aim, was to loot the fabulous art collection assembled in Prague Castle by Rudolph II, Holy Roman Emperor (1552–1612), the pick of which was taken down the Elbe in barges and shipped to Sweden.

After occupying the castle and the western bank of the Vltava for some months, the Swedes withdrew when news of the signing of the treaty reached them. It was the last major clash of the Thirty Years' War, taking place in the city of Prague, where the war originally began 30 years earlier.

The Peace of Westphalia is the collective name for two peace treaties signed in October 1648 in the Westphalian cities of Osnabrück and Münster. They ended the Thirty Years' War and brought peace to the Holy Roman Empire, closing a calamitous period of European history that killed approximately eight million people. 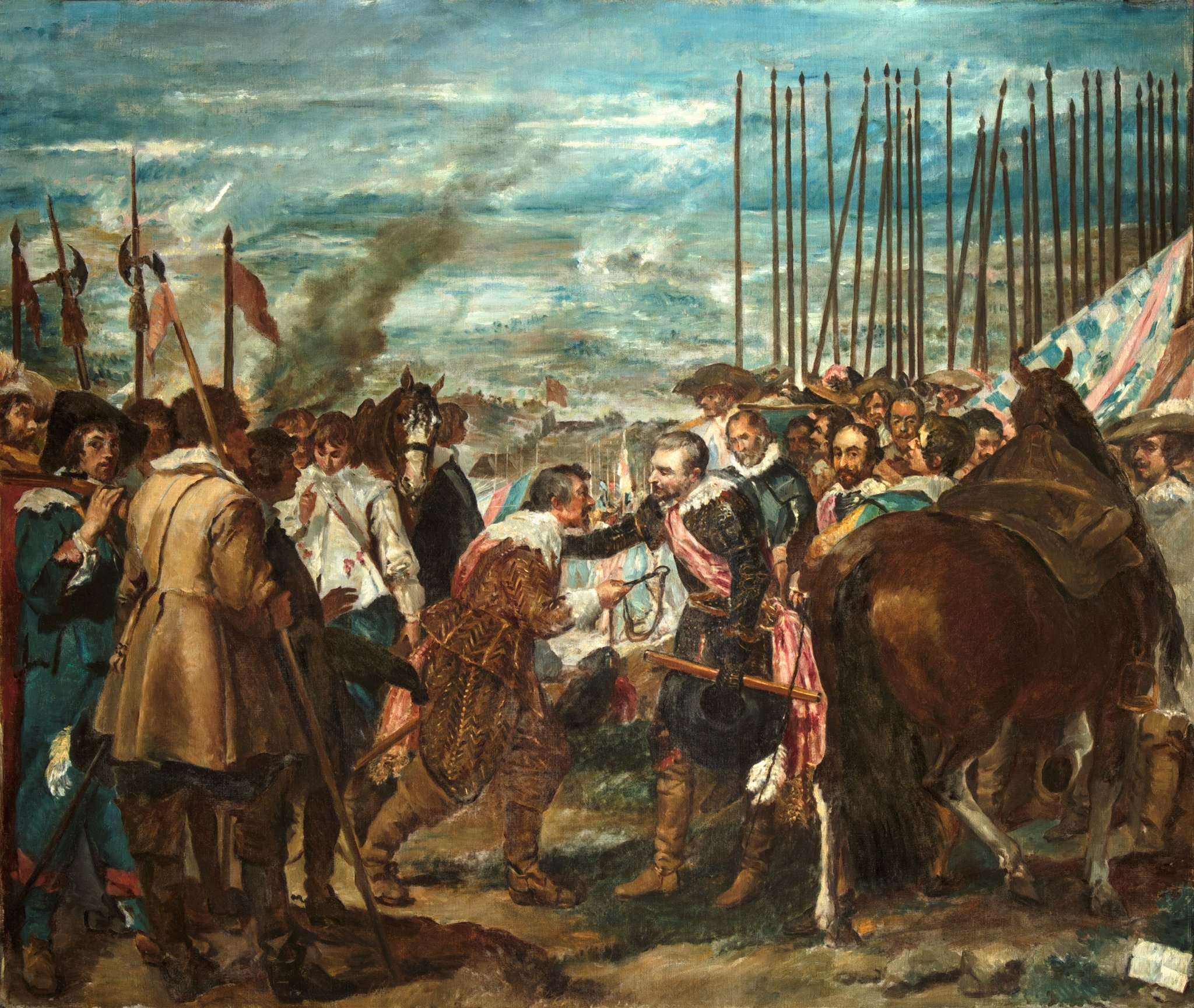 How well do you know the Thirty Years War: French Phase?
Play Timelines