Invasion of England: Carlisle is taken

The Jacobite rising of 1745 was an attempt by Charles Edward Stuart to regain the British throne for his father, James Francis Edward Stuart. It took place during the War of the Austrian Succession, when the bulk of the British Army was fighting in mainland Europe, and proved to be the last in a series of revolts that began in 1689, with major outbreaks in 1708, 1715 and 1719.

The 1688 Glorious Revolution replaced James II and VII with his Protestant daughter Mary and her Dutch husband William, who ruled as joint monarchs of England, Ireland and Scotland. Neither Mary, who died in 1694, nor her sister Anne, had surviving children, which left their Catholic half-brother James Francis Edward as the closest natural heir. The 1701 Act of Settlement excluded Catholics from the succession and when Anne became queen in 1702, her heir was the distantly related but Protestant Electress Sophia of Hanover. Sophia died in June 1714 and when Anne followed two months later in August, Sophia's son succeeded as George I.

Louis XIV of France, the primary source of support for the exiled Stuarts, died in 1715 and his successors needed peace with Britain in order to rebuild their economy. The 1716 Anglo-French alliance forced James to leave France; he settled in Rome on a Papal pension, making him even less attractive to the Protestants who formed the vast majority of his British support. Jacobite rebellions in 1715 and 1719 both failed. The birth of his sons Charles and Henry helped maintain public interest in the Stuarts, but by 1737, James was "living tranquilly in Rome, having abandoned all hope of a restoration".

At the same time, by the late 1730s French statesmen viewed the post-1713 expansion in British trade as a threat to the European balance of power and the Stuarts became one of a number of potential options for reducing it. However, a low-level insurgency was far more cost-effective than an expensive restoration, especially since they were unlikely to be any more pro-French than the Hanoverians. The Scottish Highlands was an ideal location, due to the feudal nature of clan society, their remoteness and terrain; but as many Scots recognised, an uprising would also be devastating for the local populace.

Trade disputes between Spain and Britain led to the 1739 War of Jenkins' Ear, followed in 1740–41 by the War of the Austrian Succession. The long-serving British prime minister Robert Walpole was forced to resign in February 1742 by an alliance of Tories and anti-Walpole Patriot Whigs, who then excluded their partners from government. Furious Tories like the Duke of Beaufort asked for French help in restoring James to the British throne.

In early July, Charles boarded Du Teillay at Saint-Nazaire accompanied by the "Seven Men of Moidart", the most notable being John O'Sullivan, an Irish exile and former French officer who acted as chief of staff. The two vessels left for the Western Isles on 15 July but were intercepted four days out by HMS Lion, which engaged Elizabeth. After a four-hour battle, both were forced to return to port; loss of the volunteers and weapons on Elizabeth was a major setback but Du Teillay landed Charles at Eriskay on 23 July.

Glenfinnan, Scotland, UK
The raising of the Standard at Glenfinnan

On 19 August, the rebellion was launched with the raising of the Royal Standard at Glenfinnan, witnessed by a force of Highlanders O'Sullivan estimated as around 700.

At Perth, Charles Edward Stuart claimed the throne for his father. On 17 September, Charles entered Edinburgh unopposed, although Edinburgh Castle itself remained in government hands; James was proclaimed King of Scotland the next day and Charles his Regent.
1745 Sep 21

The Battle of Prestonpans, also known as the Battle of Gladsmuir, was fought on 21 September 1745, near Prestonpans, in East Lothian; it was the first significant engagement of the Jacobite rising of 1745.

Jacobite forces led by the Stuart exile Charles Edward Stuart defeated a government army under Sir John Cope, whose inexperienced troops broke in the face of a Highland charge. The battle lasted less than thirty minutes and was a huge boost to Jacobite morale, establishing the revolt as a serious threat to the British government.

Invasion of England: Carlisle is taken

Murray divided the army into two columns to conceal their destination from General Wade, government commander in Newcastle, and entered England on 8 November unopposed. On 10th, they reached Carlisle, an important border fortress before the 1707 Union but whose defences were now in poor condition, held by a garrison of 80 elderly veterans. Despite this, without siege artillery the Jacobites would have to starve it into submission, an operation for which they had neither the equipment or time. The castle capitulated on 15 November, after learning Wade's relief force was delayed by snow;
1745 Dec 1

At previous Council meetings in Preston and Manchester, many Scots felt they had already gone far enough, but agreed to continue when Charles assured them Sir Watkin Williams Wynn would meet them at Derby, while the Duke of Beaufort was preparing to seize the strategic port of Bristol. When they reached Derby on 4 December, there was no sign of these reinforcements, and the Council convened the following day to discuss next steps. The council were overwhelmingly in favour of retreat, strengthened by news the French had landed supplies, pay and Scots and Irish regulars from the Royal Écossais (Royal Scots) and the Irish Brigade at Montrose.
Source:Wikipedia Link
1745 Dec 18

The Clifton Moor Skirmish took place on the evening of Wednesday 18 December during the Jacobite rising of 1745. Following the decision to retreat from Derby on 6 December, the fast-moving Jacobite army split into three smaller columns; on the morning of 18th, a small force of dragoons led by Cumberland and Sir Philip Honywood made contact with the Jacobite rearguard, at that point commanded by Lord George Murray.
Source:Wikipedia Link
1746 Jan 17

In early January, the Jacobite army besieged Stirling Castle but made little progress and on 13 January, government forces under Henry Hawley advanced north from Edinburgh to relieve it. He arrived at Falkirk on 15 January and the Jacobites attacked late in the afternoon of 17 January, taking Hawley by surprise.

Fought in failing light and heavy snow, Hawley's left wing was routed but his right held firm and for a while both sides believed they had been defeated. As a result of this confusion, the Jacobites failed to follow up, leading to bitter disputes over responsibility for failure and allowing the government troops to regroup in Edinburgh, where Cumberland took over command from Hawley.

Cumberland's army advanced along the coast, allowing it to be resupplied by sea, and entered Aberdeen on 27 February; both sides halted operations until the weather improved.

Battle of Culloden won by the British led by the king's younger son, Prince William Duke of Cumberland. Charles Edward Stuart decided to fight the battle on a flat moor outside Inverness, against military advice. It was a case of English cannons against Scottish daggers and swords

A potential 5,000 to 6,000 Jacobites remained in arms and over the next two days, an estimated 1,500 survivors assembled at Ruthven Barracks; however on 20 April, Charles ordered them to disperse, arguing French assistance was required to continue the fight and they should return home until he returned with additional support.

After Culloden, government forces spent several weeks searching for rebels, confiscating cattle and burning non-juring Episcopalian and Catholic meeting houses. The brutality of these measures was driven by a widespread perception on both sides that another landing was imminent. Regular soldiers in French service were treated as prisoners of war and later exchanged, regardless of nationality, but 3,500 captured Jacobites were indicted for treason. Of these, 120 were executed, primarily deserters and members of the Manchester Regiment. Some 650 died awaiting trial; 900 were pardoned and the rest transported.
Source:Wikipedia Link
1746 Sep 20

After evading capture in the Western Highlands, Charles was picked up by a French ship on 20 September; he never returned to Scotland but the collapse of his relationship with the Scots always made this unlikely. Even before Derby, he accused Murray and others of treachery; these outbursts became more frequent due to disappointment and heavy drinking, while the Scots no longer trusted his promises of support.

Historian Winifred Duke claimed "...the accepted idea of the Forty-Five in the minds of most people is a hazy and picturesque combination of a picnic and a crusade ... in cold reality, Charles was unwanted and unwelcomed." Modern commentators argue the focus on "Bonnie Prince Charlie" obscures the fact many of those who participated in the Rising did so because they opposed the Union, not the Hanoverians; this nationalist aspect makes it part of an ongoing political idea, not the last act of a doomed cause and culture.

After 1745, the popular perception of Highlanders changed from that of "wyld, wykkd Helandmen," racially and culturally separate from other Scots, to members of a noble warrior race. For a century before 1745, rural poverty drove increasing numbers to enlist in foreign armies, such as the Dutch Scots Brigade. However, while military experience itself was common, the military aspects of clanship had been in decline for many years, the last significant inter-clan battle being Maol Ruadh in August 1688. Foreign service was banned in 1745 and recruitment into the British Army accelerated as deliberate policy. Victorian imperial administrators adopted a policy of focusing their recruitment on the so-called "martial races," Highlanders being grouped with Sikhs, Dogras and Gurkhas as those arbitrarily identified as sharing military virtues.

The rising and its aftermath has been a popular topic for many writers; the most significant of these was Sir Walter Scott, who in the early 19th century presented the Rebellion as part of a shared Unionist history. The hero of his novel Waverley is an Englishman who fights for the Stuarts, rescues a Hanoverian Colonel and finally rejects a romantic Highland beauty for the daughter of a Lowland aristocrat. Scott's reconciliation of Unionism and the '45 allowed Cumberland's nephew George IV to be painted less than 70 years later wearing Highland dress and tartans, previously symbols of Jacobite rebellion.

Key Figures for Jacobite rising of 1745

Book Recommenations for Jacobite rising of 1745 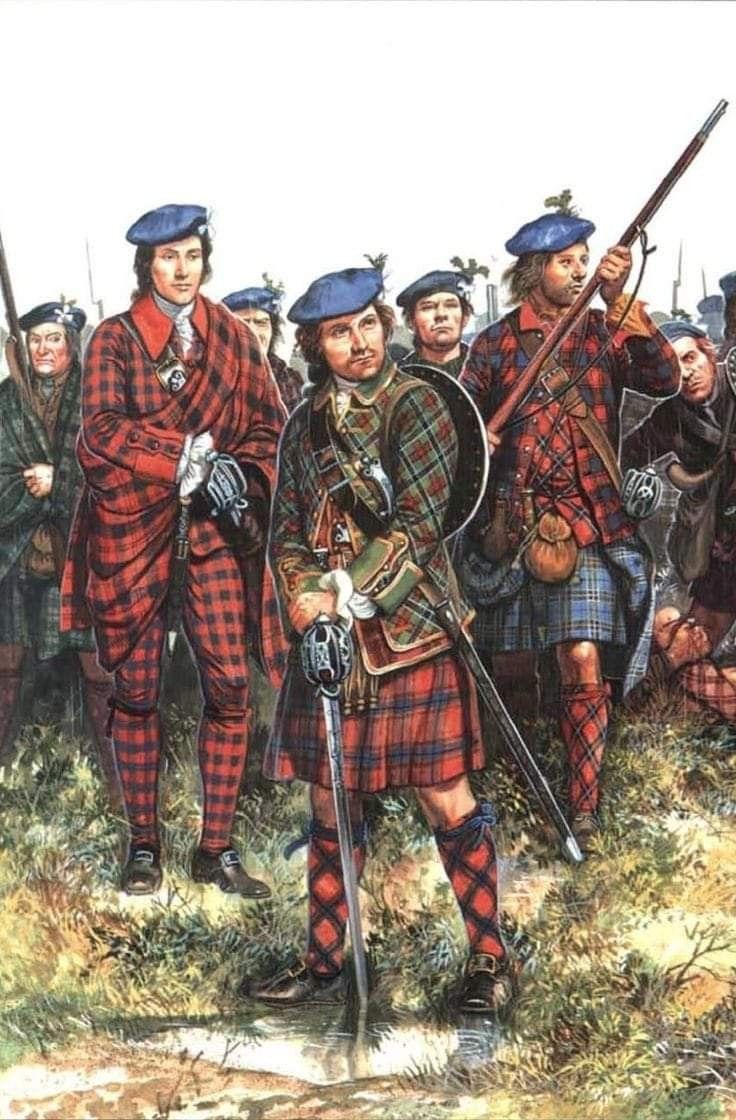 How well do you know the Jacobite rising of 1745?
Play Timelines