After the failed peace negotiations of the inter-war years, Hideyoshi launched the second invasion of Korea. One of the main strategic differences between the first and second invasions was that conquering China was no longer an explicit goal for the Japanese. Failing to gain a foothold during Katō Kiyomasa's Chinese campaign and the near complete withdrawal of the Japanese forces during the first invasion had established that the Korean peninsula was the more prudent and realistic objective.

After the failed peace negotiations of the inter-war years, Toyotomi Hideyoshi launched the second invasion of Korea. One of the main strategic differences between the first and second invasions was that conquering China was no longer an explicit goal for the Japanese. Failing to gain a foothold during Katō Kiyomasa's Chinese campaign and the near complete withdrawal of the Japanese forces during the first invasion had established that the Korean peninsula was the more prudent and realistic objective.

Soon after the Chinese ambassadors had safely returned to China in 1597, Hideyoshi sent approximately 200 ships with an estimated 141,100 men under the overall command of Kobayakawa Hideaki. Japan's second force arrived unopposed on the southern coast of Gyeongsang Province in 1596.

In addition, upon hearing the news in China, the imperial court in Beijing appointed Yang Hao as the supreme commander of an initial mobilization of 55,000 troops from various (and sometimes remote) provinces across China, such as Sichuan, Zhejiang, Huguang, Fujian, and Guangdong. A naval force of 21,000 was included in the effort. Ray Huang, a Chinese-American philosopher and historian, estimated that the combined strength of the Chinese army and navy at the height of the second campaign was around 75,000.

Prior to the battle, the previous naval commander Yi Sun-sin, had been removed from his post. The less experienced Won Gyun was promoted in Yi's place. Won Gyun set sail for Busan on 17 August with the entire fleet, some 200 ships.

The Korean fleet arrived near Busan on 20 August in 1597. As the day was about to end, they met a force of 500 to 1,000 Japanese ships arrayed against them. Won Gyun ordered a general attack on the enemy armada, but the Japanese fell back, letting the Koreans pursue. After a few back and forth exchanges, with one chasing the other, one retreating, the Japanese turned around one last time, destroying 30 ships and scattering the Korean fleet. His ships were overwhelmed by arquebus fire and the traditional Japanese boarding attacks, which largely resulted in the destruction of his entire fleet. Bae Seol shifted 12 ships to an inlet farther down the strait and managed to escape.

Hwangseoksan Fortress consisted of extensive walls that circumscribed the Hwangseok Mountains and garrisoned thousands of soldiers led by generals Jo Jong-do and Gwak Jun. When Katō Kiyomasa laid siege to the mountain with the Army of the Right, which he attacked at night under the full moon, the Koreans lost morale and retreated with 350 casualties. The successful siege did not, however, lead to a subsequent advance from beyond Gyeongsang Province.
1597 Sep 30

On 16 October 1597, Kuroda Nagamasa's force of 5,000 arrived at Jiksan, where 6,000 Ming soldiers were stationed. Kuroda's forces charged the enemies and was soon joined by the rest of the army, bringing Japanese forces to 30,000. Although heavily outnumbering the Ming, the Japanese were unable to do much damage due to the Ming's superior armor. According to Kuroda and Mōri Hidemoto, their firearms could not penetrate the iron shields used by Chinese soldiers, and their armor was at least partially bulletproof. The battle continued until dusk when the two sides withdrew. Jiksan was the furthest the Japanese ever got towards reaching Hanseong during the second invasion. Although they were forced to withdraw at Jiksan, it was not a major loss, and resulted in an orderly retreat south by the Japanese.

With only 13 ships remaining from Admiral Won Gyun's disastrous defeat at the Battle of Chilchonryang, Admiral Yi held the strait as a "last stand" battle against the Japanese navy, who were sailing to support their land army's advance towards the Joseon capital of Hanyang (modern-day Seoul). The dense formation of Japanese ships crowded in the narrow strait made a perfect target for Joseon cannon fire. By the end of the battle, approximately 30 Japanese warships were sunk. The immediate results of the battle were a shock to the Japanese command. Joseon and Ming armies were able to regroup.

The battle began with a false retreat that lured the Japanese garrison into a frontal attack. They were defeated with 500 losses and were forced to retreat to Tosan fortress. The allies occupied the city of Ulsan. On 30 January the allies bombarded the fortress and then took the outer wall of Tosan. The Japanese abandoned much of their food supplies and retreated into the inner fortress. The allies assaulted the inner fortress, at one point even taking a portion of the wall, but suffered heavy casualties. On 19 February the allied forces attacked again and were repelled. Seeing Japanese reinforcements arrive, Yang Hao decided to lift the siege and retreat, but the disorganized movement led to many stragglers being cut down by the Japanese, leading to heavy casualties.
Source:Wikipedia Link
1598 Sep 18

The Council of Five Elders, in late October, issued orders for the withdrawal of all forces from Korea. Hideyoshi's death was kept a secret by the Council to preserve the morale of the army.
1598 Nov 6

The Chinese believed that Sacheon was crucial to their goal of retaking the lost castles in Korea and ordered a general attack. Although the Chinese made initial progress, the tide of battle turned when Japanese reinforcements attacked the rear of the Chinese army and the Japanese soldiers inside the fortress sallied from the gates and counter-attacked. The Chinese Ming forces retreated with 30,000 losses, with the Japanese in pursuit. According to Chinese and Korean sources concerning the battle, the forces led by Dong Yi Yuan had breached the castle wall and were making progress in capturing the castle until a gunpowder accident caused an explosion in their camp, and the Japanese took advantage of the situation to rout the confused and weakened troops.

The Battle of Noryang, the last major battle of the Japanese invasions of Korea (1592–1598), was fought between the Japanese navy and the combined fleets of the Joseon Kingdom and the Ming dynasty.

The allied force of about 150 Joseon and Ming Chinese ships, led by admirals Yi Sun-sin and Chen Lin, attacked and either destroyed or captured more than half of the 500 Japanese ships commanded by Shimazu Yoshihiro, who was attempting to link-up with Konishi Yukinaga. The battered survivors of Shimazu's fleet limped back to Pusan and a few days later, left for Japan. At the height of the battle, Yi was hit by a bullet from an arquebus and died shortly thereafter.

The war left significant legacies in all three countries. In the context of Japanese imperialism, the invasions are seen as the first Japanese attempt to become a global power. The partial occupation of Korea developed the Japanese concept that Korea belonged within Japan's sphere of influence, and the Japanese leaders of the late 19th and the early 20th centuries used the 1592–1597 invasions to reinforce the justification for their 20th century annexation of Korea. Yi-Sun Sin's accomplishments in the war also inspired Japanese naval officers during the 19th and 20th century, with many of them citing the importance of studying his battle tactics to further strengthen their navy.

In China, the war was used politically to inspire nationalistic resistance against Japanese imperialism during the 20th century. In Chinese academia, historians list the war as one of the Wanli Emperor's "Three Great Punitive Campaigns". Contemporary Chinese historians often use the campaigns as an example of the friendship that China and Korea shared.

In Korea, the war is a historic foundation of Korean nationalism and, as in China, inspired and politically used to instigate nationalistic resistance against Japanese imperialism during the 20th century. Korea gained several national heroes during the conflict, including Yi Sun-sin and Chen Lin (founder of the Gwangdong Jin clan). Modern anti-Japanese sentiment in Korea can be traced as far back as the Japanese invasions in 1592, although the principal cause is rooted in more recent events, particularly the hardships suffered by Koreans during the Japanese occupation of Korea from 1910 through 1945. 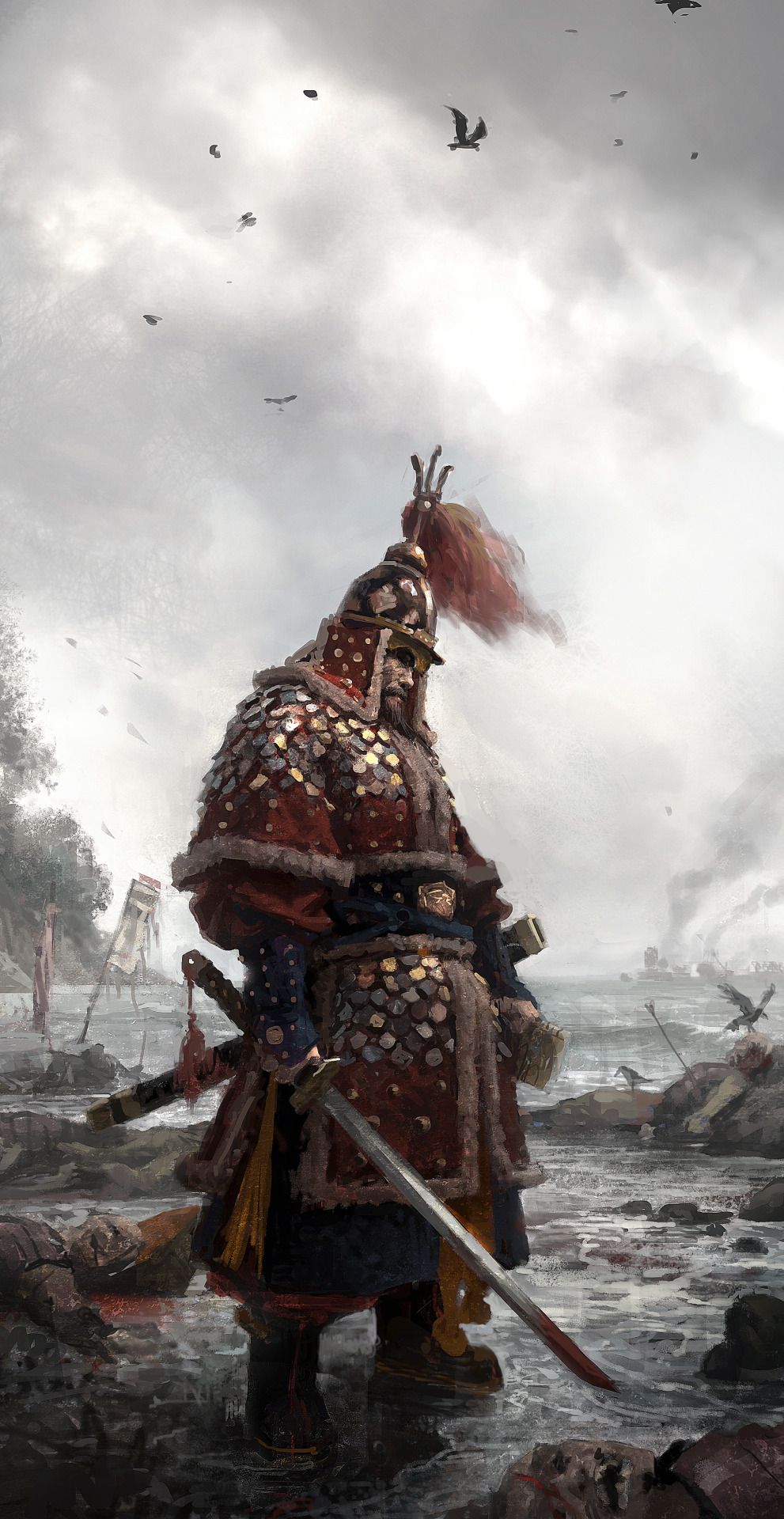 How well do you know the Chongyu War?
Play Timelines